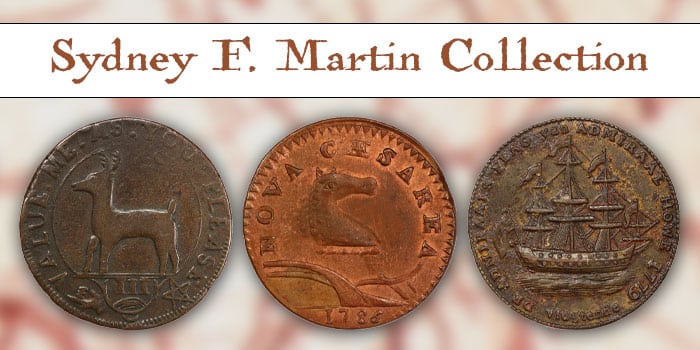 For three decades, Sydney F. Martin of Doylestown, Pennsylvania and Amelia Island, Florida, was a preeminent figure in American numismatics. He served as president of the American Numismatic Society (ANS) and was the author of standard references on four early American numismatic specialties. Mr. Martin was a graduate of the Massachusetts Institute of Technology (MIT) and founder of The Sytex Group, which provided services to the defense and intelligence communities before its acquisition by Lockheed Martin in 2005.

Stack’s Bowers Galleries, selected as the auctioneer of Martin’s vast collection of early American coins, tokens, medals, and paper money, will feature the inaugural offering from the collection in its August 2022 Global Showcase Auction. Presented in a meticulously researched stand-alone catalog will be over 260 coins and medals – including his front-line collections of New Jersey and Massachusetts coppers, both among the finest holdings in these series ever assembled.

“Syd was a completist by nature,” commented John Kraljevich, lead cataloger for the Syd Martin Collection, “so it is not surprising that he gathered up 113 of 145 confirmed die pairings of New Jersey coppers. Collecting over 100 of these die pairings is a major feat, but getting to 113 puts him in rarefied company.”

Included are major rarities in the series such as the 1786 Maris 9-G “No Coulter” variety graded PCGS VF-30, as well as superb quality pieces like the 1786 Maris 21-N graded PCGS MS-65+ Red-Brown, one of the very finest known New Jersey coppers of any variety.

The Massachusetts half cents and cents dated 1787 and 1788 are even more complete, as Martin meticulously gathered 46 of the 51 known die pairings in the series.

“Syd vied not only for completeness in the series but also hunted down the very best coins he could find privately and in the major auctions of the last two decades,” mused Kevin Vinton, Senior Numismatist and specialist in early American coinage. “His Massachusetts coppers have the highest average quality of any of his collections and are among the very best collections of these ever assembled–an incredible 32 of his 46 die pairings are between AU-55 and MS-65 in grade.”

By example, Martin’s 1787 Ryder 4-J, one of fewer than a dozen known, is graded PCGS MS-64 Brown and is the finest known by nearly 40 grade points.

Rounding out this initial auction are incredible offerings of Saint Patrick coinage, Higley coppers, Pitt tokens, Rhode Island ship medals, and Libertas Americana medals—all of these series are essentially complete by type and metal. Martin is probably the only collector who attempted to build a complete set of Higley coppers by die marriage, gathering 13 of the 16 known in private hands. Six will be included in the August auction, representing each of the major Red Book listed types. Among them is an incredibly choice, PCGS VF-30 example of the 1737-dated variety with VALUE ME AS YOU PLEASE legend that was once in the Roper Collection.

Also tracing its lineage to the Roper Collection is the unique 1778 Rhode Island Ship medal with VLUGTENDE in the legend, graded PCGS AU-55. Its provenance extends back to the late 19th century and includes the famed Ellsworth and Garrett collections as well as, more recently, the John Adams Collection.

Providing a coda to the initial offering from the Sydney F. Martin Collection is a silver and bronze pairing of the most famous and eagerly sought of early American medals: the (1783) Libertas Americana medal that was the brainchild of Benjamin Franklin. Martin’s silver example, beautifully toned in a panoply of color, is graded MS-62 by PCGS.

“This first auction from Syd’s collections is the culmination of planning that began with Syd shortly before his passing in January 2021,” commented Vicken Yegparian, Vice President of Numismatics. “We are extremely proud to be able to reintroduce these collections into the marketplace in a manner consistent with Syd’s desires. He collected six-figure rarities as well as very modestly priced coins because he felt both are important to the study of early American numismatic history. This auction will give voice to both.”

Part I of the Sydney F. Martin Collection will be sold as part of Stack’s Bowers Galleries’ August 2022 Global Showcase Auction during the week of August 22 at Griffin Studios in the firm’s Costa Mesa, California headquarters. The catalogs will be available online and in print in late July, and requests for printed catalogs should be directed to [email protected]. For more information about the Sydney F. Martin Collection, please contact Kevin Vinton ([email protected]) or Vicken Yegparian ([email protected]).