A new wave of counterfeit PAMP Suisse gold bars are making the rounds. These new fakes show much better quality than earlier attempts, especially with the packaging. Previous fake PAMP gold bars have been easily detected when compared to the real thing (see image, below). These new fakes not only have a better strike quality than previous examples, but there are no obvious errors in the packaging. Retail customers who are not familiar with the size and appearance of real PAMP Suisse gold bars could easily be duped. 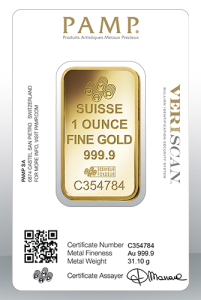 To combat these more sophisticated fakes, PAMP Suisse has developed a new technology called VeriScan. This system takes extremely close, high-resolution photos of each bar while they’re still in production. It then pairs that image to the serial number stamped on the bar. By using a Canon flatbed scanner or purpose-built scanner, anyone can scan a bar and have the VeriScan software compare it to the photo stored at PAMP headquarters. This allows you to verify the authenticity of a bar without removing it from its sealed packaging.

Another faster way to test any gold bar is by using the Precious Metals Verifier from Sigma Metalytics. This handheld scanner has the metallic signatures of many different fineness levels of gold and silver products. It can even test platinum and palladium bullion. There is no damage to the coin or bar from testing, since it uses magnetic waves. It can even test certified coins sealed inside a hard plastic holder. For ways to guard against buying counterfeit precious metals, read our guide “Don’t Be The Fool When Buying Gold.” You’ll learn such techniques as using a magnetic to detect ferrous (iron) metal cores of counterfeits, and the “ping” test for silver coins.

Of course, the best protection against counterfeits is to only buy from a precious metals distributor that professionally tests every item before offering it for sale.