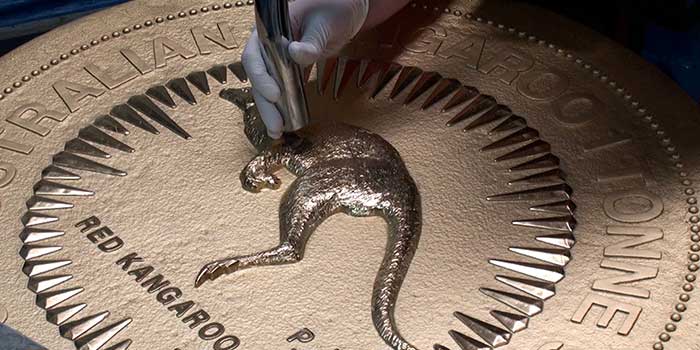 For one day only on July 16, Australia’s greatest gold coin icon will make its debut in the United States right outside the New York Stock Exchange. The Perth Mint is proud to bring the biggest, heaviest, inherently most valuable gold coin on earth to the US. The “1 Tonne Australian Kangaroo” was created by Australia’s international precious metals mint in 2011 and entered into the Guinness World Records in 2012 as the largest gold coin in the world.

Where: In Experience Square outside the New York Stock Exchange on Broad Street

Opportunities: Collectors and admirers are encouraged to bring their cameras for this once-in-a-lifetime opportunity Authorized by the Commonwealth of Australia’s Department of Treasury, this gargantuan coin weighs in at 1 metric ton – over 2,200 pounds – of 99.99% pure gold coin. The coin is massive, measuring 80 cm – almost 3 feet – wide and 12 cm – almost 5 inches – thick. This coin is issued as legal tender in Australia with a face value of $1 million, but its worth in gold, at today’s spot prices, is over $49 million!

Want to see how this extraordinary gold coin was made? Check out this Perth Mint video on its creation:

For 120 years, the Perth Mint has been a world leader in the production of exquisite bullion that meets the highest weight and purity standards. The obverse of this 1-ton gold coin Kangaroo features Ian Rank Broadley’s portrait of Her Majesty Queen Elizabeth II, similar to all official coinage in Australia. The reverse features the classic Red Kangaroo design by Dr. Stuart Devlin, goldsmith and jeweler to Her Majesty Queen Elizabeth II. The Kangaroo is depicted in mid-hop against a sunburst pattern, indicative of the outback’s rising sun.

This marvel of ingenuity has lived on display at the Perth Mint for the past several years, until now. But hurry, it hops back to the land Down Under after only one day on display of the gold coin in the United States.

Dallas-based Provident Metals is an online retailer of international and domestic bullion, currency, numismatic coins and other investment-grade metals. From the ground up, Provident Metals was built to meet bullion investors’ unique needs. The company’s commitment to providing products with good customer service in the industry has propelled the firm to become a premier online destination for sovereign and domestic bullion from around the world. For more information on Provident Metals go to www.providentmetals.com or call 800-313-3315.