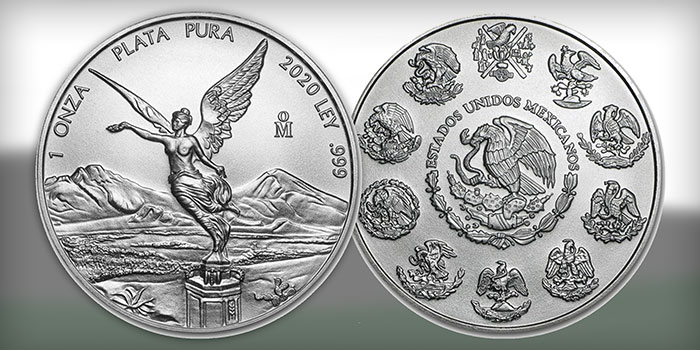 One such mystery is exactly why the popular Mexican Libertad series of silver and gold coins only began to see the release of its 2020 coins in late September, and that was only the coins sold within Mexico. In prior years, coins were sometimes delayed until the summer due to production issues or changes in the government, but to the best of my knowledge, they have never been delayed as much as they were this year.

Sales to foreign markets, including the United States, Europe, and Asia through the Mexican Mint’s network of distributors only began in late October to early November when major foreign bullion dealers finally learned of their limited allocations of this year’s Libertad coins, which will actually hit those markets around mid-December.

In 2020, all major world mints were confronted with challenges they had never dealt with before because of the COVID-19 pandemic. This is clearly a new era for all mints. Many had to shut down temporarily to institute new procedures to protect their employees and to thoroughly clean work areas, and many struggled to keep up with, let alone meet, rising demand for precious metal coins during the past year. (rising prices and demand for metals being yet further results of the severe economic dislocations caused by the pandemic, which, combined with low interest rates, make riskier assets like stocks and precious metals more attractive).

Mexico, the Pandemic and Libertads

But the Casa de Moneda in Mexico appears to have been impacted to a greater degree than the others. The main reason is simply that Mexico has been hit very hard by the coronavirus, with its number of confirmed cases about to surpass one million and deaths due to the virus of over 95,000. Keep in mind that the actual number of cases in Mexico is undoubtedly much higher because testing for the virus has lagged greatly there. On August 1, Mexico’s death toll became the world’s third-highest at that time at 46,688.

Pat Stovall of Lois and Don Bailey and Son Numismatic Services, one of the Mint’s U.S. distributors based in Houston, Texas, told me that when he was in Mexico in the spring he was struck by how severely the country was being impacted by the virus, noting that when he passed cemeteries he saw many dead bodies waiting to be buried and that most people were wearing masks and observing the COVID protocols like social distancing. As for the Mint, Pat said that around this time it had to shut down completely and that he believes some mint employees died as a result of the virus while many others were sent home and did not want to return to work due to the increased danger. In addition, production was slowed with many employees working at home, and when it came time to ship the minted coins to the Banco de Mexico that oversees the Mint for quality control inspection, it was just not possible to do that as efficiently as in the past with fewer employees.

As discussed below, this year’s Libertads include some very low mintages. Take the gold Proofs, which, at 250 coins each and no five-coin sets issued this year, will be tied as the key date, lowest-mintage coins of this type with the 2014 gold Proofs. There are also several other coins, especially among the silver issues, that will be some of the lowest in the almost four decades the coins have been made (1981 for the gold and 1982 for the silver). Currently, a Proof 70-graded set of the 2014 five-coin gold Proofs runs $15-17,000!

As to why there are so many low mintages this year, the delays in production and quality control were likely key factors – coupled with the fact that the bank allows pre-sales to employees. Pat said he thinks it is likely there were more of those sales this year.

He added that some have speculated that another reason for the delays and low mintages is that more of this year’s coins may have remained in Mexico. While he is not certain, Pat does not think a larger-than-usual number of coins were reserved for domestic sales. The problem is, no one outside the bank ever has any idea how many coins are sent to each major market, but there have been reports in recent years that more coins remained in Mexico due to the growing market for Libertads there.

The low 2020 mintages were essentially due to the sales windows being much shorter than usual. Plus, there were only a few weeks to distribute the coins before preparing for the 2021 releases.

Overall, Pat noted, “There just were not enough coins to meet the demand.”

And that, in a nutshell, is why prices have been rising for the 2020 coins.

Keep in mind that mintages for Libertads, which were just made available by the bank through Pat on November 9, are never released until sales of the coins to the Mexican Mint’s distributors have all been allocated. Even many dealers do not yet know these figures.

One of the most notable low mintages this year is the one-ounce Brilliant Uncirculated silver coin, the most widely collected size of Libertad because many people are building complete sets of them. Many are sold after being graded since, like other major bullion coins, they almost all grade MS69 or 70 today unlike in the past.

Pre-sales of the 2020 one-ounce piece began in the U.S. market last week at several major dealers, and in each case they sold out within a very short period of going on sale – in some instances within the hour. No one knows how many of the 300K mintage will reach American shores. But given Mexican sales and those to Europe and Asia, it’s not likely to be much more than about 100,000 or so.

In the months leading up to the start of foreign sales, eBay pre-sales were in the $45 range, but recent sales by U.S. bullion dealers were in the $30-35 range, which, when combined with the mintage, explains why they are such a hot commodity and disappeared so quickly. Buyers knew those were good deals!

As this is being written, several foreign companies are offering this coin for about $40 each. But on eBay offers include $60 for one of the one-ounce coins, or $1,500 for a roll, with delivery in late December or January.

And completed sales in November for coins in hand, which must have been obtained in Mexico, were $69-100. It remains to be seen if $60 and over holds. But even if it doesn’t, something in the range of $50 seems quite possible with future values dependent on whether there are other years with mintages as low as 300,000.

The remaining coins mostly have similar mintages to those of recent years, though the one-ounce gold BU is fifth lowest at 1,100, and with mintages of 700 each for the other gold BU coins, expect a race to obtain those coins. The same likely will be the case for the gold Reverse Proofs that will remain at 500 each for the one and half-ounce pieces like last year.

In addition, even if the others are not among the very lowest of this long-standing series, their mintages are extremely low in comparison to those of coins from most other mints.

Even more so than in several recent years when the series ran into delays and production issues, 2020 has been an unusual issue for the Libertad series because of the pandemic’s impact on coin production in Mexico. And once again, the series presents buyers and collectors with some excellent opportunities to obtain coins with great potential for price appreciation – provided that you’re able to obtain them at bullion-related prices.

Finally, 2021 and 2022–when the gold and silver Libertads mark their respective 40th anniversaries–are just around the corner. There’s a good chance the Mexican Mint will come up with something special for that.