In 1997, the United States Mint launched the American Platinum Eagle program to compete with other world mints that were already issuing platinum coins.

Platinum Eagles were issued in four sizes: one ounce ($100 face value), one-half ounce ($50), one-quarter ounce ($25), and one-tenth ounce ($10) coins in bullion and Proof versions. This continued through 2008, and then no platinum bullion coins were made from 2009 to 2013. Since 2014, only the one-ounce bullion coin has been produced, and since 2009, only the one-ounce Proof coin for collectors has been made.

This series is notable for the fact that there are different designs on the reverse of the Proof coins than on the bullion issues. The Proof coins have focused on aspects of the history and government of the United States, such as the branches of government and the Constitution.

In addition, from 2006 to 2008, the Mint issued Uncirculated platinum coins on specially burnished planchets that featured a “W” mint mark for the West Point Mint that struck them and reverse designs that matched those of the respective year’s Proof issue. In 2008, sales for this third type of platinum coin were impacted by the combination of an unusual range of U.S. Mint products from regular bullion and Proof gold, silver, and platinum coins to Buffalo gold bullion and Proof, Burnished silver, gold, and platinum and commemoratives. Plus, the price of platinum saw unprecedented volatility that year, starting at $1,500 per ounce before reaching $2,000 by mid-year and later collapsing to $900 towards the year’s end. Those two forces served to drive down demand for many products that year, especially for the newer offerings like the Burnished platinum issues.

As a result, sales of the half-ounce and quarter-ounce Burnished platinum coins were remarkably low that year, with respective mintages of just 2,253 and 2,481. These two coins became the overall lowest mintage and rarest modern U.S. coins ever issued until some years later when several of the $10 First Spouse gold coins came in with mintages that were lower. Currently, the 2016 Betty Ford Mint State coin is the lowest modern issue with 1,824 coins sold.

On the platinum Proof coins issued in 2007 that celebrated the executive branch of government, the reverse design featured an eagle with its wings stretched out and a shield at its breast over which is draped a ribbon with the inscription “Freedom”. 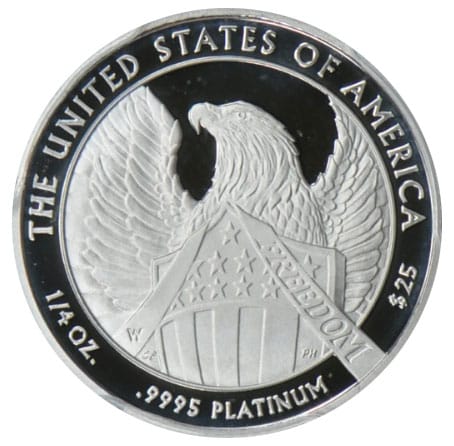 The word “Freedom” appears in brilliant, mirrored finish letters that contrast with the frosted ribbon on which it appears. But in February 2011, collector Jason Fishman discovered on a $100 Proof coin that the lettering for “Freedom” was instead frosted, which blends in with the rest of the design that is also frosted.

Fishman’s coin is considered the discovery coin for this super-rare platinum variety. It was initially thought to be a die polishing error when he submitted the coin for grading. The Mint later confirmed the existence of such coins and said they were pre-production strikes prepared to see how the different types of lettering would look on the coin and that they were “inadvertently placed in the production stream during preparation for an internal audit.”

The Mint also revealed that in total 12 of the $100 and 21 each of the $50 and $25 Proof coins were of this extremely rare variety. No tenth-ounce coins were made.

The Cherrypicker’s Guide to Rare Die Varieties of United States Coins calls these coins “patterns”, and experts say they are comparable to the rare “Cheerios” variety Sacagawea $1 coins.

So far only one each of the $50 and $100 coins has been reported. More of the coins the Mint said were struck are out there!

These coins are likely to remain the kings of the platinum series and among the very rarest of all modern U.S. coins.