The 2020 “Pursuit of Happiness” Preamble to the Declaration of Independence Proof Platinum American Eagle marks the end of a three-year series produced by the United States Mint since 2018. The one-ounce platinum coins, struck at the West Point Mint and bearing a “W” mintmark, are being issued alongside the bullion-quality platinum offerings as part of the larger American Eagle coin program that also includes silver, gold, and palladium coinage.

The 99.95-fine one-ounce platinum coins with a $100 face value are presently the only type of platinum bullion coin offered by the United States Mint. However, for several years after the launch of the Platinum Eagles in 1997, the Mint also produced the platinum coins in other sizes and denominations, including a tenth-ounce coin with $10 face value, a quarter-ounce piece worth $25, and a half-ounce issue denominated at $50.

The fractional issues came to an end after the release of the 2008 issues, continuing on with only the $100 One-Ounce Platinum Eagle. In the years since, the United States Mint has issued bullion-quality coins with a static obverse design depicting the head of the Statue of Liberty and the reverse carried by a flying eagle. Meanwhile, from 1997 through 2017, the Proof versions of the one-ounce platinum coins have carried a common obverse and different reverse design each year. In 2018, Proof platinum coin production shifted to the creation and execution of the Preamble to the Declaration of Independence series, which has a common reverse and different obverse designs.

The Last of the Series

When the U.S Mint launched the Preamble to the Declaration of Independence series in 2018, the goal was to honor the three pillars of American freedom as delimited in the Declaration: life, liberty, and the pursuit of happiness. Each issue in the three-coin series honors these ideals by way of special designs, with the first coin in the series, the 2018 Proof Platinum Eagle, depicting “Life” and the second, struck in 2019, honoring “Liberty”. All three unique obverse designs for the Preamble to the Declaration of Independence coins have been carried out by designer Justin Kunz, while the common reverse was designed by Patricia Lucas-Morris and engraved by Don Everhart.

The obverse of the 2020 coin, sculpted by Michael Gaudioso, showcases an agricultural landscape as the backdrop for the design, which shows Miss Liberty holding a bundle of freshly harvested produce in a plowed field as a young girl, holding an olive branch in her right hand, playfully outstretches her left arm toward a floating butterfly.

The United States Mint colorfully narrates the symbology in the bucolic scene:

“Lady Liberty harvesting the fruits of her labor with a young girl at play nearby. The overflowing cornucopia she carries is a symbol of the physical, intellectual, and spiritual bounty only liberty makes possible – the good things that nourish the body, enliven the mind and satisfy the soul. The home, orchard, and silo represent American hopes, values, and aspirations and bring to a close the narrative told throughout the backgrounds of the series – from the furrowed earth to prairies and mountains, and finally to an agrarian field. The stubble field alludes to the ingenuity and exertion required to claim liberty’s promise.”

The obverse also features a variety of inscriptions, including the thematic “Happiness” in an ornamental cursive script. Other lettering on the obverse includes E PLURIBUS UNUM, IN GOD WE TRUST, and LIBERTY, along with the coin’s date 2020. The initials of artist Justin Kunz and engraver Michael Gaudioso are seen as “JK” and “MG”, respectively.

The common reverse seen on the three Preamble to the Declaration of Independence Platinum Eagles is anchored by an eagle in flight with an olive branch in its talons. The reverse inscriptions include UNITED STATES OF AMERICA, .9995 PLATINUM, 1OZ. and the denomination is stated as $100, with the “W” mintmark from the West Point Mint on the right side of the reverse between the eagle’s tail feathers and the rim. The initials of artist Patricia Lucas-Morris and Don Everhart are represented on the coin’s reverse as “PLM” and “DE”.

The 2020 Pursuit of Happiness coin is to be released on January 30, 2020, at noon Eastern Standard Time. It has a mintage limit of 13,000 pieces and will be launched with an ordering limit of just one coin per household. While the issue price for the 2020 Pursuit of Happiness Proof has not yet been made available to the public, the other two coins in the Preamble to the Declaration of Independence series are still for sale on the U.S. Mint website and are presently offered for $1,370 USD. It should be noted that the two earlier coins in the series have higher mintage limits than the 2020 issue, with a maximum of 20,000 pieces for the 2018 coin and 15,000 for the 2019 offering.

The Preamble to the Declaration of Independence Platinum Proof One-Ounce Eagle series offers some of the most beautiful designs offered on any United States platinum coinage. But the series has seen only moderate commercial success. This conclusion is objectively borne out in the sales data currently available for the series.

According to the latest sales data made available by the United States Mint, only 13,572 examples of the 2018 platinum coin were sold through November 3, 2019, while the 2019 issue saw 9,534 pieces distributed up to that same time period. While these are fairly strong numbers, the fact that neither issue has sold through their relatively limited production runs as of January 2020 suggests that either not enough people know about these coins or, perhaps more likely, potential customers are just deciding to spend their numismatic money elsewhere. 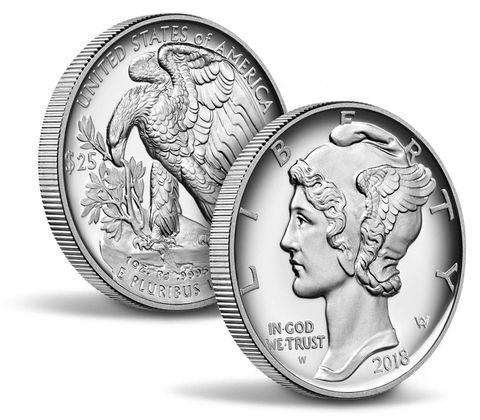 To be fair, the Platinum Eagles represent a major purchase for many investors and collectors, with each coin selling well north of $1,000 apiece due to the current value of the white-colored precious metal. The pool of collectors and investors who can afford to spend four figures each year on a new coin is rather small. Yet the Palladium Eagle, which the United States Mint began selling in 2017, has been a surefire sellout at 15,000 pieces or more per run and is offered at a roughly equivalent issue price.

That result may have something to do with the fact that the Palladium Eagle features two beloved designs by iconic United States coin designer Adolph A. Weinman: his Winged Liberty (“Mercury”) design from the dime of 1916-1945 is featured on the obverse and a majestic eagle motif, seen on the designer’s 1907 American Institute of Architects annual gold medal, graces the reverse.

What will it take to see the Preamble to the Declaration of Independence Platinum Eagles inspire a stronger following? Perhaps an increase in bullion prices could help. Greater commercial exposure for this three-coin series by way of mass-market promotions may be another viable path toward better long-term sales results. Or maybe, like so many other relatively expensive United States bullion issues (hello, First Spouse Gold Coins), the series may retire into relative obscurity, perhaps only to be blissfully rediscovered down the line by a future generation of collectors.