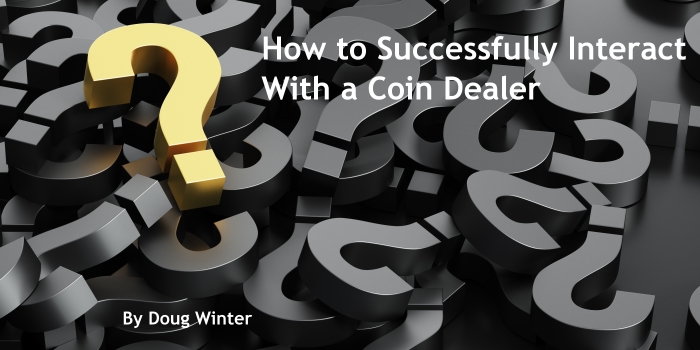 How to Ask a Coin Question by Doug Winter – RareGoldCoins.com ……

A day rarely passes without a non-collector calling me or emailing me with a question (or questions) about a coin or a collection of coins that they own. Some of these interactions are disasters from the get-go. Here are some of my suggestions on how to ask me about your coin(s) in a way that works for both of us.

Tell me your name. Don’t begin the conversation by immediately asking your question; that’s just rude. I’d suggest you start as follows: “Good Morning, my name is Jim Smith and I was wondering if I could ask you a few questions about a coin I own.” Your last name is handy unless you are someone like Madonna or Prince; then you don’t need to let me know.

Be polite. You wouldn’t call a random doctor and bark questions at him about your aching back, would you? We’ll get along a lot better if you are friendly and appreciative and don’t act like a jerk.

Be prepared. If you want to know the value of a specific coin, let me know exactly what the coin is. The quickest way to lose my interest is to not have at least some of the details prepared.

Along the same line, be organized if you have a collection. Present your holdings with a spreadsheet that clearly lists the coins you own. In other words, do the heavy lifting so that I don’t have to. Your inventory should list the date and denomination of each coin (unless it’s part of a large set), as well as the grade and grading service if it has been encapsulated by a third party (i.e., PCGS or NGC).

If you send me an image, make sure it is clear. I can’t begin to tell you the number of times someone has sent me an image and it is blurry or dark or way too small. A good cellphone will invariably have a good quality camera. Practice using it before you send a photo and send yourself an image of the coin before you send it to me. If you can’t see the coin clearly, the chances are that I can’t either.

Don’t be greedy. My time–not to mention your time–is valuable and I may not be willing or able to spend 10 minutes with you going over a long list of coins. It’s best if you cut to the chase and tell me your star coins first.

Choose the right dealer to ask. A dealer such as me who specializes in American coins is probably not the right person to ask about your ancient coins. If you’ve selected the wrong dealer, politely ask me if I can recommend another dealer who might know the answer.

Don’t be combative. Your 1804 silver dollar or your 1943 copper penny is almost certainly not genuine, even if it’s been in your family for generations. If you insist that it’s real, go ahead and send it in to PCGS or NGC yourself. If you are absolutely certain that your 1804 dollar is real, you don’t need me to authenticate it, do you?

Don’t send SCREAMING emails. I automatically delete emails sent to me which use all capital letters.

Don’t tell me that another coin that is “just like” your worn 1881-S silver dollar is listed on eBay for $150,000. That listing is insane and if I can’t convince you of this, then I will think you are as well.

As a retail dealer, I welcome calls, emails, and texts from novices about their coins. I have purchased some of my best coins or collections from people just like you who inherited pieces from their parents or grandparents, and if you follow some of the suggestions I made, we are likely to have a mutually beneficial interaction.

Acknowledged as one of the leading specialized numismatic firms, Doug is the award-winning author of over a dozen numismatic books and a recognized expert on US Gold. His knowledge and an exceptional eye for properly graded and original coins have made him one of the most respected figures in the numismatic community and a sought-after dealer by collectors and investors looking for professional personalized service, a select inventory of impeccable quality, and fair and honest pricing. Doug is also a major buyer of all US coins and is always looking to purchase collections both large and small. He can be reached at (214) 675-9897.