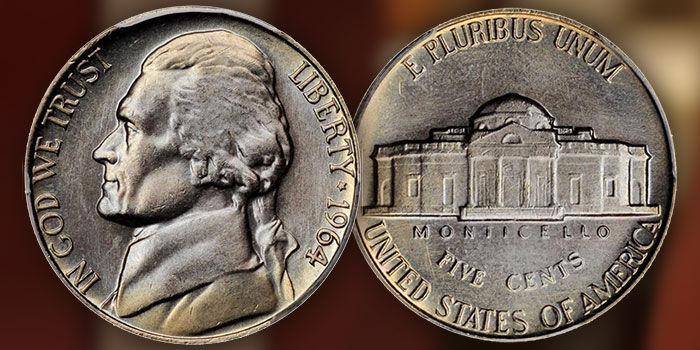 At the ANA Convention in Cleveland in 1964, Felix Schlag, designer of the Jefferson nickel, addressed the Educational Forum and shared some details of his life and behind-the-scenes details of the design’s origins.

“The fundamental object for me,” he said, “was to find a likeness that portrayed the character and strong facial features of the great American as I imagined him.”

As he shared his experience, record numbers of coins bearing his designs were being struck. The mid-1960s saw a massive and well-documented surge in coinage production; 1964-dated Jefferson nickels were struck in massive quantities. Its record mintage makes it an accessible date, abundant enough that examples still appear in circulation with some regularity.

In the mid-1960s, the United States was in the throes of a major coin shortage, and Congress and the United States Mint had to get creative to meet demand. Surging silver prices and vending machines drove subsidiary coinage from circulation, though Congress and the Mint tried to blame collectors. A document published by the Federal Reserve Bank of St. Louis in July 1964 outlined the situation:

“Deliveries of new coin from the Mint have risen, but this added supply has been more than offset by the drying up of return flows of coin from circulation… inventories have fallen to the point where the Reserve Banks have been unable to deliver coins on request, but instead have been forced to ration coins in order to distribute the limited supply on a fair basis.”

On September 3, 1964, President Lyndon B. Johnson signed legislation authorizing the Mint to strike coins dated 1964 past the end of the calendar year. This measure sought to dissuade hoarding, though some legislators were skeptical of its efficacy.

1964-dated Jefferson nickel mintages were significantly larger than any previous year, owing to the expanded production and date freeze. 1,028,622,762 were struck at the Philadelphia Mint in 1964 and 1965, surpassed only by the Denver facility’s output of 1964-dated nickels, 1,787,297,160. For a sense of how much larger than normal these mintages were, the Philadelphia Mint struck just over 100 million nickels in 1963.

Mintages of nickels bearing a single date wouldn’t reach levels comparable to 1964 until the late 1990s.

The Mint Director’s Report for Fiscal Year 1964 sheds light on other measures taken by the Mint to expand production:

“Rolled nickel strip, ready for blanking, was purchased from private industry for use in the five-cent cupronickel coinage. This procedure then permitted all of the melting and rolling capacity of the two Mints to be utilized in the production of the bronze cents and the silver subsidiary denominations.”

Other measures included having blanks polished at the Frankford Arsenal, suspending Proof coin production in the calendar year 1965 (a measure that would continue through 1967), resuming coinage at the San Francisco Assay Office, and purchasing more coining presses.

Towards the end of his remarks at the 1964 Cleveland ANA Convention, Schlag noted:

“A few years ago I retired. The Jefferson nickel popped up again. I was rediscovered, due to the upsurge of interest in coins. There were requests for my signature from collectors. One dealer came to me with a cartload of coin books to autograph. I found out that my signature was being sold, my letters of correspondence were being used for personal advantage, and books I signed were advertised for sale.”

Schlag’s annoyance or bemusement with his demi-celebrity role reflects the popularity of coin collecting in the mid-20th century, and a national coin shortage might have made coins the object of public interest.

According to Bernard Nagengast’s The Jefferson Nickel Analyst, “With the very high mintage spread out over a couple of years… the 1964 appears in all conditions from low to high quality, so finding a decent coin is possible with some patience.”

In an email interview, Nagengast elaborated that the “strike on 1964 nickels varies from poor to decent. Many were struck from well-used dies… even coins from new dies don’t have strong details since the master hub which had the reverse design of 1940 was itself showing wear.”

There are a number of minor varieties of 1964 Jefferson nickel; Variety Vista lists 13 obverse and 65 reverse doubled die varieties.

Examples without Full Steps are affordable in virtually every available grade. Prices higher than $50 are an anomaly. Sharply-struck coins with the Full Steps designation are a different story; values cross the thousand-dollar threshold in MS-66FS and examples in MS-67 have crossed the block for five-figure prices.

PCGS reports 1,014 grading events of 1964 Jefferson nickels without Full Steps and 162 with that designation.

NGC reports 563 grading events of 1964 Jefferson nickels and 90 with the 5 Full Steps designation. No Full Steps examples are recorded. One doubled die overdate variety, designated VP-001, with doubling on the motto, is reported certified by NGC. A single example is reported.

The Mint’s massive 1964-dated nickel output, struck to meet the country’s seemingly insatiable demand for circulating coinage, can still be found in circulation and the billions of Jefferson nickels produced in 1964 and 1965 are accessible in almost all grades. If a 1964 nickel appears in your change, it may not be cause for celebration, but the coins are affordable artifacts of a turbulent period in the Mint’s history.

Atop the reverse is the motto E PLURIBUS UNUM (“Out of Many, One”). The name MONTICELLO–the placement of which on the coin was one of the revisions forced upon Schlag by the Mint–is found in a straight line immediately under the building; the positions and spacing of the other inscriptions had to be adjusted to make room for it. The denomination FIVE CENTS forms a gently curving line beneath that, and the inscription UNITED STATES OF AMERICA runs counterclockwise along the bottom edge of the coin.
Interestingly, Felix Schlag’s initials did not appear on a Jefferson nickel until 1966.

The edge of the 1964 Jefferson Nickel is smooth.