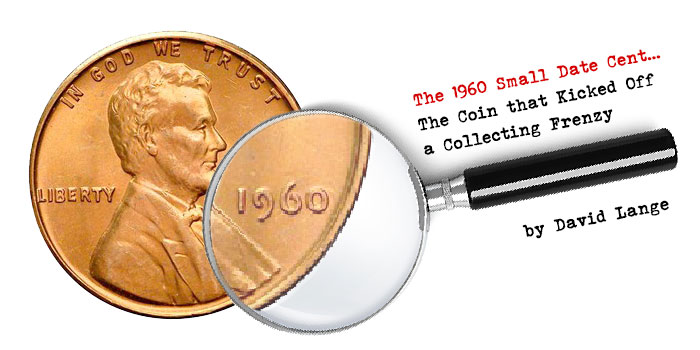 By David W. Lange for CoinWeek …..

There are a handful of events that have brought the hobby of collecting coins front and center in America’s consciousness.

Perhaps the first was the discontinuance of large cents in 1857 that set people scrambling to find one of every date while they lasted.

Another was the debut of the Lincoln cent in 1909, which caused a similar mad dash to get a specimen of the novel coin featuring the beloved and martyred president. The same may be said of the Kennedy half dollar’s highly anticipated release in 1964.

Yet there was one event that trumped them all in making the coin hobby a media sensation: the discovery of two date sizes on the cents of 1960. Coming at a time when the popular press increasingly was publishing accounts of coin hunters finding a fortune in their pocket change with 1916-D dimes and 1932-D quarters, the stage was set for a story that would grab the nation’s attention like no other previous coin discovery.

No One Will Notice

It started simply enough when the United States Mint’s Engraving Department grew concerned that the small size of the numeral “0” in the date of that year’s cents would cause the dies to chip or become clogged, replacing the delicate cipher with a round blob. Very early in 1960 the obverse master die was swapped out with one on which all four numerals had been enlarged. This was most noticeable as longer tails to the 9 and 6, but also distinctive is that the slightly oval 0 was enlarged and made perfectly round. This seemed to address the matter nicely, and new dies were prepared for both the Philadelphia and Denver Mints. There was no announcement made of this change, and everyone involved anticipated that no one would even notice.

How wrong they were.

Some 2,075,000 cents were coined at the Philadelphia Mint during January, with Denver striking 73,450,000. Production of cents then ceased in Philly while the new dies were being made, and no cents were struck there in February. Denver struck an additional 95,340,000 cents that month, but it’s uncertain whether they included a mix of sizes. A few dies were produced utilizing both the Small Date and Large Date hubs, resulting in coins showing an overlap of the two sizes. For the remainder of 1960, however, only Large Date cents were made. 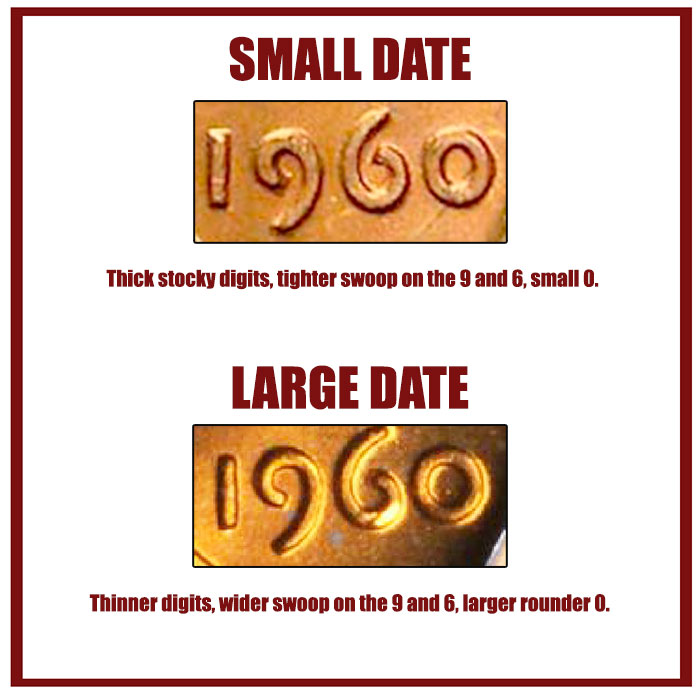 Had a change like that occurred just 10 years earlier, it likely wouldn’t have been spotted for many months. But in 1960 the coin hobby was richly populated with a new generation of collectors who passionately examined roll after roll of newly minted coins hunting for minor die breaks, filled letters, roving mintmark positions, etc. Every little anomaly was sent to hobby publications by excited collectors who, at that time, had very little knowledge of true varieties and mint errors. The editors to whom they sent in these mystery coins were only slightly better informed. In fact, there were many books dedicated to the subject of errors and varieties that were filled mostly with trivial flaws that today are largely dismissed by numismatic experts.

Perhaps the most prominent figure in the error/variety field at that time was Frank G. Spadone of East Orange, New Jersey. His Major Variety and Oddity Guide of United States Coins went through several editions during the 1960s, though its value today is mainly in amusement. At the time, however, he was considered an authority, and his monthly periodical, The Coin Press Magazine, enjoyed wide readership (it was later sold to Krause Publications, becoming Coins Magazine in 1962).

The May 12, 1960 issue carried the headline “FLASH – First True Die Variety in Fifty-one Years”. The cover also featured enlarged photos of two Lincoln cent obverses, one labeled “1960-D LARGE NARROW DATE” and the other “1960-D SMALL WIDE DATE.” This was the first public announcement of the two varieties of cent for that year, and it caused a sensation.

“We are proud to present this first hand [sic] exclusive discovery of a new die variety by our research department,” Spadone wrote. “This is not a mint error and can truly be classified as a variety. Sample copies have been sent to the U. S. Mint Director and we have every reason to believe it is the result of different dies used… A survey of both mint issues finds the Large Narrow date to be more common, giving us reason to believe the Small Wide date was discontinued early and the larger will continue on through the rest of the year… If the Small Wide date is as we ascertain, I would venture to say they will sell upwards of $50 per roll by the end of the year.”

Sending sample coins to the US Mint for inspection and comment initially prompted only denials. In the May 1960 issue of The Numismatic Scrapbook Magazine, Mint Director William H. Brett, using language that betrayed his lack of numismatic knowledge, declared “All U. S. one cent production stamping dies were forged from the same master hub containing the 1960 date element. No change was made.”

Eventually, the Mint had no choice but to acknowledge what was so plainly evident.

But this episode reveals that coin collectors were viewed by authorities with suspicion and no little hostility in those days. In the meantime, Spadone’s magazine announced a Medium Date variety, but this soon turned out to be just a later die state of the Large Date.

The weekly newspaper Coin World, which had debuted just a few months earlier, soon picked up the story of the Small and Large Dates, and it wasn’t long before the wire services were alive with accounts of the treasure to be found by Americans in their everyday pocket change or by searching through rolls of new pennies. Early predictions of high values for the 1960(P) Small Date cent proved to be self-fulfilling, as a brisk trade quickly developed in BU (Brilliant Uncirculated) singles and 50-coin rolls. Philadelphia dealer Harry J. Forman was advertising this issue at $110 per roll in November.

More conservative dealers and most veteran collectors dismissed these varieties as being of little or no consequence. During the 1960 convention of the American Numismatic Association, President Oscar H. Dodson described a mock educational program presented by the “National Association of Current Coin Collectors” at the “Gullible Plaza Hotel”. It included talks with titles such as “The Investment Value of the 235,000,000 Philadelphia Mint Cents Produced Through August 23”. Dealer B.M. Douglas in Washington, DC headlined his ad “No bags of 1960 coins, no large and small date 1960 cents…” Elston G. Bradfield, Editor of The Numismatist, advised readers, “Don’t become an addict to the 1960 cent craze; save your sanity.”

All of these disclaimers, however, just reveal how pervasive and widely publicized the Small Dates had become in a very short time.

It wasn’t long before someone tried to fake the hot 1960 Small Date cents. In the September issue of The Numismatist, it was reported that police in Denver had raided an operation that was creating 1960(P) Small Date cents by removing the mintmarks from 1960-D examples!

Another account told of a newspaper in Washington, DC that ran the headline “5 MILLION 1960 PENNIES WORTH WEIGHT IN GOLD.” It’s typical of the non-numismatic press to exaggerate the value of coin rarities or make obvious mistakes in reporting, but this only added fuel to the fire. By the end of 1960 everyone was on the hunt for the golden penny.

It took longer to determine whether the Proof cents of that year would yield both varieties. Prior to 1968, all Proof coins were made at the Philadelphia Mint, and it took quite a while for collectors to receive their annual Proof sets. While these days coins may be purchased from the U.S. Mint and delivered within days, such was not the case 60 years ago. Though Proofs began to be struck at the very beginning of the new year, it would take a couple of months for the first deliveries.

In its June issue, The Coin Press Magazine featured one of the very first reports. A reader wrote to editor Spadone:

As with the coins struck for circulation, the Proof Small Date variety proved to be much more elusive than the Large Date. While the mintage figures for each have never been determined, scholar Walter Breen estimated that from 100,000 to 200,000 of the 1,691,602 Proof cents bore the Small Date.

These, too, became speculative darlings, though after a few years their value would come crashing down.

Adjusting for 50+ years of inflation, that’s a mighty fall indeed.