First Read, a continuing series of essays about classic and contemporary works of numismatic literature …
The Confident Carson City Coin Collector is the most significant numismatic magnum opus published on the topic of American coinage since the 1987 publication of Walter Breen’s Complete Encyclopedia of U.S and Colonial Coins. It is a detail-rich, engrossing, epic work that presents history, commentary, and market data at such a high level that it will not only prove to be the definitive reference on the topic of collecting Carson City coins but also provides a successful formula that should be employed by other writers seeking to flesh out the story of American coinage at the other branch mints. 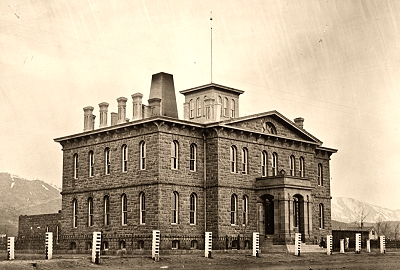 It’s not as if others couldn’t have tried to execute this formula, but it becomes quickly apparent upon reading that nobody outside of Goe speaks of the Carson City Mint and its coinage as fluently and has such a great eye for the market insights that collectors need before actually purchasing the coins themselves.

This is especially important since the Carson City Mint is one of the most commercially traded mints in the American coin market. In the book’s introduction, Goe describes a collector who walked into his coin shop with choice uncirculated Carson City Morgan dollars struck from 1882 to 1884, all in certified holders, that he purchased after seeing an ad in a magazine. Asking whether he got a good deal on the coins, Goe informed the collector that he had not and advised the collector to return them as the company’s return window had not yet expired. Goe, sensing that the collector had a real interest in learning about and collecting Carson City coins, began to work with him and before long the collector’s interest blossomed.

This anecdote can be writ large across a multitude of series specialties and speaks to the special relationship collectors should foster with the right dealers.

Over the course of more than 2,400 pages, Goe sets out to accomplish all five of his objectives. The historical narratives are constructed through meticulous research, copiously illustrated, and present the story of the Mint in an easy-to-read chronological pace. Frankly, we felt that Bowers and Galiette’s work in this space on Liberty Head Double Eagles 1849-1907: The Gilded Age of Coinage, published in 2013, reinvigorated this tried-and-true formula for numismatic books. Goe’s narratives go beyond the ones presented there. As for the coin-by-coin analysis, looking at the entry for the 1882-CC Morgan dollar, his collector would have benefited tremendously from the knowledge that this common-date issue had a survival rate of over 600,000 coins – meaning that there are more examples of this nearly 140-year-old silver dollar that survive in Mint State than several dates of Proof Silver Eagles struck for collectors over the course of that series’ run.

Goe also delves into market analysis and commentary that provides a clear view of each issue. This is not your simple “In November 2012, a PCGS example in MS67DMPL sold for…” narrative. Instead, Goe offers a clear-eyed view of great coins, great collectors, details the various nuances of each issue, and explains why the certified coin landscape is forever changing. The author goes into great detail explaining why some coins sell for more and how ebbs and flows in the market in recent years have impacted each issue.

This is a top-level analysis provided by a talented practitioner of the craft and the architect of the historically significant Battle Born Collection.

The first volume discusses the events leading up to the Mint’s establishment, from the purchase of the land and the laying of the cornerstone to the striking of the first coins in 1870 and on through 1874. Here you will learn about how coins were made, how certain coins became great coins, and how those great coins were sold over the course of 130+ years of numismatic history. Volume 2 deals with the Mint at the height of its glory and through its many rough spells and covers the time of James Crawford’s tenure as Mint Superintendent. Crawford served from September 1874 to March 8, 1885, when he died in office. The third volume covers the resumption of coinage from 1889 through 1893 when Carson City struck its final piece.

A minor quibble concerns Goe’s lack of focus on the Mint during its inactive period of 1886-1888 and its status as a United States Assay Office, which lasted until 1933. As there were no coins to collect from these two periods, it is understandable that these topics fell outside of the purview of this project. 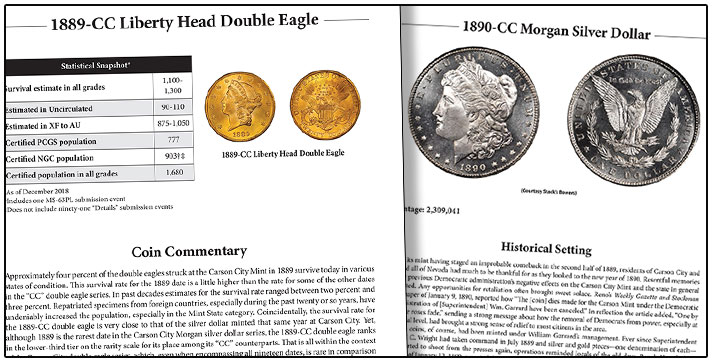 Beyond the grand narrative, collectors will appreciate the work put into the various appendices found in these three volumes.

In volume 2, Appendix II deals with the controversial issue of Proof coinage at the Carson City Mint. Goe cites the often contradictory guidelines that have been employed over the years to confer Proof status upon various exceptional CC-mint specimens. Clearly, this is an area for the advanced specialist and Goe’s commentary should prove especially insightful for those wishing to explore this area of the field.

In volume 3, Appendix II describes the finest-known specimens of all 111 “CC” date-denominations per Goe’s decades’-long analysis. Among those so enumerated are many from the Battle Born Collection, as well as a number of other important and prestigious coin cabinets from the 20th century. Collectors Bob Simpson, Eugene Gardner, and Dell Loy Hansen are but a few of the more recent owners to have dabbled in the top end of Carson City coinage.

Even more interesting, and proving how unpredictable numismatics can be, Goe accounts for recently discovered examples, such as the only known Mint State 1879-CC eagle–discovered in Alaska circa 2005–and the beautiful 1890-CC double eagle that was among hundreds of gold coins hidden in plain sight on a California property that became known as the Saddle Ridge Hoard when it was marketed by Kagin’s starting in 2013.

Also in Goe’s list are coins whose whereabouts are currently unknown, like the finest known 1870-CC double eagle (NGC AU58) that was reported as stolen in October 2011 and has never been seen since. Goe’s work here will prove essential for specialists, researchers, and cataloguers.

Further appendices show Goe’s penchant for thinking around the issue. Appendix III provides a cost estimate (based on 2018 pricing) of every one of the finest known coins in the 111-piece set. Here, our missing 1870-CC $20 has an estimated price of $1 million, making the finest known 1875-CC dime seem like a cheapie at just $10,000. In the 2018 coin market, Goe posits that it would cost north of $22 million to complete the set of finest knowns; yet given the white-hot coin market of 2021, this number seems a touch low. More than the cost involved, the time it would take to assemble this collection runs into the decades… if it’s even possible. Given that reality, that $22 million number will likely balloon in the years to come.

Goe also tracks the price development of Carson City coinage through various iterations of the Red Book from 1947 to 2018. Students of Red Book pricing already know the myriad complexities added to the market with the introduction of numerical grading and the later introduction of slabbing. Still, some will find the price progression interesting and long for the days when a $400,000 rarity could have been purchased years ago for less than a thousand.

A final appendix of note has tables of the surviving populations of all Carson City coins. Information like this, albeit speculative, is more important to collectors than a coin’s published mintage as it represents the maximum number of pieces of each issue circulating in the numismatic market. Goe further breaks down these numbers by creating tables that list the scarcer issues in the series. For those that like to write in their books, Goe also offers a checklist for the 111 coin set as well as for the ten-piece Carson City Coin Type Set.

I mention these “afterthoughts” in Goe’s work because what constitutes an appendix in The Confident Carson City Coin Collector would be the main course in virtually any other numismatic book. The Confident Carson City Coin Collector will be a standard reference for years to come. It is impossible to think of a more thorough or collector-focused concept to present actual history, numismatic history, and market data than the approach Goe takes here.

For all of these reasons and more, CoinWeek gives The Confident Carson City Coin Collector our highest recommendation.

And given that Goe has no plans to re-release The Confident Carson City Coin Collector after it sells out (less than half the print run remains unsold), it’s not unlikely that those who do not order their copy now will have to pay hundreds more to obtain one on the secondary market.

Wait at your own financial risk.

All three volumes are sold as a bundle. MSRP $299.