The 1856 Flying Eagle cent is an important and highly collectible issue because of its status as the first small cent. Large cents, which had been struck since 1793, were both cumbersome and costly to produce. The United States Mint experimented with a reduced-sized one cent piece that could solve both problems, and the result was a coin that was 8.5 millimeters smaller in diameter and more than six grams lighter.

All 1856 cents are considered to be patterns and between 2,000 and 3,000 pieces are believed to have been struck. NGC designates all 1856 Flying Eagle cents to be Proofs, but it is common to see low-grade examples because many ultimately entered circulation. 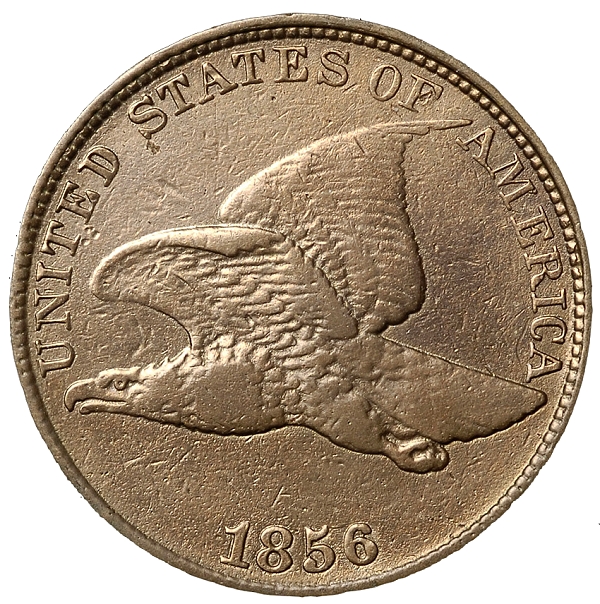 It is not surprising that counterfeiters have targeted the 1856 Flying Eagle. According to the NGC US Coin Price Guide, in Proof 4, an example would be worth $6,000. Better grade specimens can easily sell for five figures. Although outright fakes–such as casts or die-struck copies of the 1856 cent–are uncommon, NGC routinely receives altered dates.

These alterations are fairly easy to spot. All of the 1856 cents have the AM in AMERICA closely spaced, while only half of the 1858 cents have this “Large Letters” design. If the AM are separated on an 1856, it was undoubtedly altered from an 1858 Small Letters cent. The style of the 5 in the date was different in 1856 and 1858 as well, another key diagnostic. In 1856, the 5 had a long top bar that tapered to a sharp point, while in 1858 the top bar was shorter and had a rounded tip.

The 1856 Flying Eagle cent pictured here was altered from an 1858 Large Letters cent. The AM in AMERICA are touching, as they should be on the 1856, but the 5 is clearly the wrong style. Most importantly, there are prominent tool marks around the 6, a telltale sign that the digit was altered. This is not a particularly deceptive fake, but it’s an alteration that we see quite frequently.