This 1895 Morgan dollar forgery is a simple case of just too much silver and not enough effort on the details.

The 1895 Morgan dollar is well known as one of the series’ premier rarities. While some 12,000 Mint State examples were reportedly struck by the Philadelphia Mint that year, none of those business strike examples have ever surfaced. It is likely that all were melted before even leaving the mint.

That leaves only the 880 Proofs to satisfy demand for a Philadelphia-issued 1895 Morgan silver dollar, making it the most sought-after coin in the series.

NGC recently received what appears to be a business strike 1895 Morgan dollar in a collector submission. Unfortunately for the collector, the coin was counterfeit. At first glance, the coin has an odd yellowish tint. In fact, the graders were unsure if the coin was even silver. Surprisingly, it was actually 95% silver, 5% more than a genuine example! As it turns out, the odd color is likely due to the forger attempting to disguise the true nature of the coin with artificial coloring to make it appear more than a century old.

The next thing that really stands out is the date. It is poorly formed, especially the 5.

As you can see from the photos above, the entire date on the fake is poorly executed. Whereas the digits are sharp and defined on the genuine piece, they are rounded and blob-like on the fake. This is especially noticeable on the 5, which seems to have been engraved by hand, as it does not have straight edges.

The United States Mint, even in the late 19th century, would not have produced a product with details as poor as those seen in the close-up photo above. The surfaces are grainy, especially in the deepest parts of the design. Compare those to the smooth surfaces of the genuine 1895 Proof, and you’ll see just how different they are.

At NGC, we are lucky to have graded genuine 1895 Proof Morgan dollars over 350 times. The NGC graders know exactly what a genuine example should look like. 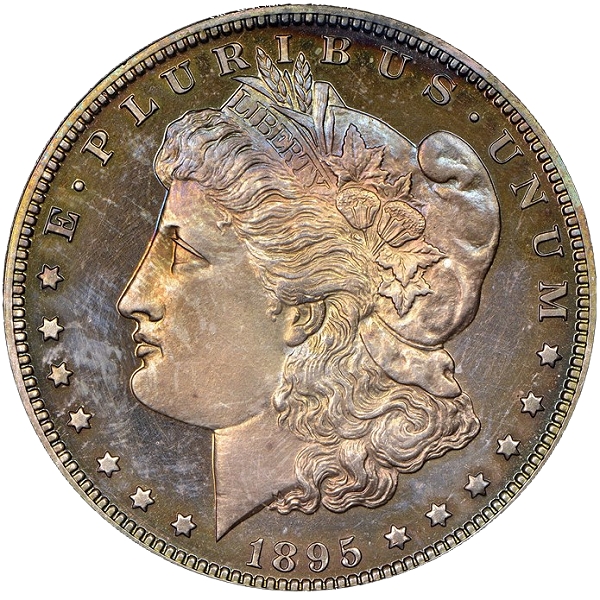 On the other hand, many collectors have probably not even seen one in person. This leaves a lot of room for counterfeiters to enter the marketplace and sell to unsuspecting buyers who think they are getting the deal of a lifetime.