Just a note, I consider this type of counterfeit an intermediate level of deceptive “type”, better than the lower level fakes that I refer to as “Chinese Cartoon” types on up to the multiple lower-level “Ali” offerings.

These struck fakes are documented in several different denominations and varieties and are fairly accurate as compared to the source coins, but the counterfeiters use the same layout and change the date to create a series of fakes, resulting in impossible die combinations and states. These take a higher level of knowledge to discern, and being savvy about the series and its variety attributions is part of the best defense.

As a point of reference on a time frame for these, I found a note in the November 2010 issue of Early American Coppers’ (EAC) club journal Penny-Wise from the EAC internet newsletter R8 that discussed the use of the 1833 N-5 as the “host coin” for the latest counterfeits at the time:

“The original from which these transfer dies (without date) were made is an 1833 N5. Beginning 2008 or before, the Chinese have been exporting better-and-better counterfeits of US coins of all types. So far the Chinese large cents I have seen have been rather unsophisticated, but I expect their newer products to become more and more deceptive. On their current Matron Head products, the date is hand-cut and does not “look right.” The host coin used to produce these dies is an XF 33-5 (small-letter reverse). I have seen these in grades from F through red “MS,” and as every date from 1815 through 1839, always with the old pre-1836 broad-bust head style. Another fake-family has a low-relief head and large-letter reverse. Some are stamped “COPY” or “REPLICA” but many are **NOT** so marked. The Chinese are making EVERY date of US large cent from 1793 through 1857 — often with the wrong head-style or letter-size.”

So, there appears to be a continuation of “improvement” and sophistication in the efforts to infuse our hobby with better and better fakes, requiring more knowledge and diligence on our part…

I co-authored an article for EAC a couple of years ago about a suspicious 1816 large cent for sale on the internet. The following is the image that centered that discussion.

My collaborator then ran through all of the known varieties for 1816 large cents to prove it didn’t match any of them! This prompted additional discussion among EAC members, with another adding the following:

“[O]nce again, 1833 Newcomb 5, except for the date. Deja vu all over again. this one even shows the rim ding above the D from the mother coin.

“The mother coin was an 1833N5 with a rim ding over the D of UNITED. These are easy to spot once you know what was copied to make the dies. Most of these middle date counterfeits match the attribution points of the 33/5 including the die cracks of a MDS example. The most dangerous of the group is the 1833, it passes the die attribution test for N5 including the “horned 8″ but the rim and edge is still wrong.”

A note about the mother/source example from fellow EAC’er and researcher Randy Snyder is that the “fake 1833 N5 is/was issued without any alteration or re-engraving of the date numerals,” making it a more deceptive fake than the other family members.

And as these discussions typically progress, another member shared his example! 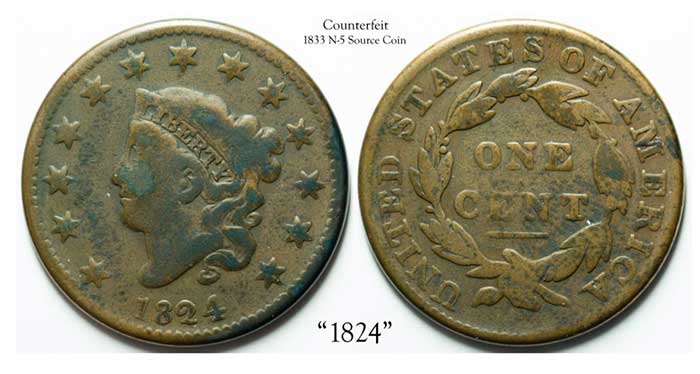 This “1824” was worked on in an effort to make it appear genuine and is the most “worn” example we have seen; the “1816” was weathered in the same effort to deceive.

Note the star positions and dentils – all match the genuine 1833 N-5 except, of course, the date. So, like the 1804 C-6 half cent counterfeits, an entire “family” is created by changing the date and striking another in the series.

And of course, there are a few examples that have passed through the “Dark Side” and the following show the diversity of the counterfeiter’s efforts. Nothing is sacred, as the counterfeiters tried to up their game with this example. This example was nearly sold for major money at a recent coin show; it was prevented by an EAC dealer who recognized it as a fake. Again, it doesn’t match an actual 1826 variety but it does match the 1833 N-5 except, of course, for the date.

And on to the part of the research that I really enjoy: finding the actual SOURCE example! Armed with decent images of the fakes and a time frame based on previous EAC correspondence, I was able to find a match in a 2007 auction. The coin was in an ANACS holder at the point of sale. 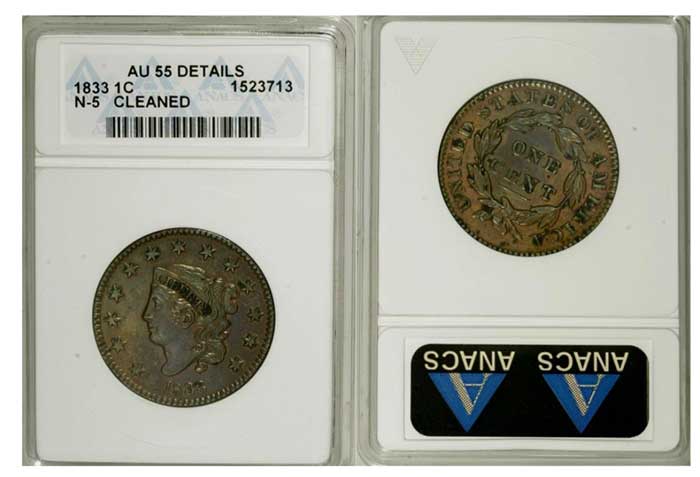 I have noted in the research articles of the latest deceptive struck counterfeits that the farthest back we have traced them is 2008, while this one dates back to 2007–maybe the actual start to all of this?

As I have previously stated, here and in other articles, one of the best ways to protect yourself from this type of fake for sale is to learn the series yourself. Buy the reference books. Join a discussion group or club focused on your interests (such as Early American Coppers/EAC). Ask other experienced members and friends. And review similar items on the internet – major auction house sales archives and NGC and PCGS’s variety pages are great online resources.

And a recent source of quick information on these and other struck counterfeits can be viewed on CoinWeek, where the entire series of research articles can be accessed!

PS – As always, the research and summary articles continue to be a collaborative effort with many EAC members and Facebook “Dark Side” friends participating and contributing!