A Weekly CoinWeek Column by Greg Reynolds
News and Analysis regarding scarce coins, coin markets, and the coin collecting community #170 …..

The purpose here is to put forth options, mention some pertinent facts related to coin prices, and provide advice, for people who would like to obtain classic U.S. coins and do not wish to pay more than $500 for any one coin. Those who will not spend an amount near $500 may prefer my earlier series on classic U.S. coins that cost less than $250 each, or my piece for absolute beginners. (Clickable links are in blue.)

“You do not have to be in the top two percent of the earners to buy great coins with a lot of potential,” John Albanese declares. “Circulated, classic U.S. coins are often good deals.” “Indian Head pennies have always been extremely popular,” John Albanese notes. Given a $500 per coin limit, “collectors should buy choice, circulated Indian Cents,” John advises, “mostly Very Fine (VF) to Extremely Fine (XF) grades, [with] some of the better dates in Very Good to Fine grades.” Furthermore, Albanese suggests selecting Indian Cents of a “chocolate brown color. Avoid pennies with rim nicks, edge bumps, or green corrosion spots,” John adds. Albanese is the founder of the CAC and of the NCA, which helps people who have been harmed by sellers of coins.

“Copper-Nickel” Indian Cents (1859-64) consist of an alloy of about 12% nickel and 88% copper. (In this discussion, coins that are at least 88% copper are referred to as ‘copper coins.’) Even a nickel content of just 12%, though, results in these coins appearing a little white. Flying Eagle Cents are of this same ‘Copper-Nickel’ composition. Large cents and half cents were minted from 1793 to 1857, though not in every year along the way. These are more than 99% copper and do not ever appear somewhat white, at least not naturally.

All six of the Copper-Nickel Cents of the Indian design in Extremely Fine-40 or -45 grades could be acquired for less than $500 each. A very much matched set of those would be a very practical objective. Indian Cents in Good-04 to Fine-15 grades, however, are easier to locate than those in Extremely Fine (XF-40 and -45) grades. (Extremely Fine is frequently, though illogically, termed “Extra Fine” and the “XF” abbreviation is very widely used.)

Over the last three years, Heritage has auctioned 1877 Indians in “PCGS Genuine” holders for less than $500 each on six separate occasions. Even so, it is true that other 1877 Indian Cents in “PCGS Genuine” holders have been auctioned for far more than $500 each. Some of the non-gradable pieces that are available for less than $500 each are decent enough. For example, an 1877 penny that was once bent and is appealing in most other ways could sit alongside carefully selected circulated Indian Cents in the same set. 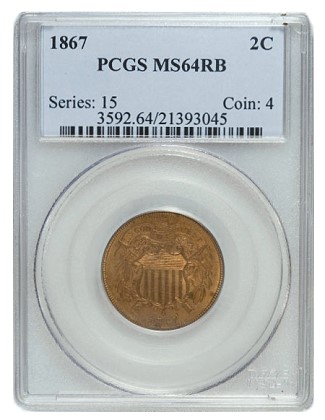 For details about this series, please click to read my article on Collecting Two Cent Pieces. For under $500 per coin, a complete set of business strike Two Cent Pieces could easily be completed.

“My favorite series, relating to coins in the $200 to $500 price range, is Two Cent Pieces,” Matt Kleinsteuber states boldly. Those that are PCGS or NGC certified from “63-Brown to 65-Red & Brown are phenomenally good values,” Matt emphasizes. Kleinsteuber is the lead grader and trader with NFC coins.

I note that 1865, 1866 and 1867 Two Cent Pieces that are PCGS or NGC certified as ‘MS-64-Red & Brown’ should be obtainable for less than $500 each. I suggest discussing the concept of original ‘Mint Red’ and specific, ‘Red-Brown’ designated coins with experts. In my view, choice uncirculated, very much original (“MS-63” and higher grade) Two Cent Pieces are really neat.

Large cents were minted from 1793 to 1857, and are usually a little larger than quarters minted after 1830. There are so many large cents available for less than $500 each that it would not be sensible to list a substantial portion of them here. Early large cents tend to be more expensive than later dates. A PCGS or NGC graded Good-04, 1794 or 1795, Liberty Cap Cent could be obtained for less than $500. Certainly, a substantial number of AG-03 grade Liberty Cap Cents are available for prices below $500 each. AU grade Liberty Cap Large Cents, though, are a whole different matter.

Regarding Classic Head Cents (1808-14), all the dates are available in VG-08 or higher grades for prices below $500 each. This is a neat set to complete.

Besides, if an excellent collection could be assembled an instant, then most collectors would not find it to be fun or rewarding. Coin collecting is a process.

For the collector ‘in a hurry,’a set of business strike, Braided Hair Large Cents (1839-57) could be finished in a rapid manner. Regarding series of classic U.S. coins, it is among the easiest to complete. There are no rarities. Attractive, relatively original coins are available and it may take time to carefully select, especially appealing coins.

Like large cents, half cents were minted from 1793 to 1857. Half cents, though, were not minted as often or to the same extent as large cents. They were not very popular in their own time, though collectors are fascinated with them in the present. If truly gradable, 1795 half cents in Good-04 grade could be found for less than $500 each, then these would be tremendous values. These are very scarce coins overall. Even an AG-03 grade 1795 half cent for less than $400 could be an excellent acquisition, from historical and logical perspectives.

Each collector may have to wait months, or even years, for some of these in grades of his or her choice. Assembling a type set of half cents would take less time.

The 1831 and the 1836 are usually considered to be Proof-only dates, though some 1831 half cents are very controversial as to their respective method of manufacture. Other than the 1828 with twelve stars on the front (obverse), all the generally accepted, business strikes from 1825 to 1835 have current market values below $500 in AU-55 or AU-58 grades.

An 1828 half cent, with twelve stars on the obverse, in AU-55 grade probably retails for around $500. Surely, an AU-50 grade representative of this issue would be likely to sell for less than $500.

I note that a set of business strike, Braided Hair Half Cents, all PCGS or NGC certified as grading from MS-61 to MS-63, could probably be assembled for less than $500 per coin. In many cases, though, coins that grade AU-55 are more appealing than corresponding coins of the same date and type that are certified as grading MS-60, MS-61 or MS-62.

In sum, collectors who are determined not to spend more than $500 for any one coin can easily build collections and greatly enjoy collecting U.S. copper coins. There are many coins and collecting options from which to choose. Some ‘date sets’ and limited type sets can be completed. Collectors should be careful, however, in regard to the coins selected.

Although the purchase of PCGS or NGC certified coins involves much less risk than relevant purchases of non-certified coins, it is not a good idea to take certified grades too seriously. Collectors should ask questions of experts, find advisors, study images of coins AND examine coins in actuality. It helps to learn at least a little about the types of coins that are being purchased. Importantly, coin collecting should be fun. Jeff Garrett: The Art of Submitting Rare Coins for Grading