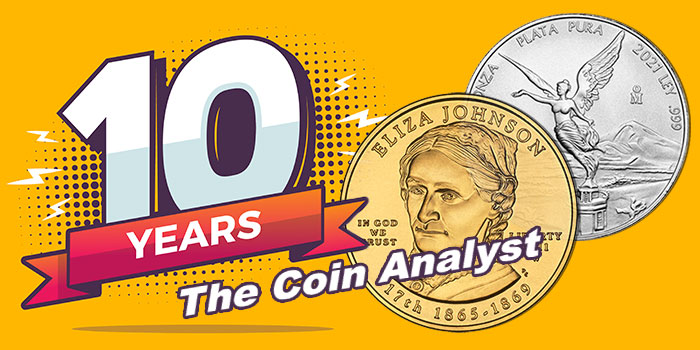 After a decade and about 300 of these columns, it is time to take stock of what I have tried to do with this platform that has enabled me to continue growing as a numismatic writer and develop a wide range of contacts within the field.

Let me begin by taking the opportunity to thank each of you who has generously shared your insights with me and my readers. And let me thank my readers not just for reading the column but for your comments, feedback, and suggestions, which are all appreciated.

In May 2011, the publisher of CoinWeek, Scott Purvis, asked me to do a two-part article on collecting Morgan dollars after seeing some articles I wrote for other publications. He then asked if I wanted to start writing a regular weekly column. If you would like to see the first one, this is it.

Scott wanted to expand the former CoinLink site that consisted of links to numerous articles on coins into CoinWeek – a free online daily coin magazine — with original contributions from a number of writers such as Al Doyle, Charles Morgan, Hubert Walker, Mike Markowitz, and myself. The site has continued to grow extensively under the helm of editors Morgan and Walker, especially with the addition of videos and podcasts, and is today the most visited coin news website with over a million unique visitors per month. Because of my background as a former policy analyst for the federal government and news analyst and op-ed writer for newspapers, I dubbed the new column The Coin Analyst, which has been focused on helping collectors get the most out of their hobby by informing them with in-depth discussion of important trends and developments in numismatics and in the coin market.

It was something that I felt was missing in the existing coverage of coins in the U.S., which typically consists of news articles, especially on new releases, that tend to draw heavily on information from mints and their officials and original numismatic research as perhaps best exemplified by feature articles in The Numismatist, where I have had a monthly column since July 2015 on modern world coins. Something in between those two was needed, and I have tried to help fill that gap.

The new column was unusual for several reasons.

First, it was a column that often looked like a feature article because of the lengthy, more detailed discussion than appears in most coin columns.

Second, because it covered U.S. and world coins and included reporting, analysis, and fact-based commentary when appropriate – a mixture not typically found in a numismatic column.

Over time, the coverage grew to include virtually all things numismatic from classic and modern American coins, including circulating, bullion, and commemorative issues, to modern world coins of all types, medals, the precious metals markets, different aspects of the coin market, and more. But overall, modern coins have been my primary beat, and that is because I felt they were not getting the serious attention they deserve.

I have had the good fortune to do many interviews with and profiles of key figures in the hobby such as United States Mint Chief Engraver Joe Menna, Jim Halperin of Heritage Auctions, current U.S. Mint Director David J. Ryder, numismatic writer Eric Jordan, Laura Sperber of Legend Numismatics, and many others.

I have summarized entire series like the 50 State Quarter Program, the Austrian Mint’s 25-euro silver-niobium coins, bi-metal euro coinage and others, or subsets like the W-mint marked Washington quarters.

Modern U.S. coin series have been the most frequent topic, from commemoratives to Silver and Gold Eagles and many others.

My goal was to look beyond the headlines about what was being released and look for broader trends and lessons in how those releases were handled by the U.S. Mint and which ones were more significant for collectors in some cases as potential sleepers. Whereas many others pooh-poohed the $10 First Spouse gold series and the 5-ounce Silver ATB coins, I saw potential in both. But with time it became apparent that lack of demand for the spouse coins was hurting the market for them. I continue to believe the first ladies were deserving of a coin series. But half-ounce gold coins were not the right vehicle for that because they were too great a financial commitment even for many of those who liked the coins.

The ATB series has also involved a substantial financial commitment, but individual coins were accessible for most collectors except when the 2010 coins were first sold by dealers at vastly inflated premiums until the Mint stepped in. And the bullion issues in particular – thanks to fluctuating silver prices, which served to dollar cost average one’s purchases over time, low mintages, and some great designs that tap into the fascination most collectors have with American history – have been a good buy.

The mint-marked, vapor-blasted versions with their matte surfaces are gorgeous, but the Mint’s pricing has hurt sales of those coins in recent years, and many remain underwater on some earlier issues that came out when silver spot was over $30 an ounce.

Then there were pieces with practical advice on selling coins, working with dealers, the pros and cons of classic vs. modern coins, and strategies for collecting and investing. I have also written an annual feature for the past five years that zeroes in on some of that year’s best-performing modern issues. In many cases, collectors who read those articles and purchased the coins at the right time have done well.

There have also been book review essays, especially on important numismatic reference works like Q. David Bowers’ Red Books on every U.S. coin series written by himself and other authors and other works like Morgan and Walker’s 100 Greatest Modern World Coins and others.

The pros and cons of graded coins, especially modern U.S. issues, has been a recurring theme, as have the gold standard and gold’s role in numismatics, the role of silver in the coin market and the role of the economy in shaping the hobby and market.

And the key importance of getting the art right on coins is something of great interest to me, which is why I have covered Citizens Coinage Advisory Committee (CCAC) meetings and interviewed many current and past members and coin designers like Chris Costello, Joel Iskowitz, Chiara Principe, and others.

Among a wide range of modern world coins I have covered, the Mexican Libertad series has stood out mainly because that is the series I believe has the best long-term potential among the major silver and gold bullion series being issued today.

Ongoing innovations in modern coins has been another key theme, and I was the first writer to focus on why the cup or dome-shaped design was gaining popularity in the 2010s.

I have also discussed proposals for new U.S. coin series, such as the idea of a circulating series of Liberty-themed coins that was promoted by some members of the CCAC under the chairmanship of Gary Marks that never got off the ground and more recently the 2021 Morgan and Peace dollar coins championed by Thomas Uram and Michael Moran, both current CCAC members, which will debut on May 24.

Unlike many in the hobby who seem depressed about the state of numismatics in the United States due to a combination of what they see as frequent screw-ups by the U.S. Mint and the greying of the hobby, I remain more optimistic.

Many of us old-timers tend to be insufficiently aware of the enthusiasm for the hobby among younger generations, who spend less time going to coin shows (remember those?) and buying coins that cost thousands of dollars, and more time with social media coin sites and purchasing more affordable coins or even collecting from change.

When it comes to modern world issues, it is certainly true that world and private mints should seriously consider being more strategic with what they release and work to help support the secondary market for their coins. I’d rather see more good series continue than have ones that start and suddenly disappear or see countless new series with animals.

At the same time, thanks to the ongoing revolution in minting technology pioneered especially by CIT and other companies and mints, collectors today can choose from a remarkable range of amazing coins being issued on almost any topic imaginable. And this has increased the ranks of collectors like myself who enjoy collecting by topic and not just by series. As for my favorite topic, the art of coins, there have been improvements with U.S. Mint designs, but it has been uneven and continues overall to pale in comparison to what many world and private mints are doing artistically. There are some amazing American coin designers like Joel Iskowitz, John Mercanti, and Donald Everhart, and it is not surprising that foreign coin makers have been hiring them to design their coins.

The Mint clearly needs to do a lot more to improve its website so it can better handle high-demand releases, and the Mint would do well to reevaluate how it does many other things too to better meet the interests of collectors.

But the key factor that is causing the Mint not to make enough of the kind of coins collectors want is the U.S. Congress, which continues to pass legislation calling for coin programs, especially in the commemorative area, that often has an overly narrow focus driven largely by the quest for surcharges. As I and others have argued many times, we need coins on topics of broad national importance like the successful Apollo 11 50th anniversary coins – an issue which is analyzed at length in a report of the Congressional Research Service, which prepares its reports specifically for members of congress.

As for the numismatic media, the landscape has changed a lot in the past decade with more news sites, more blogs and social media groups devoted to coins and more dealers who hire people like myself to prepare informative articles for their retail sites. In this environment, the Coin Analyst needs to keep adapting and doing his best to keep you informed.

As we all look towards the future of a dynamic and changing hobby and market here and abroad, I will continue to write about what I think matters most to collectors. If there are specific topics you would like to see covered, please let me know in the comments.