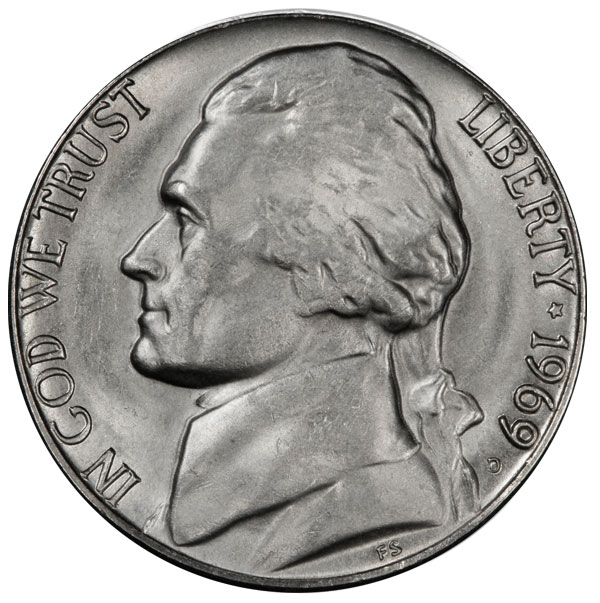 202,807,500 Jefferson nickels were struck at the Denver Mint in 1969; quite a sum, but a far cry from the 2.8 billion nickels struck at the Philadelphia and Denver mints just five years earlier. In 1969, the United States Mint allocated all of its nickel production to its Denver and San Francisco facilities. No nickels were struck in Philadelphia in 1969 or in 1970. With a mintage this high, the 1969-D nickel is a common coin that can be readily found in circulation. Nearly 50 years old, most coins encountered in the wild will be well circulated, although it is possible to find examples that survive in About Uncirculated grades.

What is the 1969-D Jefferson nickel worth? This is an easily answered question but it requires a bit of texture and context.

In circulated grades, the 1969-D nickel is worth its face value of five cents. In uncirculated condition, however, the 1969-D takes on a different character. Consider that a 1969 United States Mint Set sells for about $9.00 and includes one of each coin struck by the Mint, including a 40% silver Kennedy half dollar. In this set, one would likely give each nickel a “value” of about $1. Recent eBay sales figures correspond with this estimate. This is a premium of 20 times the face value.

Once certified by a major grading service, the numismatic premium of the 1969-D escalates depending on grade and strike. The Mint State grading scale is made for grades 60 to 70. A coin in MS60 is technically Uncirculated, but heavily abused and practically undesirable in any instance where higher-quality examples are available. In MS63, the coin is described as being in Choice Uncirculated condition. In this grade, the coin may have subdued luster and a number of dings, hits, or marks that come about from coin-on-coin contact.

At two grades higher, a coin is considered Gem Uncirculated. The presence of dings and hits will be considerably less. At this grade, the coin will have full luster and generally appear attractive. From MS65 to MS69, the degree of hits and dings diminishes drastically until none are perceptible to the naked eye.

MS70 is considered perfect. For the 1969-D Jefferson nickel, MS70 is a theoretical grade. No business strike nickel of this period was ever struck with the amount of care necessary for a coin to qualify for this grade. In fact, PCGS has not graded a single 1969-D Jefferson nickel above MS66, and NGC has certified only 16 examples in their top population grade for this issue, MS67.

Given the cost of coin certification, only Gem-quality coins can be profitably certified.

In August 2016, these prices were completely blown away by the $30,550 realized at Stack’s Bowers’ ANA World’s Fair of Money Rarities Night Auction for a 1969-D Jefferson nickel graded MS65 FS by PCGS.

This incredible amount was achieved for two reasons. The first is that for years, specialized Jefferson nickel collectors have been pursuing fully-struck examples. Due to the nature of the metal, the speed at which nickels are struck for circulation, and the age of the master hubs, very few examples of this era are well struck. The typical example struck this year shows these details in an amorphous blob. The record-setting nickel sold by Stack’s Bowers is, to date, the only Full Steps (FS) nickel ever certified for this issue.

A left-facing bust of President Thomas Jefferson, including a colonial-era pigtail and strikingly similar in detail to the profile of Jean-Antoine Houdon’s 1789 bust, takes up the majority of the obverse. The top of his head almost touches the rim, and the barest of truncations is visible at the bottom where Jefferson’s left shoulder meets the edge of the coin. The national motto IN GOD WE TRUST arcs clockwise along most of the length of the left side of the coin, starting from Jefferson’s chest and extending to his hairline. The inscriptions LIBERTY and the date 1969 run clockwise along the right side behind Jefferson. A small five-pointed star divides the two inscriptions A small mint mark “D” is found beneath the date. Felix Schlag’s initials “FS” appear below the bust truncation (this feature was added in 1966). The edge of the 1969-D Jefferson nickel is plain or smooth.