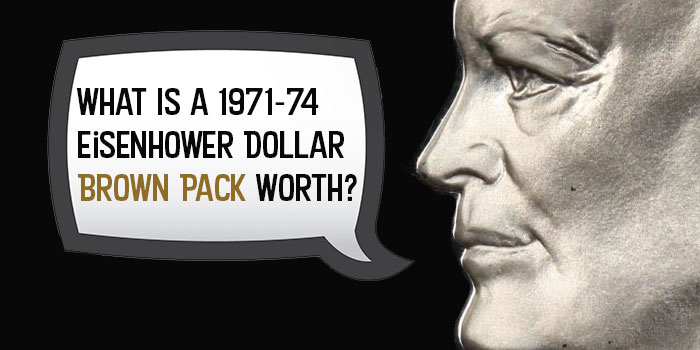 As the last dollar coin issued by the United States that contained at least some silver, the Eisenhower dollar straddles the line between the “classic” and “modern” eras of American coinage. Not too long ago–much like Kennedy half dollars and Bicentennial quarters–one might find an occassional “Ike” dollar in change. But as intriguing as those coins were, Eisenhower dollars were something else.

Several aspects immediately stood out. Its size. Its heft. The balding pate of President Eisenhower.

And how many coins had outer space on the reverse?

If you were kids like we were, then you dutifully squirreled away every Eisenhower dollar you happened to come across. Of course this means that our early collections were limited to circulated business strike specimens that would probably never be worth much more than the pride and joy of ownership.

But for a select few, the Eisenhower dollar ignited a true passion, inspiring an obsessive pursuit of the best specimens and a lifetime of scholarship. Even when many in the hobby thought that Ike dollars were “ugly” and not worth the effort, these are the collectors who searched rolls from the bank and bought Proofs from the Mint.

Ignoring the rare Ike varieties their persistence has uncovered over the decades, it is significant that these Proofs, produced in San Francisco between 1971 and 1974, consisted of 40% silver. This by itself was almost a guarantee of value, as our nation had only recently switched from precious metal (silver; gold production stopped in 1933) to base metal in a copper-nickel “clad” composition, and people were voraciously removing silver from circulation.

So as representatives of the kinds of Eisenhower dollars that one could obtain relatively easily when they were released and at the same time expect some kind of return on investment, how much are 1971-74 Proof Ikes worth in today’s market? Let’s find out.

The Coinage Act of 1965 legislated the switch from silver to a primarily clad-based coinage, removing silver from the dime and quarter, and reducing the silver content of the half dollar from 90% to 40%. It also embargoed the production of silver dollars for five years. This proviso was enacted because of a recent blunder concerning the revival of silver dollar coinage (the enigmatic 1964-D Peace dollar) at the behest of Western casinos.

Nevertheless, Mint Director Mary Brooks was determined to continue the minting of the dollar in silver, so as 1970 approached she began to lobby for its renewed production. Congress was hesitant.

However, the death of former president and general Dwight D. Eisenhower in March of 1969 and the Apollo 11 moon landing in July encouraged Congress to take another look. A clad dollar coin commemorating Eisenhower was proposed and had traction, but Representative H. R. Gross (R-IA3) famously opposed the commemoration of Ike on base metal. On October 14, Eisenhower’s birthday, the House passed the clad bill anyway.

The Senate, on the other hand, passed an amended version, one which authorized the production of 40% silver Eisenhower dollars. Advocates like Senator Jim McClure (R-ID) were instrumental in getting a collector’s version of the dollar produced in silver, but it definitely helped that former first lady Mamie Einsehower herself wrote a letter to the Senate requesting that her late husband be honored on the precious metal.

Then, towards the end of the month, Representative Robert Casey (D-TX22) introduced a bill to commemorate the momentous moon landing. The two would eventually be combined.

A new version of the bill to strike silver dollars was produced in March of 1970. This time, a circulating dollar would be made in clad and a numismatic issue would be made in 40% silver. But even after participating in this compromise, the House ultimately rejected the package. It wasn’t until the mandate was attached to the Bank Holding Company Act Amendments of 1970 that the Eisenhower dollar was authorized.

Frank Gasparro, Chief Engraver of the U.S. Mint, began work on the coin’s design in November 1970. The obverse was meant to look like that of the Washington quarter; the reverse was originally based on the Apollo 11 mission patch created by astronaut Michael Collins.

The Proof and Uncirculated strikes manufactured by San Francisco between 1971 and 1974 came in special packaging. Uncirculated Ikes were sold in blue envelopes and are called “Blue Packs”. Proofs were sold in plastic cases (much like GSA cases) and packaged in a woodgrain printed cardboard box with a flocked inner case. These are called “Brown Packs”.

The following are total mintages for Brown Pack Proof coins according to A Guide Book of United States Coins (the “Red Book“):

Proof Ikes in original government packaging are more affordable now than they were at the time of release, and while many collectors are satisfied with an example of each issue in its original government packaging, a significant number of collectors prefer to obtain certified examples, where the coin carries a slight market premium in the grade Proof 69 and a more substantial premium in Proof 70.

Virtually all Brown Pack Proof Ikes will earn the Deep Cameo designation, but beware that the quality of this cameo frost varies from piece to piece and from year to year.

If you have particularly nice examples in original government packaging and find yourself interested in submitting your coins for grading to PCGS or NGC, note that submission to either service will incur a $16 fee.

As for shipping, submitting to NGC means a flat $8 handling fee per submission, so the total cost of slabbing your Ike in an NGC holder is $24. PCGS shipping and handling fees are $23.05 for one to four coins and $28.30 for five to 25. Dividing each of these figures by five gives us a charge of either $4.61 or $5.66 per coin.

Unless your submission is part of a larger consignment (at least 26 coins), in which case only $0.26 must be added to the $16 fee per coin when going with PCGS.

In original government packaging, a 1971-S Proof Eisenhower dollar brings a slight premium over the coin’s melt value. As a 40% silver-clad coin, the melt value of an Eisenhower dollar is significantly lower than that of a Morgan or Peace dollar. The typical range of prices that one will see a 1971-S sell for on eBay is between $8 and $17, depending on the professionalism of the listing. 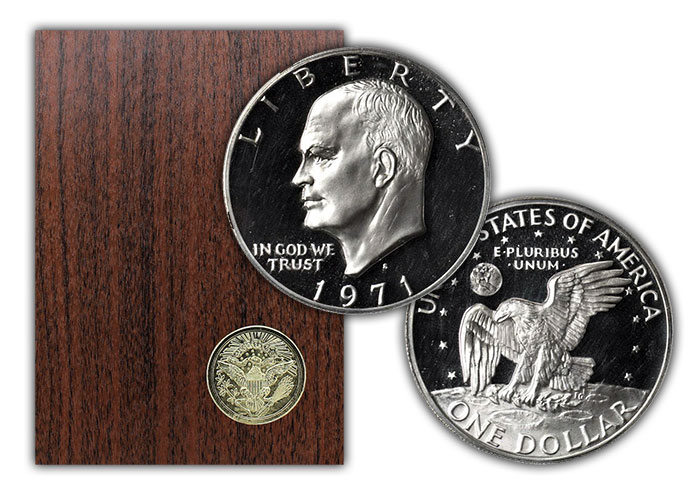 For 1971-S Proofs in certified holders, the typical grade at both PCGS and NGC appears to be 69 with Deep Cameo or Ultra Cameo, depending on the service’s preferred nomenclature. In non-desirable grades, a 1971-S Proof in a certified holder typically brings less than $20.

A quick perusal of eBay auction results indicates that a PCGS Proof 67 DCAM goes for about $12; presumably Cameos and non-Cameos sell for less, though none were sold in the last few months. A single NGC PF-67 UCAM sold in May for almost $13.

PCGS-graded Proof 69 Deep Cameos are selling for about $21. Prices for NGC Ultra Cameo 69s are all over the place, but the lowest price of $22.50 seems more accurate.

PCGS has certified 175 examples of the 1971-S Eisenhower dollar in the Proof 70 grade. One of these examples will cost you about $700. To date, NGC has certified no coins in this top grade.

In OGP, the 1972-S sells for the same price as the 1971-S. In certified grades, the population reports from NGC and PCGS also support the same pattern we see with the 1971-S, with thousands of seemingly perfect examples having been submitted to both of the major grading services only to receive the 69 grade, typically in Deep or Ultra Cameo.

There also happen to be 288 recorded PR-70 DCAMS in PCGS holders (none certified to date by NGC).

Auction results for PCGS PR-69 Deep Cameos hover around $21 on eBay but once in a while go for twice as much. NGC Ultra Cameos are currently selling for around $30 or even $40.

This price discrepancy is one of the curious idiosyncrasies of the rare coin market, having to do with the scarcity of available product (fewer Eisenhower dollar Proofs in NGC holders) than with the market putting its trust in one brand over the other.

The 1973-S is an interesting issue as its mintage, the lowest of the brown packs by a few thousand–coupled with the the fact that 1973 business strikes were only available in Mint Sets–allowed promoters to create an aura of importance around the issue as if it were the key date of the series.

In Original Government Packaging, we’d say that this is certainly not the case. There is not so significant a drop-off in mintage so as to justify the “key date” moniker. Even in the 70 grade, the ’73-S and ’74-S clad issues (sold in annual Proof Sets) are scarcer, and scarcer still with what we’d call true Deep Cameo where all of the devices are completely covered.

Nevertheless, expect to pay more for the 1973-S Brown Pack. Not much more, but prices between $17 and $20 are typical, if not somewhat undeserved.

PCGS reports 66 grading events under PR-70 DCAM; these are going for about $1,600 each. NGC has not awarded a 1973-S Silver Proof with their perfect grade.

An interesting facet of the 1974 Brown Pack Ike is its propensity for developing toning and haze. Collectors, who have not looked through hundreds upon hundreds of ’74 silver Ike Proofs may not realize this, but it is not uncommon to see examples from this date with rings of rainbow-colored toning along the inside of the rim. Some numismatic premium is warranted for the most colorful and flamboyant examples, but simply having some color in this area is not enough to raise the eyebrows of most series specialists.

A number of Proof 70 DCAMs have been graded by PCGS; one of these will run you into the mid-to-high $400s.

Over the years, the Eisenhower dollar collector base stayed more or less consistent with most modern issues in the post-silver era. Most collectors of modern issues are satisfied with one example from each date, whether certified or not. A smaller minority seek certified examples and are willing to pay a premium, sometimes a significant premium for the best examples, as certified by PCGS or NGC.

A difference in grading standards between PCGS and NGC has existed for this series for decades, and while PCGS’s grading for Ike dollars has noticeably loosened over the course of the past four or five years, the finest known Ikes are typically found in PCGS holders.

Proof coins are more homogeneous in appearance than their “imperfect” clad business strike cousins and this is one of the reasons why, even in the grade of 70, Brown Pack Ike dollars sell for less than one might expect given the population size.

There is an upside to all of this, however. The Ike dollar is affordable, widely collected, and, in the case of the four-year run of Brown Packs, uncommon in perfect grades.