We hear about many rare coins in the media that are worth big bucks, inspiring some of us to seek out these valuable pieces in hopes of striking it rich. The disappointing reality is that most of the coins making headlines are extraordinarily rare and thus virtually impossible to find in pocket change these days.

In other cases, the coin is absolutely unique – in other words, a duplicate will never be found.

So, what are some of these rare coins and what are they worth? Perhaps more importantly, why is it that your chances of finding any of these coins under the couch cushions are (probably) slimmer than your odds of winning a big prize in the lottery? Let’s take a look at five of the most commonly publicized rare coins that everyone thinks – or at least hopes – they have in their pocket change. While among collectors the 1909-S VDB Lincoln cent may be the most discussed of 20th-century numismatic rarities, the 1943 bronze cent is the golden child of the general media. This rare, off-metal transitional error enjoys vast coverage on all of the mainstream news networks, widely marketed magazines, and even on websites such as Buzzfeed. What do you expect for a Lincoln penny that typically sells for more than $175,000 and has pulled in as much as $1.7 million? Headline central right there… and it only further encourages today’s fortune seekers to know that the first 1943 bronze cents ever discovered in the late 1940s were found in, yes, pocket change. But fewer than 30 or so exist and are virtually all accounted for.

There was a time not so many decades ago when Wheat cents still turned up with some regularity in circulation, but only a relatively tiny number remain in active circulation. As for the 1943 bronze cent? Any candidate resembling this error needs to pass a battery of tests: it must not stick to a magnet, it must weigh approximately 2.98 to 3.24 grams, and it must have the appropriate die markers (such as the elongated “3” in the date). All of this, of course, before even thinking about submitting it to a third-party coin grading service. Needless to say, not many supposed discoveries of this elusive coin even get that far before being turned away at the authentication firm for having an altered date or turning out to be counterfeit.

This incredible variety ranges in value between $25,000 and $50,000, sometimes more, and is to most folks an ordinary-looking 1969-S Lincoln Memorial cent. Typically, non-numismatists look for any sign of doubling on their 1969-S pennies, going mad looking at all 1969 Lincoln cents regardless of the mintmark. In the vast majority of cases, coin dealers will see a bunch of 1969-S Lincoln cents walk into their shops with machine doubling, a common defect that occurs with aging dies or because of other typical strike mishaps.

As the “S” mintmark was punched onto the hub-doubled die, it does not appear doubled on a true 1969-S doubled die. Suffice it to say, many hopeful people wind up disappointed when they learn from a dealer’s mouth that their “double die” is simply an example of machine doubling. Perhaps more frustrating for everyone involved is that there are many valuable resources online illustrated with clear photographs showing exactly what a 1969-S doubled die looks like, right down to precise diagnostics. Unfortunately, many folks either don’t take the time to look this information up or don’t feel confident in their skills to recognize these diagnostics on their own and thus take their 1969 pennies to a dealer “just in case” any are doubled dies.

Another Lincoln Memorial cent that’s grabbing a lot of attention recently is the 1982-D Small Date bronze cent, a transitional error that was long theorized but only confirmed in late 2016. Nobody really knows how many were made, but the fact that it took 34 years for confirmation on the first and an additional couple of years to find the second (following a period of heavy publicity on the discovery piece) suggests there must not be many around. With an average going price of around $15,000 for the 1982-D bronze small date, it’s no wonder folks are looking for the next example, if another is to be found.

One major issue coin dealers encounter with folks claiming to have found a specimen of this extremely rare issue is that the coins they see are typically a copper-plated zinc small-date cent (common), not a small date (oops), or that it doesn’t even contain a “D” mintmark (um…). Of course, the 1982-D small date bronze penny is just that – it’s a small date variety struck on a bronze planchet in Denver that must weigh between 2.98 and 3.24 grams. Determining a small date is easy if you know what to look for; the “2” has a curvier base, the tops of the date numerals must all meet along the same imaginary plane, and the inscription LIBERTY and motto IN GOD WE TRUST also appear a bit smaller. 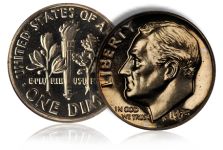 If some coin dealers had a dime for every 1975-P Roosevelt dime they see coming into their shops in the hands of an excited non-numismatist, they could happily retire right now. But alas, it doesn’t work that way, nor does anyone has a real shot of finding a legitimate 1975 No-S proof Roosevelt dime in pocket change. Only two are known, and the last sold for a whopping $349,500 in 2011. There has not been a new discovery of the 1975 No-S Roosevelt dime since 1979. If a third surfaces, it’s not going to be found in the handful of coins you get as change during your next stop at Wawa.

The best chance anyone has of finding another 1975 No-S Roosevelt dime is in a cache of unopened 1975 proof sets. All of those mintmarkless 1975 Roosevelt dimes turning up in circulation? They’re just common Roosevelt dimes from the Philadelphia Mint, which did not place a “P” mintmark on its dimes until 1980.

Do you know what happened when the news broke in 2016 of a 1970-S Washington quarter overstruck on a 1941 silver Canadian quarter being offered for $35,000? The proverbial numismatic switchboards lit up with phone calls from people all over the United States who believed they found “the” rare 1970 Washington quarter. The problem is, none of them ever found the publicized error. That’s because only one exists, and it was already accounted for.

There’s never been a verified reason as to why the San Francisco Mint would overstrike a 1970-S Washington quarter on a 1941 silver Canadian quarter. However, the fact it was struck on a Canadian quarter minted 29 years earlier suggests the error was probably the result of a prank or another unsanctioned action from someone working with or having access to the San Francisco Mint. Otherwise, its creation just makes no sense. So, America, yes – it’s safe to spend all those 1970 Washington quarters you saved!