Many coin series come and go, never to be struck again. And others take a numismatic bow only to hit the stage one more time for a surprise encore appearance some years later. Many United States coins have come back after years absent from the production schedule, as happened to many larger-denomination coins during the leanest years of the Great Depression in the late 1920s and early ’30s.

But one-dollar coins have fielded some of the most notable production droughts, only to make an unexpected and short-lived return. Here’s a look at four United States dollar coins that returned for a brief encore run before their lights went out for good.

One of the earliest United States dollar types led the way for the numismatic encores profiled here.

The Draped Bust Dollar was struck from 1795 through 1804, though the original production period spans until only 1803. Striking of silver dollars came to an end following a period of relatively low silver deposits at the United States Mint and a major shortage of circulating small change.

Additionally, many of the silver dollars that were struck in the late 1790s ended up being shipped to China, which had a high demand for silver bullion. Most of these coins never came back from Asia. Thus, Draped Bust Dollars are considerably scarce today, with perhaps fewer than 3% of all ever made still in existence – and most of these survivors are cleaned, holed, or otherwise significantly damaged.

Director of the United States Mint Elias Boudinot requested production of silver dollars to end in 1803, with silver coin production to be focused on striking half dollars and other small-denomination coinage. The last Draped Bust silver dollars were coined in March 1804, with a total of 85,634 dollars struck in 1804 but bearing the “1803” date. An official decree in 1806 by Secretary of State James Madison formally ended the production of silver dollars and $10 gold coins two years after the last rolled off the presses. But that wouldn’t be the end of the line for the Draped Bust Dollar – or the $10 Gold Eagle, for that matter.

In 1834, a handful of diplomatic Proof sets was produced, with recipients to include the Sultan of Muscat and King of Siam, among other international heads of state. Anchoring each of these Proof sets were an 1804-dated Draped Bust Dollar and Capped Bust to Right $10 Eagle. The 1804 Draped Bust Dollar, though dated as a chronologically consecutive continuation of the previous run of silver dollars last stamped “1803”, was minted sometime in 1834 or 1835 – a full 30 years after the previous Draped Bust Dollars ran off the presses. The Morgan Dollar is one of the most popular United States coins, and its appeal as a collectible in part owes to its significant place in American history. Morgan Dollars circulated throughout the western United States and represented a major share of the coinage output at the United States Mint facilities in Carson City and San Francisco. These large, hefty coins are often romanticized by collectors for their connections to the Old West, a concept further cemented in popular culture by the frequent appearance of or references to Morgan Dollars in Western-genre television shows and movies.

The Bland-Allison Act, authorizing the Morgan Dollar, was enacted on February 28, 1878. It required the United States government to buy a certain amount of silver and convert it into silver dollars. A steady stream of Morgan Dollars henceforth flowed from the United States Mint. The Sherman Silver Purchase Act of 1890 only increased the amount of silver bullion the government was mandated to convert into silver dollars, and for a time the large dollar coins were struck to the tune of two million each month.

But after Sherman Act mintage quotas expired after 1891, the production of silver dollars dropped off in 1892 – a trend corrected with an 1898 congressional order requiring all remaining silver purchased under the Sherman Act to be coined as silver dollars. That bullion supply ran dry in 1904, and so did the flow of Morgan Dollars. Yet, that wasn’t the end of the road for the Morgan Dollar. 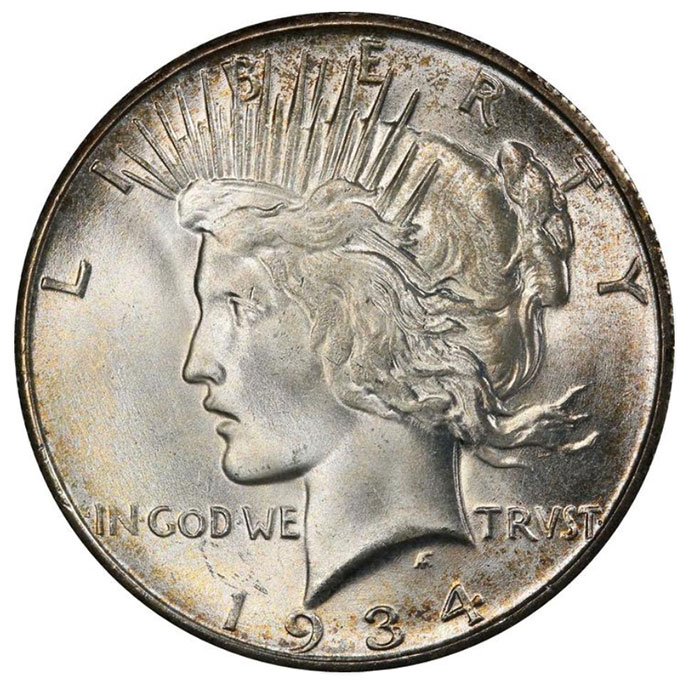 May 9, 1921, the very day the first 1921 Morgan Dollar was struck at the Philadelphia Mint, a joint resolution was introduced in Congress calling for the creation of the Peace Dollar.

A competition was held to select the design for the coin, with sculptor Anthony de Francisci winning for his obverse design featuring a young Miss Liberty wearing a crown of rays in the fashion of the Statue of Liberty; the reverse of the Peace Dollar depicts an eagle resting upon a rock with an olive branch in one talon and the background awash in the glow of a rising sun.

The Peace Dollar was produced in the waning days of 1921 as a high-relief coin and saw much larger production figures beginning in 1922. The Peace Dollar was struck by the millions as authorized by the Pittman Act. However, by 1928 the silver allocated under the Pittman Act had been exhausted and production halted. The start of the Great Depression in 1929 only further negated the need for new silver dollars.

In 1934, an act of Congress required the United States Mint to buy large quantities of silver from domestic sources. This resulted in the production of more than seven million Peace Dollars in 1934 and 1935, though there was little commercial demand for silver dollars in the mid-1930s during the heart of the Great Depression.

At the height of a major coin shortage, Congress passed legislation in 1964 authorizing the production of up to 45 million silver dollars. However, the move was deemed by many in the public as a frivolous use of United States Mint resources during the coin shortage and of benefit only to numismatic enterprises and Nevada casinos. A quantity of 316,076 silver dollars bearing the 1964 date and a “D” mintmark from Denver were melted under tight security, ensuring a second encore for the Peace Dollar would not be had. 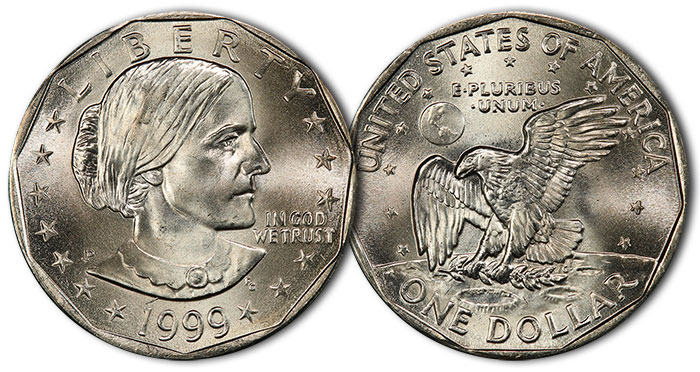 While the 1964-D Peace Dollar never hit the streets, silver dollars eventually reemerged. In 1971, the Eisenhower Dollar debuted. But few Americans seemed keen on toting around heavy dollar coins with double-digit inflation diminishing the value of the dollar virtually around the clock. In response to public feedback, proposals began floating for a small-sized dollar coin in 1977.

This led to the creation of the Susan B. Anthony Dollar, which was signed into law by President Jimmy Carter on October 10, 1978.

The United States Mint struck 500 million Susan B. Anthony Dollars ahead of its release on July 2, 1979, though the coin quickly proved unpopular with the public. One of the biggest complaints about the coin was its similarity in size and color to the Washington Quarter. Despite valiant marketing campaigns by the Mint to help boost support for the coin, the Susan B. Anthony Dollar failed to catch on in circulation. The coin was retired at the end of 1981.

By the mid-1980s, Susan B. Anthony Dollars were finding new life among transit authorities and in postage stamp vending machines. Government holdings of Susan B. Anthony Dollars were depleted at a rapid pace throughout the mid-1990s. Nearly 230 million “Susie Bs” lay in vaults at the start of 1996 but by the closing days of 1997, that number dwindled to 133 million. Talk of a replacement came in short order, and the United States $1 Coin Act of 1997 ushered in the Sacagawea Dollar.

But before the manganese brass coin could debut, sharp demand – perhaps linked to individuals wanting “hard money” ahead of Y2K concerns and scares that computer-based bank accounts would freeze – caused the government to look at striking new dollar coins sooner than anticipated. With the Sacagawea Dollar not authorized for production until 2000, the United States Mint struck more than 40 million 1999 Susan B. Anthony Dollars as a stopgap measure to satisfy public demand. The introduction of the Sacagawea Dollar the following year closed the books on one of the most controversial but colorful coins of the 20th century.