Tom Bender is a good client of mine as well as a friend, and it was with great interest that I followed the sale of his Carson City gold and gold dollar sets in the recent Heritage 2022 (post) ANA auction.

Before I discuss my dozen favorite individual coins, I think it is worth looking at each of these sets as a whole to give them context within the market.

Assembling a set of Carson City gold is no easy task, and my hunch is that Tom was surprised at just how difficult these coins were to acquire in high grades, especially given his success rate with Carson City silver. For many years, Tom passed on nice uncirculated CC double eagles that I offered due to them being “too baggy.” Finally, Tom came to realize that virtually all CC $20s are abraded–at least in comparison to the lower denomination gold issues from this mint, which can from time to time be located with reasonably choice surfaces.

How does Tom’s set stack up against other significant Carson City gold sets? The half eagles are clearly among the best ever assembled. There were a few marginal individual coins (1875-CC, 1877-CC, 1878-CC, and 1882-CC), but there were a number of finest known and high Condition Census pieces, and the 1876-CC (see below) is, in my opinion, an extremely special coin.

The $10 eagle set was probably the weakest of the three (as is the case with 90% of the complete CC-gold sets that have been assembled in the last three-plus decades). Nevertheless, there were a number of really good individual pieces and, with some tweaking, it could have become among the best sets of Carson City Ten Libs ever constructed.

The double eagle set was above-average. Tom stayed away from common coins in uncommon grades and his most intriguing individual coin (besides the 1870-CC) was a really nice PCGS/CAC MS62 1891-CC.

Tom’s set of gold dollars was among the best ever formed. He had the benefit of having his main competition for this series (Steve Duckor and Bob Simpson) leave the market before he did, and thus had the pick of their former coins – sometimes at comparatively reasonable price levels.

It wasn’t easy to limit myself to selecting a dozen coins, but in the interest of your reading time and my sanity, this is all I’m going to say on this subject. I sold this coin around 20 years ago to a Orange County, California collector who held it for a few years, and then sold it–along with his other CC gold–in the 8/2006 ANR auction where it brought $80,500. This was a record price for this date in AU58, which stood until the Stack’s Bowers 8/2021: 4260 coin realized $150,000. The Bender coin remains the single nicest AU58 I’ve ever seen of this issue and, unlike the coin that sold in 2021, it is the more desirable Winter 1-A variety, which has full neck feathers on the eagle. Given the super-heated market for any gold coin dated 1870-CC, you knew this coin was going to bring a ton of money and it didn’t disappoint as it brought $168,000 (note: all prices in this article include the 20% buyer’s premium). This is the single finest Carson City gold coin in existence, and nothing else even comes close.

I purchased it for $138,000 in the Bowers and Merena 7/2002 sale of the Henry Lang Collection and sold it to a Nevada collector who, in turn, sold it for $477,250 as Lot 11107 in the August 2012 Battle Born auction. Tom purchased it via private treaty from a client of dealer Al Adams after it failed to sell in the May 2015 Stack’s Bowers sale. I remember discussing the potential purchase with him by phone and strongly urging him to buy as it would become the centerpiece of his CC gold collection. This time around it brought $780,000, which is easily a record for any CC half eagle. It is also the third-highest price ever paid for a CC gold coin. When I offered this coin to Tom Bender around a decade ago, I told him that he should buy it as a “placeholder” as it was unlikely he would find a better one and that he wouldn’t lose money on this Choice EF if and when he did. To no one’s surprise, he never found a better one while levels for this popular issue skyrocketed. Luckily for potential buyers, there were two recent comparables to guide them: Heritage 1/2022: 3711 (PCGS/CAC EF45 but nowhere near as nice as the Bender coin, which brought $132,000) and Stack’s Bowers 4/2022: 3261 (PCGS EF40 and not attractive in my opinion; it still brought a respectable $105,000). The Bender coin sold for $192,000, which is another record for this date. In all my years of dealing with Tom Bender, I always regarded him as a savvy auction bidder and clearly not someone who would have paid $192,000 for this exact coin in January 2022. This struck me as Irrational Exuberance at its early 2022 extreme. Don’t get me wrong; I loved the coin and it is clearly the finest known 1876-CC $10… but almost $200k for an 1876-CC? Yikes.

The coin sold for $144,000, which I think is still a TON for this specific coin, especially given that it isn’t even in the overall Top 5 for high-grade rarity among the eagles struck at this mint. This was almost certainly the only CC gold coin in his collection that Tom lost money on, though I wouldn’t feel too sorry for him as his coins brought pretty spectacular prices straight through. If you follow the CC gold market, you are well aware of the absolutely insane prices that this date has been bringing at auction. In November 2021, Heritage sold a PCGS AU53 for $1.620 million, and in April 2022, Stack’s Bowers sold a CAC-approved PCGS EF45 for $810,000. I was not a fan of the Bender coin. It was splotchy and cosmetically unappealing. But 1870-CC double eagles are essentially all ugly (although I thought the Fairmont/”Hendricks” EF40 coin was more deserving of its CAC-approved status), so as a collector, you have to settle for whatever is out there. The coin brought $456,000, which seems cheap when compared to the “Hendricks” coin but is actually strong when you take away the plastic and focus on the actual coin. Since this is an 1890s issue, people don’t realize just how rare this date is in real BU. This is one of just five graded MS62 by PCGS (with a sole MS63 finer), while it is one of three in this grade with CAC approval with none finer. And this wasn’t a faux-62; it was a really nice coin with good color and nice surfaces.

Interestingly, just two in this grade (at PCGS) had sold since 2008. In April 2021, an NGC/CAC MS62 shattered all records for the date when it bought $90,000. I was certain that this coin would set a record price, and it hammered for $156,000 – which I regard as an extremely strong price, but one which makes a lot more sense than some of the results for CC double eagles achieved at the “Hendricks” sale. 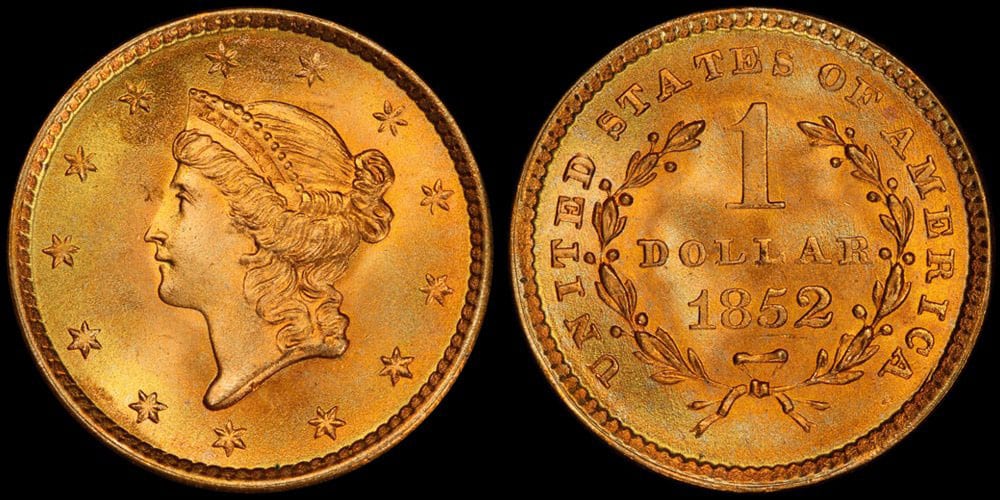 Generally, I tend not to care for very common coins in very uncommon grades. This MS69 obviously qualified as such, but what a coin! I believe that this is the single finest Dahlonega gold dollar in existence.

In person, the quality of this 1853-D was ridiculous. It was amazingly well-defined and it was an early die state with numerous mint-made raised horizontal die lines on the obverse; something I don’t recall having seen on any other gold dollar from this mint. It had last sold for $78,000 in the Heritage 2021 FUN sale as part of the incomparable Simpson gold dollar set. I badly wanted to purchase this coin for a wonderful set I’m building for a specialized collector, but I was the underbidder. The coin sold for $108,000, which, as far as I know, is a record price for any Type One D mint gold dollar. If this had been an ANA sale held 25+ years ago, this Superb Gem 1855 would have been the most talked-about gold dollar in the entire auction. This issue has lost a lot of the cachet it held back in the day but there is no denying that true Gem examples remain very rare and essential for Registry Set gold type collections. The late dealer David Akers had the all-time best eye for superb quality US gold coins and this was one of the group of a dozen or so pieces he used to display in his showcase at major conventions. I can’t remember what this coin was originally graded after Dave got it slabbed, but it was a coin I always loved and which I wanted in the Bender sale to buy after fanning on it in two previous auction appearances. In the Duckor Collection sale (8/2015), it brought $42,300, with Bob Simpson being the winning bidder. He then sold it in January 2021 for $43,200. This blows the doors off the previous record-high of $109,250, which is what Bob Simpson paid for the other PCGS/CAC MS66 1875 gold dollar in February 2010 – a decision that didn’t work out well as it resold for $72,000, likely because of a questionable decision to jettison the old green label holder it had previously resided in to try for an upgrade. The Bender coin is spectacular with amazing surfaces, and it brought an exceedingly healthy $132,000. But you’ve got to put this in perspective: there were two perfectly nice PCGS/CAC MS68+ gold dollars in the Bender Sale that brought $15,000 (Lot 3846: an 1880) and $15,600 (Lot 3847: an 1881), respectively. I can’t begin to imagine paying a 9x multiple for such a small gain in Registry Set points, but that’s just an old coin curmudgeon spewing his bile.

Congratulations are in order for Tom Bender. He assembled great sets of CC gold and gold dollars and he profited handsomely for his commitment to excellence.