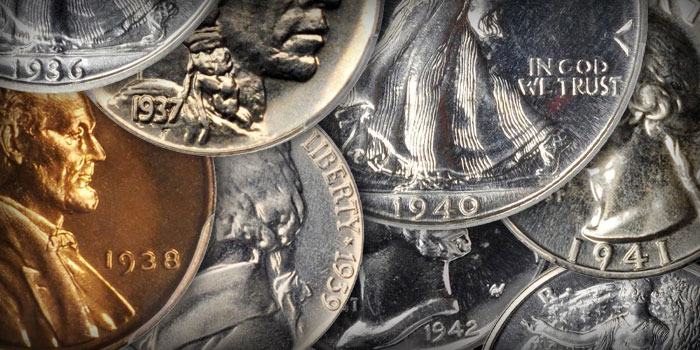 The United States Mint is the largest coin dealer in the world. Aside from bullion items, the vast majority of the coins they sell come in the form of Proof and Mint Sets. The Proof Sets consist of specially struck examples, where care has been given from planchet to final product. Today these coins are produced by the millions for consumption by the modern collector markets.

But this has not always been the case.

Up until 1858, Proof coins were only produced on special request, as trade bait for the Mint cabinet, as gifts for dignitaries, or for other political purposes. In the mid-19th century, officials recognized the profit potential of Proof coinage and began creating Proof specimens for sale to the general public. These sets were produced to include all the base metals and gold and were sold at a premium individually or in various combinations. The sale of Proofs continued until 1916 when the Matte Proofs of some of the new designs saw little interest. The Treasury Department ceased production of the specialized pieces, and between 1916 and 1936 only a few select Proof examples were created. In 1936, as the nation recovered economically from the Great Depression, the Mint again began producing Proof examples for sale to the general public.

Now, the early sets from 1936 to 1942 are some of the most highly collected Proof issues.

The iconic designs within are among the most beautiful examples in American numismatics and maintain heavy demand. The short-lived series of Proofs across all denominations is obtainable with due diligence. The group of coins can be assembled without any true stoppers and remains an excellent target for modern collectors with a penchant for the inherent vibrant beauty of Proof coinage.

A Brief Breakdown by Year

The following is a brief description of each year in these early modern sets. They are heavily collected as a whole or are purchased individually by enthusiasts of every single denomination. The early Proof examples were available individually or as a set at the Mint. It wasn’t until 1950 that only sets were produced and the individual mintage figures for each Proof denomination produced from 1936 through 1942 vary, with cents and nickels having the largest production numbers.

In 1936 the early cents and nickels were produced with satin finishes. These early examples were not well received and the sale of sets suffered despite the Mint’s shift to brilliant Proof surfaces later in the year. Certified Cameo Proof designations for the series are scarce to non-existent, with visual contrast carrying a premium among astute collectors. The mintage figures increased in this second year, and all coins were produced with brilliant Proof surfaces. Despite the increase, production was still limited by today’s standards with all denominations’ production under 10,000 and all but the cent under 6,000. The quarter again saw the lowest mintage figure. The early sets were sold in individual cellophane sleeves, which over time have created golden iridescent hues across the Proof surfaces of many examples. Some collectors seek out the pearlescent toning, while others prefer the vibrant full brilliance of the coins as struck.

Mintages increased again in 1938, partially due to demand for the new nickel design that was included in the set. Requests for the first year of issue Jefferson nickel in Proof drove the mintage figure to nearly 20,000 examples, dwarfing all the denominations of the earlier two years, and more than doubling the silver issues of this year. Even though the mintages rose annually throughout this short-lived series, the 1938 Proof nickel production figures are not matched until the final year when another design change occurred. Cameo Proofs of all denominations remain scarce in this third-year set, and with sets having been sold packaged in the cellophane, survivors with attractive iridescence remain in demand. Production increased modestly in the fourth year of the series with cents and nickels continuing to lead the way, each with mintages over 12,000 each. The reverse nickel design was altered with sets produced featuring either of the two varieties. The steps on Monticello on the reverse were sharpened for better definition and production quality. The ends of the steps were clarified and the top step was widened to represent more of a porch than a step. Thus, the Type 1 (reverse of ’38) is identified by uneven step widths with softer endings and the Type 2 (reverse of ’40) has clear step endings, a wider top step, and a sharper definition. The Type 2 in Proof is the scarcer of the two. Cameos for the date remain elusive but population reports of Cameo survivors in the smaller denominations show a scant few examples. This is an increase over the previous years wherein they were virtually nonexistent.

The total production of Proofs increased again in 1940, with total mintages for every denomination topping the 10,000 mark. The cents and nickels still were produced in higher numbers, with several thousand individual examples being sold by the Mint. A couple of varieties exist for the year. The nickel was produced with both the reverse of ’38 and the reverse of ’40. The reverse of ’38 remains elusive with less than 300 total coins graded with the variety designation by PCGS and NGC combined.

The Walking Liberty half dollar was also struck in two varieties. The dies were heavily polished causing the loss of the designer initials. Coins were struck without the AW inscription and these “No Monogram” examples are believed to be rarer than those bearing the AW. The variety has not garnered much attention by collectors and lacks a specified designation by either PCGS or NGC.

And as with previous years, designated Cameos for the silver issues remain non-extant, with a few cameo copper and nickel examples appearing on the pop reports. 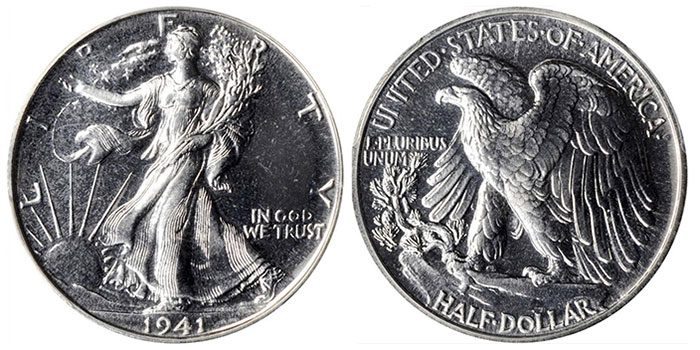 Demand for Proofs had increased dramatically since 1936. In 1941, the overall mintage figures rose by 35%. The individual coins were still sold by the Mint, with the copper and nickel examples garnering the most interest. For the first time, silver issues were struck in quantities that exceeded 15,000 pieces. No Monogram halves can still be found in 1941 with the over-polished reverse still in use. The year 1942 saw the United States enter World War II. The shortages of metal compelled the Mint to change the composition of the nickel. The old alloy was replaced with a manganese/silver one, adding a large mint mark on the reverse to denote the change. The Proofs were all struck in Philadelphia and exhibit the “P” above Monticello. The sets were sold with either one of the two nickel varieties and no official six-coin sets were issued featuring both types. These are assembled today by collectors wanting the complete run of Proofs from the year.

In conclusion, Proof coins are more popular today than ever. The series that runs from 1936 to 1942 is extremely popular and collected in its entirety or by denomination. The coins are readily available in all grades up to Gem, with Premium Gems and better becoming elusive – especially among the earlier dates.

1936 – the first year of issue – is the key year for all dates and denominations. As mentioned, coins exhibiting significant field-to-device contrast command a premium. Coins with attractive original iridescent hues are also high in demand. And while unusual, any of the series with dramatic color will command a premium.

Regardless of your personal preferences, we invite you to explore this fascinating series and the historic glimpse they give of the era between the Great Depression and World War II.