The Jefferson nickel debuted in 1938, replacing the Buffalo nickel in the 25th year of its production run. A design contest to commemorate Founding Father and third President of the United States Thomas Jefferson, open to “all American sculptors”, was held in 1937. German émigré and American artist Felix Oscar Schlag was the winner. He received $1,000 for his effort.

19,496,000 Jefferson nickels dated 1938 were struck at the Philadelphia Mint, but the coins didn’t enter into circulation until late in the year. And because it was the first year of issue for a new coin type, people set aside several examples from change and some even sought out rolls of Jefferson nickels to accumulate. This means that the 1938 is still a fairly common coin today, in almost all grades, although it’s highly unlikely that you will find one in your pocket change.

In terms of strike characteristics, the United States Mint struck the 1938 Jefferson nickel in a quality that is best described as inconsistent. This is not an issue that is particularly difficult to acquire with Full Steps designation, but fully struck examples are the exception and not the rule. These are coins that were struck from fresh hubs and the true difficulty of finding well-struck examples would not become apparent until the 1950s and ’60s.

What is a 1938 Jefferson nickel worth? In circulated grades, the 1938 is worth about 25 cents. In uncirculated condition, a collector should expect to pay a minimum of $3.00 for an uncirculated example in a 2×2 flip, upwards to $300 to $400 for an example in Superb Gem with Full Steps. 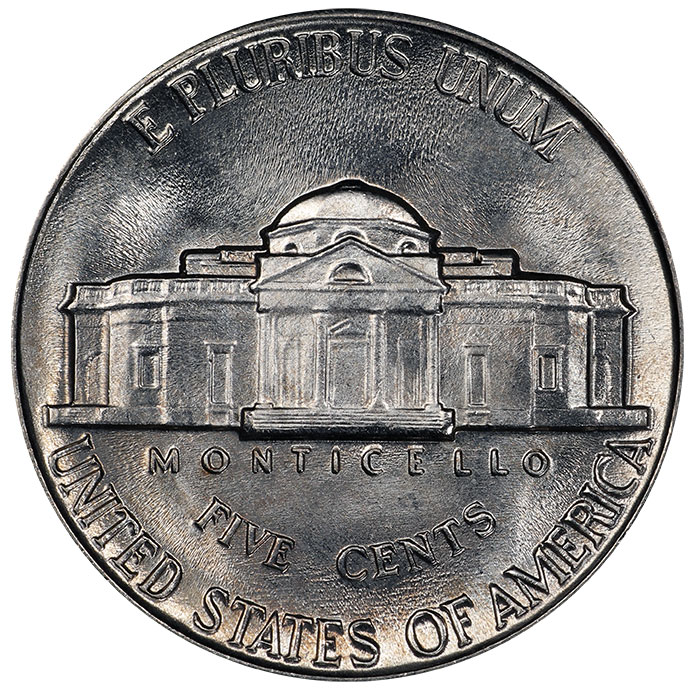 In January 2017, Heritage Auctions sold a PCGS MS67+ example in a 30th Anniversary Green Retro Holder for $3,290.00. This coin had pleasing (yet typical) lavender and ice blue toning. Two years prior, Heritage sold another example (though, to our eyes, not as nice), for $4,935. At the time this was the sole example to earn the MS67+FS grade. The 2017 coin is the second to earn this half-step upgrade.

A left-facing bust of President Thomas Jefferson, including a colonial-era pigtail and strikingly similar in detail to the profile of Jean-Antoine Houdon’s 1789 bust, takes up the majority of the obverse. The top of his head almost touches the rim, and the barest of truncations is visible at the bottom where Jefferson’s left shoulder meets the edge of the coin. The motto IN GOD WE TRUST–which became the national motto in 1956–arcs clockwise along most of the length of the left side of the coin, starting from Jefferson’s chest and extending to his hairline. The inscriptions LIBERTY and the date 1938 run clockwise along the right side behind Jefferson. A small five-pointed star divides the two inscriptions.

The edge of the 1938 Jefferson nickel is smooth or plain.