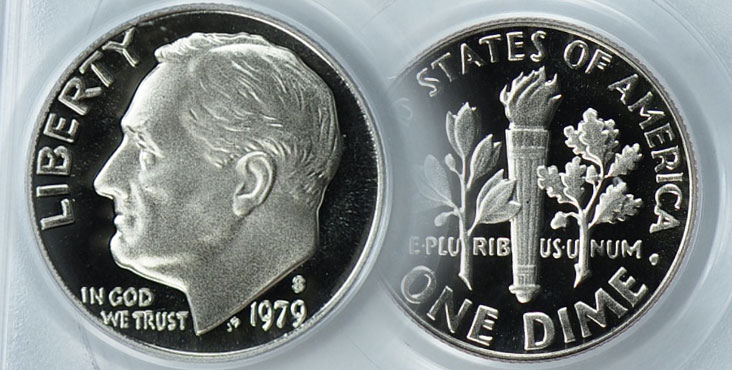 A modern Proof coin, the United States Mint struck the 1979-S Roosevelt dime for inclusion in the annual Mint Set offered to collectors. Since production figures directly mirrored demand, the Mint struck a total of 3,677,175 Proof dimes that year. Containing $1.91 USD in face value coinage, these sets were sold for $9 ($30.10 adjusted for inflation), the price since 1977 when it was increased from $7 in 1973. As such, this year represents the largest mintage since 1976 and is one of the larger issuances between 1968, when the responsibility for striking Proof Roosevelt dimes was shifted to San Francisco and 1992, when the Mint reintroduced silver Proof coins. Only four issuances during this time period were larger: 1976-S, 1981-S, 1982-S, and 1987-S.

Interestingly, despite the dollar coin’s size reduction (the Susan B. Anthony dollar has a diameter of 26.5 mm versus the Eisenhower dollar’s 38.1 mm diameter), the set’s packaging had not been redesigned. Therefore, the Mint inserted a round plastic ring into the larger hole to accommodate the smaller denomination (the packaging was changed properly in 1980).

As with all of the 1979 Proof denominations, the Roosevelt dime had two types of mintmarks. Type 1 marks have the area inside the “S” filled while the Type 2 “S” mint mark is hollow and flat on top. While a number of graded examples are not given either a Type 1 or a Type 2 designation, the second type is slightly more scarce. In total, the combined certified population (PCGS and NGC) shows 12,258 Type 1 and 9,735 Type 2 dimes. Both types are included in the total mintage for the date.

Since these coins were not intended for circulation, the vast majority of the 1979-S Roosevelt dime remains in mid-to-high Proof grades. As a result, there are very few sales records for low-grade examples. If an example graded lower than PR 60 were to be sold, it would be valued only between face value and $1. From PR 60 to PR 66, these coins sell for $1 to $5. As usual, eBay sales prices are generally lower than auction hammer price, and in PR 67, eBay sales float around $7 to $10 – though auction prices for the same grade can hit as high as $20. These prices hold steady through PR 68 and PR 69. Additionally, for Type 1 examples graded PR 70 DCAM (Deep Cameo), the prices remain between $10 and $20.

However, the finest pieces of Type 2, graded as PR 70 DCAM, generally sell for between $20 and $50. One essentially flawless piece, sold by David Lawrence Rare Coins in their August 2021 Internet Auction #1181, garnered $35. These prices have dropped dramatically in the past 20 years. Back in 2002 and 2004, Heritage Auctions regularly sold similarly pristine pieces graded PR 70 for upwards of $300 to $400. These extremely high prices began dropping in 2005 and 2006 and have continued to drop through the present day.

Most of the obverse design consists of a left-facing bust of the beloved late 32nd President of the United States, Franklin Delano Roosevelt (served 1933-45). In the northwest quadrant, directly in front of Roosevelt’s face, is the standard legend LIBERTY. Below the president’s chin in smaller letters is the motto IN GOD WE TRUST. Directly below the neck truncation on the bust are the designers’ initials (JS). Placed at a slightly higher line than the motto and to the designer’s initials right is the date (1979). Unlike earlier Proof dimes struck before 1964–when Proof dimes were struck by the Philadelphia Mint–later Proofs were struck by the San Francisco Mint and display the “S” mintmark on the obverse above the date.

Centered in the reverse design is a flaming torch symbolizing liberty. The torch sits between the olive branch of peace on the left and the oak branch of victory on the right. Split into four parts between the branches and torch is the USA’s traditional motto: E PLURIBUS UNUM. Since the words are divided as follows, E PLU / RIB / US U / NUM, there are centering dots between each word. This central design is completely surrounded by the words UNITED STATES OF AMERICA at the top and the slightly larger denomination ONE DIME at the bottom.

John R. Sinnock became the eighth Chief Engraver of the United States Mint upon George T. Morgan’s death in 1925, holding the position until his own death on May 14, 1947. In addition to being chosen by Mint Director Nellie Tayloe Ross to design both the new Roosevelt dime and the Franklin half dollar in 1946, Sinnock is also responsible for engraving the 1926 Sesquicentennial American Independence half dollar and gold $2.50 for the 150th anniversary of the United States of America. Sinnock also helped sculpt the United States Army’s modern Purple Heart Medal for Military Merit given to soldiers wounded in combat.