At yesterday’s marathon meeting of the Citizens Coinage Advisory Committee (CCAC), design candidate portfolios for several programs were reviewed and discussed, with committee recommendations to the Secretary of the Treasury ultimately being made. The common obverse of all Native American $1 coins features Glenna Goodacre’s portrait of Sacagawea and child; the design and theme of the reverse changes each year. The back of the 2019 Native American dollar coin honors the contributions of American Indian men and women to space exploration and manned space flight, while the 2020 $1 coin honors civil rights pioneer Elizabeth Peratrovich and the 75th anniversary of Alaska’s groundbreaking 1945 anti-discrimination law.

For the 2019 issue, the Commission of Fine Arts (CFA), the Senate Committee on Indian Affairs, the liaison to the Cherokee Nation and the family of the first female Native American engineer Mary Golda Ross all expressed a preference for reverse 10 – though the CFA recommended that a handful of revisions be made to simplify the design. The Congressional Native American Caucus of the House of Representatives preferred design one (see link above).

For 2020, the CFA, the Senate Committee, the Tlingit tribe (of which Peratrovich was a member) and Peratrovich’s family all recommended design six. The House Caucus preferred design 11.

The CCAC recommended design eight for the 2019 and design nine for the 2020 Native American dollars.

The three feathers on the 2019 design stand for the three tribes represented by three key Native American figures in the U.S. space program: astronaut John Herrington (Chickasaw), Mary G. Ross (Cherokee), and engineer Jerry C. Elliott (Cherokee and Osage). Feathers are also important to Native American culture in general as a means of carrying the power of prayer to the Creator, and so for these reasons the CCAC decided that the winning design must include at least one feather.

There was some debate regarding design nine for the 2020 issue. As CCAC member Erik Jensen pointed out, while many of the design candidates attempted to represent the Native American style of art commonly found along the Northwest coast of the Pacific (“ovoid art”), all of them broke the rules of the art form in one way or another. The bothersome aspect of design nine was the potentially confusing mashup of Native raven with Western lock and key. But other committee members, such as Whitman Publishing’s Dennis Tucker, viewed the combination of styles as symbolic of the spirit of the anti-discrimination law the coin is to commemorate. Revisions–such as the elimination of the equals sign–may be made. A commemorative honoring the Apollo 11 Moon landing finally became a reality when President Barack Obama signed Public Law 114-282 on December 16, 2016. The program consists of a $5 gold coin, a $1 silver coin, a clad half dollar and a $1 Proof five-ounce silver coin. Each piece will be curved like the 2014 National Baseball Hall of Fame commemorative coin set.

Design candidates for the convex reverse side were provided to the committee; a design competition, open to the public and currently ongoing, will determine the concave obverse side. The CFA recommended set three, and the CCAC made the same decision. 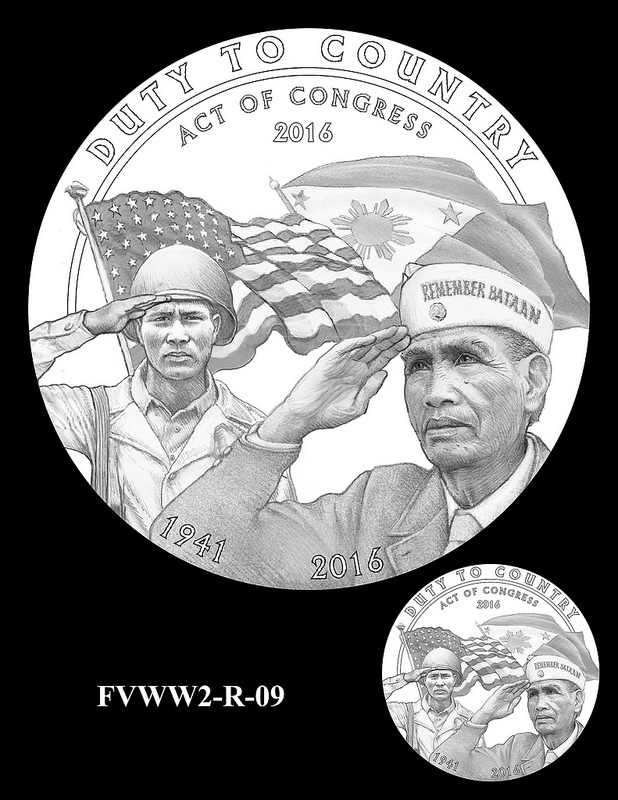 CCAC discussions of coin or medal designs commemorating veterans are always passionate and oftentimes poignant. The Filipino Veterans of World War two medal was no exception. Filipino soldiers who fought as part of the United States Armed Services after the Japanese invasion of the Philippines in 1941 were initially granted full veteran benefits after the war only to have them taken away by the Rescission Act of 1946. The 2017 Congressional Gold Medal is but one result of 70+ years of advocacy to give Filipino veterans–who were U.S. nationals at the time of their service–the respect and appreciation they are long overdue.

The CFA and the Filipino veterans themselves preferred obverse design four and reverse design one, though the veterans’ liaison to the Mint provided several corrections to make to the artwork regarding the apparel and armament of the fighters portrayed on the candidate obverses. Dennis Tucker offered some notable suggestions from his mother-in-law, whose own father was a Filipino veteran of World War Two. In her notes, she recommended that “World War Two” be spelled out to make it plain that the entire world was involved, and that the medal focus on the universal gesture of a salute instead of guns.

In the end, the CCAC decided to recommend obverse four, coupled with reverse nine. Obverse design 12 and reverse 21 for the Office of Strategic Services Congressional Gold Medal; the CCAC recommended to replace the parachutist on the reverse with an OSS frogman

The Office of Strategic Services, or the OSS, was the wartime forerunner of not only the Central Intelligence Agency (CIA) but most of the United States’ post-war intelligence apparatus. Founded in 1942 by William “Wild Bill” Donovan, the agency recruited academics as well as military men–and women as well as men–and was responsible for such technological innovations as a precursor to scuba gear, which was used by OSS frogmen behind enemy lines.

The liaison to the Mint, bearing the Tarantino-worthy name of Mr. Pink, laid out several requirements of the agency’s veterans group. A spear tip, symbolic of the fact that the OSS was often the first of the Allied forces to operate within enemy territory, must appear on the design, and it must also include a quote from Mr. Donovan’s farewell speech to his agents upon the disbanding of the OSS in 1945.

Obverse 15 and reverse 19 were the recommendations of the CFA. The OSS liaison also chose reverse 19, but preferred design 17 (with corrections) for the obverse. The CCAC selected obverse 12 but was unable to choose a reverse design on the first go-round. After further discussion, the committee recommended reverse 21 with a frogman in place of a parachutist.

In other news, new committee member Kareem Abdul-Jabbar was officially sworn in by Acting Director of the United States Mint Dave Motl. CCAC Chairman Mary Lannin then asked Mr. Abdul-Jabbar how he got into coins. He then said that he started collecting stamps as a kid but lost interest before he left grade school. By the time he left college and had some income to funnel into a hobby he became something of a gold bug, but thankfully he got out while he could (this was the early to mid-1970s). Around 2003 or 2004, he read Ron Chernow’s by-all-accounts excellent biography of Alexander Hamilton, and learning about the founding of the Federal Reserve got Mr. Abdul-Jabbar to thinking about how money was used at the time. This spurred him on to collect early U.S. gold coins (specifically Type One $20 double eagles), an interest he was again able to ride up until the famous price drop of several years ago.

“It’s not a tale of woe yet,” he said, referring to his collecting habits.

Abdul-Jabbar also expressed his gratitude for being involved on the CCAC, calling it “a real privilege.”

“The Basketball Hall of Fame is calling me now.”

Jovita Carranza, who became the new Treasurer of the United States back in May, also addressed the committee for the first time.