The Austrian Mint launched the Colorful Creatures series of three-euro glow-in-the-dark collector coins in October 2016 and will release a new coin about every three months until July of 2019. Colorful Creatures is the first series of three-euro coins produced by the Mint; they are legal tender only in Austria but as collector coins they are not intended for general circulation.

The second issue in the series–2017’s The Tiger–was released on February 22.

The reverse features a youthful yet mature tiger (Panthera tigris) sitting slightly to the right of center, its gaze focused on something beyond the viewer. The variegated foliage includes palms, ferns, vines, grasses and more – all of it representative of a tropical ecosystem. Another apex predator, a large boa, wraps itself around a low-hanging branch to the left of the tiger. The snake’s head is pointed towards the powerful feline, conveying a demeanor that is both curious and cautious.

A section of the coin’s field under the boa and to the left of the seated tiger is delineated by the negative outline of jungle grass. In this empty space is the word TIGER. On the apparently bare ground beneath the tiger’s feet is the year 2017. Both inscriptions are rendered in a clean, almost austere modern-looking font.

The tiger’s iconic pelt has been colored in the appropriate pattern of orange and white with black stripes. 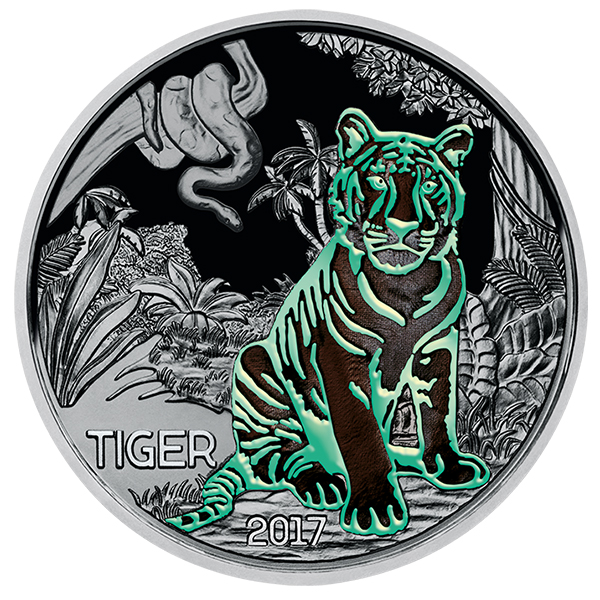 The application of glow-in-the-dark material is primarily on the black stripes of the tiger’s coat, but the general outline of the animal’s body and the salient details of its face (especially the nose and the whites of its eyes) have also been treated.