In an article that I read discussing the results of a past Heritage World Coin Auction it was mentioned that world coins may offer more “value” compared to U.S. coins.

I have collected for over 50 years. Don’t we all start with U.S. items? Yet today I collect no U.S. coins. I recognize that I am exuberant, maybe even “irrationally” so, about the investment potential of carefully selected non-U.S. numismatic items, both coins and banknotes.

I am influenced by confirmation bias.

According to the confirmation bias (also called confirmatory bias or myside bias), people tend to favor information that confirms their beliefs or hypotheses. People display this bias when they gather or remember information selectively, or when they interpret it in a biased way. The effect is stronger for emotionally charged issues and for deeply entrenched beliefs. They also tend to interpret ambiguous evidence as supporting their existing position. Biased search, interpretation and memory have been invoked to explain attitude polarization (when a disagreement becomes more extreme even though the different parties are exposed to the same evidence), belief perseverance (when beliefs persist after the evidence for them is shown to be false), the irrational primacy effect (a greater reliance on information encountered early in a series) and illusory correlation (when people falsely perceive an association between two events or situations) 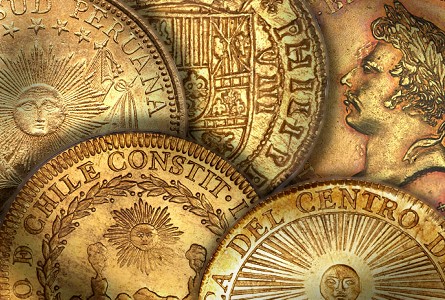 I analyzed the following factors to reach my conclusions. They are not listed in order of importance.

Wealth, creating demand, is rapidly increasing globally + coin collecting is not new, having been a hobby for thousands of years + as collectors add to their collections, the supply of better material decreases = investing in carefully selected numismatic items has a bright future.

I believe the best is yet to come because of these factors. The U.S. may not always be the center of the numismatic universe. If one looks at every country listed in ancient, medieval, world and world banknote catalogs, the value of U.S. material appears to be relatively overvalued. Or numismatic collectibles in many other countries might be undervalued, perhaps significantly.

If you think the market for better U.S. material is “dry”, i.e., there is a scarcity of desirable material, ask dealers who specialize in ancient coins, medieval coins, world coins, and world banknotes about their markets. Also, the better material in these other markets is often valued at a fraction of comparable U.S. material.

When I started collecting it was possible to put together a complete set of Lincoln pennies from change. This represented a lot of time but not much money. Today, one can spend a substantial amount of money very quickly as prices in all markets have increased. When a collector or investor who has previously collected only U.S. material looks at these other markets – ancient coins, medieval coins, world coins, and world banknotes – they are overwhelmed. I have collected non-U.S. material for over 20 years and have made my share of mistakes.

There is a challenge to learn about these other areas as the best books are often in the language of the home country. Because of the challenge of learning, aligning yourself with the right dealer(s) is even more important than for U.S. material. Everything is “foreign”. Creating a numismatic library about U.S. material is easy. Not so with “foreign” material. Therefore, the recommendation is to find the RIGHT dealer(s) as your mentor(s). This is not an easy task.

If strictly investing, what should one buy? If history is any guide, the highest-grade item that is scarce should prove to be the best long-term investment. Buying fewer items that are already desirable is better than buying high-grade common material with the hope that it will become desirable.

Numismatics is an international hobby. As the world continues to become smaller, I believe more people will collect and invest in non-U.S. numismatic material. As I suggested above, I believe the best is yet to come.