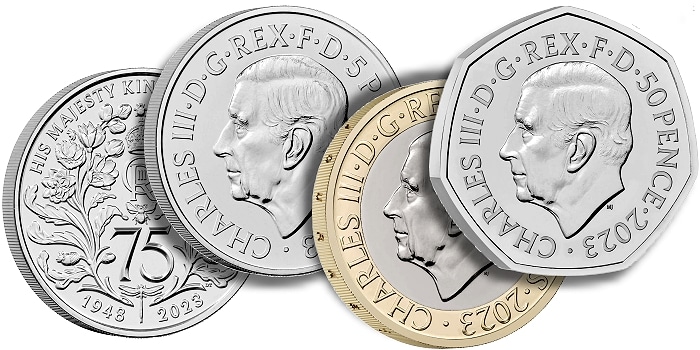 The Royal Mint has revealed the first commemorative coins for 2023 to bear His Majesty The King’s official coinage portrait. The release is the first chance for collectors to own a set of 2023-dated coins that feature the portrait of King Charles III. The Royal Mint unveiled His Majesty’s portrait in September 2022, as part of the Queen Elizabeth II memorial coin range and all new coins struck from January 1 2023 will now bear King Charles III portrait.

The unveiling of this collection of coins symbolizes one of the biggest changes to UK coins since decimalization. Collectors will see UK coins begin their transition from Britain’s longest reigning monarch, Queen Elizabeth II’s portrait, to King Charles III’s – which will now appear on all UK coinage moving forward.

“The Royal Mint has an official duty to strike the coins of UK monarchs and has been responsible for doing so since the reign of Alfred the Great. We were the first Mint to reveal the effigy of King Charles III in September 2022 and as Deputy Master of the Mint, I am honored to unveil the first collection of 2023 coins featuring the effigy of King Charles III as we cement our role in history with this next chapter in British coinage. Our role as an exemplar of British craftsmanship means each coin bearing his portrait is of the highest quality, from the metal it’s struck on, to the hours of craft that’s gone into the design, the tooling, and the final product for our customers.

“As the official maker of UK coins, The Royal Mint has been proud to strike every single UK coin for Her Late Majesty Queen Elizabeth II for 70 years. As we enter the New Year, we will start to see one of the biggest changes to UK coins for decades take place as King Charles III’s portrait begins to appear on all new UK coins.”

The Royal Mint’s Annual Sets celebrate key events and anniversaries throughout the year, bringing milestones to life on a £5, a £2, or a 50p coin. The 2023 Annual Set will include coins celebrating and commemorating:

Rebecca Morgan, Divisional Director of the Collector Services at The Royal Mint said:

“Each year The Royal Mint reveals a collection of coins, known as the Annual Set, which features a range of designs that appear on £5, £2 and 50p coins marking some of the year’s most significant moments and anniversaries. This year is particularly special for The Royal Mint, as we unveil the first coins of 2023 bearing His Majesty King Charles III’s official coin portrait, which also includes a commemorative £5 coin to celebrate His Majesty’s 75th birthday. The Annual Set provides members of the public with an opportunity to collect the very first coins of 2023 with The King’s portrait and mark this historic transition in monarchy on coins.”

The 75th Birthday of His Majesty King Charles III £5

In 2023, King Charles III will celebrate his 75th birthday. The Royal Mint pay tribute to a monarch who has already spent his life dedicated to a variety of good causes, as he sets out on a new journey where he has promised his ‘lifelong service’ to the people of the United Kingdom and the Commonwealth. His Majesty’s love of nature and plants is captured within the design of this commemorative £5, where the crown, The King’s cypher, and the number 75 is framed within oak leaves and delphiniums. The precious metal editions of the coin will also bear an edge inscription that says ‘RESTORING HARMONY WITH NATURE’.

Celebrating the Life and Work of JRR Tolkien £2

As the maker of Middle-earth, the father of modern fantasy fiction, and an accomplished scholar and philologist, JRR Tolkien is best known for creating the seminal fantasy novel The Hobbit in 1937 and the immensely popular The Lord of the Rings in 1954–55. In honor of Tolkien’s intellect and imagination, this £2 coin features Tolkien’s unique monogram encircled by a skilfully designed runic band. ‘NOT ALL THOSE WHO WANDER ARE LOST’, a quote taken from the poem, ‘The Riddle of Strider,’ which features in Tolkien’s The Fellowship of the Ring, serves as the coin’s edge inscription.

Celebrating the Centenary of Flying Scotsman £2

Earning its name from the daily 10.00 am London to Edinburgh rail service, the Flying Scotsman’s 100-year journey has seen it break railway records, gain worldwide fame, and become an enduring symbol of the great age of steam. As the Flying Scotsman celebrates its centenary in 2023, The Royal Mint has produced a £2 coin to celebrate the oldest working locomotive still operating on the UK’s mainline railways. The coin will also bear a fitting edge inscription, ‘LIVE FOR THE JOURNEY’.

Established in 1948 with the aim of providing care, based on need, and free at the point of use, the National Health Service (NHS) has been a vital component of British society since its creation. Celebrating 75 years of care, compassion, and devotion, this commemorative UK 50p coin features a reverse design that incorporates words that reflect our universal appreciation of the NHS.

75 Years of the Windrush Generation 50p

On June 21, 1948, a ship called HMT Empire Windrush docked at Tilbury, in Essex, having arrived from Jamaica. The ship has become symbolic of its passengers and their subsequent generations who have played a pivotal role in shaping the United Kingdom since the Second World War. This 50p coin commemorates 75 years since the ship’s arrival and features a design by the artist Valda Jackson, whose parents came to Britain from the Caribbean, which depicts two of the ship’s passengers set against a backdrop of the Union flag.

The 2023 commemorative sets are available in a range of precious metal and base Proof finishes as of January 3 at The Royal Mint website, with prices starting from £50. Each of the coins will be available individually in 2023.