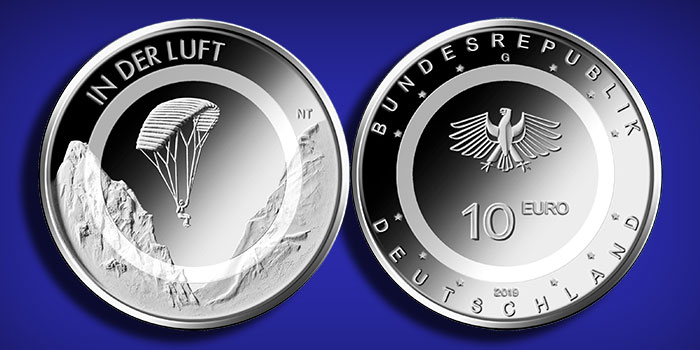 In addition to the five-euro coins with a polymer ring, machines from the Schuler Group will now also be used to produce similar 10-euro coins.

Wednesday, November 11 marked the start of production for a new 10 euro collector’s coin featuring a colorless polymer ring at the Karlsruhe mint of the State Mints of Baden-Wuerttemberg. The first coins were officially struck in a ceremony attended by Baden-Wuerttemberg’s Finance Minister, Edith Sitzmann. These “tri-material” coins are produced on a joining machine, which connects the polymer ring to the metallic core and outer metallic ring, and on minting presses from the Schuler Group.

The front face shows a paraglider set in a mountainous landscape, while the back face includes an eagle, an inscription reading “Bundesrepublik Deutschland” (Federal Republic of Germany), and the 12 stars of Europe. The design on the obverse was created by Natalie Tekampe from Müncheberg, Germany. The reverse was designed by Andre Witting out of Berlin. The 9.7-gram coin is the first issue of what is to be a three-part series entitled “Air Moves.” It will be available in the two mint qualities “uncirculated” and “proof” starting in the spring of 2019.

Autumn of the coming year will then see the arrival of the next edition of the five euro collector’s coin. This issue, which will feature a green polymer ring, will also be produced using Schuler technology. The front face will depict a European hare representing the temperate latitudes in the “Climate Zones of the Earth” series. The coins are extremely popular among collectors and non-collectors alike.

Additional information will be available at the Technical Forum held on January 31, 2019 in Berlin before the official opening of the World Money Fair.

About the Schuler Group

Schuler is a global market leader in the field of forming technology. The company provides presses, automation solutions, dies, process expertise and service for the entire metalworking industry. Its customers include automobile manufacturers and automotive suppliers, as well as companies from the forging, household appliance, packaging, energy and electronics industries. Schuler is a leader in coin minting presses and implements system solutions for various high-tech industries. The company generated over one billion euros in sales in the 2017 fiscal year and has a presence in roughly 40 countries with approx. 6,600 employees. Schuler is majority-owned by the Austrian ANDRITZ Group.