Bishop of Rome, Vicar of Jesus Christ, Successor of the Prince of the Apostles, Supreme Pontiff of the Universal Church, Primate of Italy, Archbishop and Metropolitan of the Roman Province, Sovereign of the State of Vatican City, Servant of the Servants of God.

THE POPE’S resounding modern titles give little evidence of a history that was often problematic, scandalous and bloody. Out of 266 popes[1], 196 were Italian, mostly aristocrats from a traditional culture steeped in violence, revenge, and treachery. The human heart is a battleground between good and evil; although many popes were saintly men who led lives of heroic virtue, a few were basically mob bosses in priestly vestments.

E. R. Chamberlin’s popular history The Bad Popes (1969) singled out five of the worst medieval and Renaissance scoundrels. This article examines the numismatic legacy of these fascinating rogues.

Popes issued no coins at all between 983 and 1294. During this time, coins were struck at Rome in the name of the “Senate” – whatever warlord gang temporarily controlled the anarchic city. Circulating Italian coinage in the 13th century included the tiny denaro (or denier, about 0.5 grams in “billon”, a copper alloy with less than 50% silver) and the grosso (or gros, or groat, two or three grams of good silver worth 12 to 16 denari but often clipped). High-value transactions used the fiorino (“florin”) of Florence or the ducato (“ducat”) of Venice, standardized at 3.5 grams of nearly pure gold and widely imitated by other states. 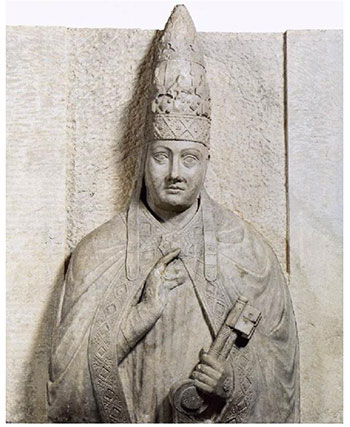 Benedetto Caetani was born about the year 1230 to an aristocratic family in Anagni, a hill town 57 km (36 miles) southeast of Rome. He studied law, rose rapidly through the church hierarchy, conducted sensitive diplomatic missions, and became a cardinal in 1281.

After Pope Nicholas IV died in 1292, cardinals bitterly divided into factions deadlocked for 27 months, unable to agree on a successor. Finally, in frustration, they elected an elderly hermit monk, Pietro de Morrone. Taking the name Celestine V, he proved utterly incapable of handling the job. Caetani drafted a formal resignation, assuring him it was legal (no previous pope had ever resigned[2]). Contemporaries suspected that Caetani persuaded Celestine to quit because he coveted the position for himself. Caetani was soon elected pope, taking the name Boniface VIII. The poet Dante Alighieri (1265-1321) placed both men in Hell in his Divine Comedy (1320)[3].

After attempting to escape back to his hermit life, Celestine was confined in a remote castle until he died. He told his successor, “You have entered like a fox, you will reign like a lion, and you will die like a dog.”

Boniface VIII had a gift for making enemies, including the king of France, Philip IV (reigned 1285 – 1314), and the Colonna family[4], barons who ruled much of the land around Rome. On September 7, 1303, a band of French mercenaries and Colonnas stormed the pope’s palace at Anagni and beat him up. Rescued by his supporters, Boniface never recovered from the shock and died in Rome a month later. He had reigned for eight years, nine months and 19 days.

The few coins of Boniface VIII were issued in Southern France where the Papacy controlled the town of Avignon. Two types are known: a silver grosso bearing a crude portrait of the pope[5] and a billon denaro. Papal seals of Boniface VIII in lead, bearing facing heads of St. Paul and St. Peter, are relatively common; an example brought $299 USD in a recent auction[6]. Bartolomeo Prignano was born in poverty about 1318 near Naples. A competent, conscientious bureaucrat, he rose through the hierarchy and became acting vice-chancellor (chief financial officer of the Church). When Gregory XI (the seventh French pope in a row) died on 27 March 1378, an angry crowd demanded the election of a Roman – or at least an Italian. The frightened cardinals settled on Prignano as a compromise and he became Pope Urban VI.

Sudden elevation to power seems to have unhinged his mind, and he is remembered as the “Mad Pope”. He made four of his nephews into cardinals. When several cardinals conspired to declare his election invalid (because it was made under threat of mob violence), he had them arrested, tortured, and eventually executed. He reportedly complained to the jailors that their screams were not loud enough. In desperation, the surviving French cardinals elected Robert of Geneva as “antipope”[7] Clement VII (reigned at Avignon 1378-1394).

The resulting “Great Schism”[8] in the Church lasted until 1417, with two or even three competing claimants to the chair of St. Peter.

While campaigning against his enemies, Urban VI fell from his mule. He died, probably of his injuries, at Rome on October 15, 1389–although the prevailing climate of paranoia caused suspicion of poison.

Urban’s coinage is scarce: Avignon issued a half-grosso and denaro, but the only example to appear in a recent auction is a denaro[9] struck at Viterbo (80 km or 50 miles north of Rome). Rodrigo Borja (or Borgia) was born January 1, 1431 at Xativa near Valencia, Spain[10]. His uncle, Pope Callixtus III (Alfonso Borgia, reigned 1455-1458), made Rodrigo a cardinal at the age of 25 (1456). As vice-chancellor of the Church, he became very rich and fathered four children with his mistress, Vanozza dei Cattanei[11]. Distributing lavish bribes and extravagant promises (which he later mostly ignored) among the cardinals, he was elected Pope Alexander VI on August 11, 1492.

The evil reputation of the Borgias is partly mythical, promoted by political enemies who came to power subsequently. A prime example is the “Banquet of Chestnuts”, supposedly staged by Alexander’s son Cesare in 1501:

On the evening of the last day of October 1501, Cesare Borgia arranged a banquet in his chambers in the Vatican with “fifty honest prostitutes”, called courtesans, who danced after dinner with the attendants and others who were present, at first in their garments, then naked. After dinner, the candelabra with the burning candles were taken from the tables and placed on the floor, and chestnuts were strewn around, which the naked courtesans picked up, creeping on hands and knees between the chandeliers, while the Pope, Cesare, and his sister Lucretia looked on. Finally, prizes were announced for those who could perform the act most often with the courtesans…[12]

The coinage of Alexander VI includes at least 25 types struck at seven different mints. The obverse of his gold ducats typically bear the Borgia family coat of arms, topped by the papal crossed keys; the reverse is a figure of Saint Peter[13]. On the silver grosso, the reverse often depicts Saints Peter and Paul[14]. Alexander rarely placed his own image on coins, but there are handsome contemporary portrait medallions. Born December 11, 1475 in Florence, he was the second son of Lorenzo “The Magnificent” de’ Medici one of the key personalities of the Renaissance. His mother Clarice Orsini came from a powerful elite Roman family[15]. Tutored by leading Italian scholars, he became a cardinal at the age of 13 in 1489 (but was not allowed to vote until he was 17). Elected pope at the age of 37, he took the name Leo X and reigned for almost nine turbulent years (eight years, eight months, and 22 days). He probably died from malaria, which was then endemic at Rome, but there was the usual suspicion of poison.

It was Leo’s misfortune to be pope when a German monk named Martin Luther launched the Protestant Reformation in October 1517.

“As a Renaissance prince he would have been superb, as pope he was a disaster. In seven years he is estimated to have spent some 5 million ducats, and at his death he was over 800,000 ducats in debt (Norwich, 295).”

Leo’s vast coinage includes over 100 types struck at 13 different mints. A magnificent gold 2.5 ducat[16] piece bears Leo’s portrait on the obverse and the Three Magi on horseback on the reverse. Formerly in the Eric P. Newman collection, it brought $37,500 in a 2014 auction. A rare silver giulio shows the proposed design for the reconstruction of St. Peter’s Basilica, with tall flanking bell towers that were never built. On the reverse, a kneeling figure of Leo offers a model of the church to St. Peter[17]. Giulio di Giuliano de Medici was born in Florence, 26 May 1478, son of the young Giuliano de Medici (1453-1478), who was murdered in the cathedral by political enemies a month before Giulio’s birth. A cousin of Pope Leo X, Giulio became a cardinal in 1513 (age 35) and vice-chancellor of the Church. Some historians believe he was the father of Alessandro di Medici, called “il Moro” (“the Moor”), born to a servant woman of African descent in 1510[18].

Clement’s disastrous papacy saw the Sack of Rome (May 6-9, 1527)[19] by 20,000 mutinous troops of Emperor Charles V, who had invaded Italy to fight an alliance of France, Milan, Venice, Florence, and the Papacy. An estimated 45,000 civilians were killed, injured or driven into exile. Taken prisoner, Clement paid a ransom of 400,000 ducats in exchange for his life. He grew a beard in mourning, setting a fashion followed by 24 succeeding popes, despite Church tradition requiring priests to be clean-shaven.

“[H]e was rather morose and disagreeable, reputed to be avaricious, by no means trustworthy, and naturally disinclined to do a kindness (Chamberlin, 258).”

Clement’s coinage includes about 78 types struck at nine different mints. A gold double florin bears the Medici arms[20], topped by the papal tiara and crossed keys. On the reverse, St. Peter in a boat draws in his fishing net. The artist and writer Benvenuto Cellini (1500 – 1571), who served as Clement’s mintmaster, engraved the dies for a magnificent silver double carlino[21], with the pope’s bearded portrait on the obverse. On the dramatic reverse, Christ lifts St. Peter from the sea, surrounded by the Latin inscription, Quare Dubitasti (“Wherefore did you doubt?”[22]).

Perhaps the most famous coin of Clement’s reign (10 years, 10 months, seven days) was a silver quarter ducat for the 1525 “Jubilee Year”, with a Nativity scene on the obverse and the ceremonial opening of the Holy Door on the reverse[23].

Modern Papal coinage of Vatican City is popular with collectors, but the scarce medieval and Renaissance coins are a specialized interest. They mainly appear in Italian auctions; many surviving examples are pierced for wear as religious amulets. Papal medallions (usually bronze but occasionally silver)–which never circulated as money, and often bear highly artistic portraits and pictorial reverse designs–are avidly collected, as are bullae, the lead seals used to validate the Church’s massive output of official documents.

The standard reference in Italian is Muntoni (1996). Used copies of this massive four-volume work sell for about $300. In English, the essential handbook for collectors is Berman (1991).

[1] Many successions to the Papacy were disputed; see https://en.wikipedia.org/wiki/List_of_popes.

[2] Celestine V was the only pope to resign until Benedict XVI in 2013.

[3] An accessible and well-annotated English verse translation by John Ciardi is online at https://archive.org/stream/inferno00dant_2/inferno00dant_2_djvu.txt.

[7] The Church does not recognize antipopes. Confusingly, they often took the same names as legitimate popes: https://en.wikipedia.org/wiki/Antipope.

[10] In the TV series The Borgias, actor Jeremy Irons plays the role of Rodrigo.

[11] He fathered at least five other children “with unknown women.”