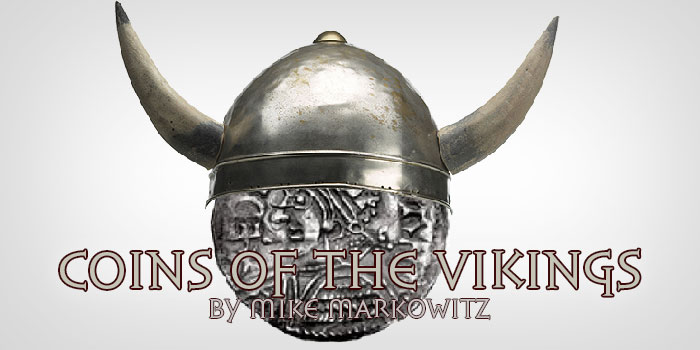 ON JUNE 8, 793, A BAND of Norse raiders sacked Lindisfarne, a monastery on the Holy Island off the northeast coast of England. Historians date this as the beginning of the Viking Age. And over the next three centuries, these fierce Scandinavian warriors shaped much of European history.

Initially, the Vikings used “hacksilver” as money – broken jewelry, cut up coins and ingots traded by weight. They amassed great hoards of Islamic dirhems, European deniers and Anglo-Saxon pennies, pillaged, gained as tribute, or obtained in trade. When they began striking coins for the kingdoms they carved out with their swords, Viking designs fused their vigorous pagan art with the Christian iconography they gradually adopted. And over time, the Norse began to develop national identities as the Danes, Swedes and Norwegians we know today.

Some of the earliest Viking coins are anonymous silver pennies from Hedeby (or Haithabu) a trading post in southern Denmark (Varenius, 185-193). These include the only Viking coins depicting ships–surprising, considering the importance of these graceful, superbly crafted wooden vessels in Norse culture. The ship coins are so rare that the only published examples are in museums. None have appeared in recent auctions, although a variety of replicas can be found online. A broken silver penny of Hedeby (c. 870–900), bearing an abstract face on one side and a horse on the other, went for over $4,700 USD in a 2015 German auction[1].

According to legend, Harald Bluetooth (Danish Blåtand) was so fond of blueberries that they stained his teeth[2]. Actually, he had a dead tooth that appeared blue. Son of Gorm the Old, Harald ruled as king of Denmark c. 958-986, promoting the conversion of the Danes to Christianity. He also briefly ruled Norway. His coinage imitates Carolingian deniers of Dorestad, a river port in the Netherlands that dominated local trade in the eighth and ninth centuries. The coins are “half-bracteates” – very thin and lightweight (0.29 gram) bits of silver foil[3]. The design of four columns and two arches suggests a building of some kind.

On 1 November 866, a Viking army led by Ivar the Boneless[4] captured the town of York in northern England. Vikings renamed it Jorvik, establishing a kingdom that lasted until 954, although the town changed hands repeatedly.

A king at York named Cnut, known only from his coins (c. 900-905), struck silver pennies bearing an unusual inverted patriarchal cross[5] (a cross with two cross-bars, one larger than the other). The reverse inscription, CUN •NET • TI, remains unexplained. Some 3000 of these were in the huge Cuerdale hoard, discovered in 1840 (Ghey, 89).

A series of “Hiberno-Norse” rulers (Vikings who had settled in Ireland) issued some remarkable coins at York. The rare penny of Sihtric II (ruled 921- 927) bore a sword on the obverse, and an image of Mjölnir[6], hammer of the Norse god Thor, on the reverse[7]. The garbled inscription indicates that the artisans who engraved the dies were illiterate.

In Norse mythology, a pair of ravens–Huginn and Muninn–serve as companions to the god Odin[8]. The raven is a common motif in Viking art. Anlaf Gufrithsson, a Hiberno-Norse warlord who briefly (939-941) ruled York issued a rare silver penny with a raven on the obverse and a small cross on the reverse.

“[O]n the obverse we find a raven with outstretched wings, a classic Viking symbol, which could, according to Blackburn, also serve in a “Christian context: the raven is associated with Saint Oswald (a Northumbrian royal saint)…[W]e can speculate whether the designers were subtly appealing to a dual audience.”[9]

“…a renowned warrior and a ruthless pillager of churches”[10], Anlaf Sithtricsson (better known by his Irish name Amlaib Cuaran) was another Hiberno-Norse warlord who briefly ruled York (941-944). His very rare silver penny[11] bears the ancient “triquetra”[12] symbol on the obverse and a fringed, triangular “Raven” banner on the reverse. Common in Celtic pagan art, the triquetra was adopted by early Irish Christians as a symbol of the Trinity.

The figure that Eric became in the Norse sagas is a heady mix of history, folklore, and political propaganda… The Heimskringla describes Eric as “a large and handsome man, strong and of great prowess, a great and victorious warrior,” but also “violent of disposition, cruel, gruff, and taciturn.”[13]

Born about 990, Cnut Sweynsson was the son of Sweyn Forkbeard and a grandson of Harald Bluetooth. In British history, he is known as “Canute the Great”. As king of Denmark, Norway and England, he ruled the short-lived “North Sea Empire”. To pay his troops, he issued abundant coinage from numerous mints, including London. On early issues, his crowned portrait appears within a “quatrefoil” (a four-lobed border)[16]. On later issues he appears with a conical helmet, or a simple headband. The reverse is invariably a cross, surrounded by the name of the moneyer and the mint.

Born about 980, Olof Skotknung (“Olof the Treasurer”) was king of Sweden from 995 to 1022. His father was Eric the Victorious and his mother was Sigrid the Haughty. The first Christian king of Sweden, he was baptized in 1008. His daughter Ingegerd married Yaroslav the Wise, Grand Prince of Kiev and was later canonized as an Orthodox saint. Olof issued coins at his capital, Sigtuna, on Lake Mälaren near Stockholm. Many of these coins imitate Anglo-Saxon silver pennies of Aethelred II[17], some crudely struck on square blanks. Early coins in Olof’s own name identify him as “King in Sigtuna”; later issues are inscribed “King of the Swedes”.

The last Scandinavian to rule in England (1040-1042), Harthacnut (or Hardeknud) son of Canute the Great, was king of Denmark from 1035 to 1042. Most of his coins bear his portrait–usually holding a scepter–but a remarkable silver penny[18] from the mint of Lund in Denmark has a spiral serpent on the obverse. This is probably an image of Jörmundgandr[19], the world-encircling sea monster of Norse mythology. An ornate cross reverse, suggests a co-existence of Christian and pagan ideas.

Born about 1019 in England, Sven Estridsson ruled Denmark from 1047 until his death in 1076. Married three times, he fathered over 20 children, including five future kings. Harthacnut was his cousin. His reign was troubled by a long conflict with Harald Hardrada, the king of Norway who was slain in 1066 during a failed attempt to seize the English throne. Sven’s silver pennies[20] crudely copy designs from contemporary Byzantine gold coins, including Christ enthroned, and a standing figure of the king beside the Archangel Michael[21]. These magnificent coins were familiar to the Norse elite because Viking warriors served as imperial guards in Constantinople.

Known as “Olav the Peaceful”, Olav III Haraldsson Kyrre ruled Norway from 1067 to 1093. The son of King Harald Hardrada, he had returned to Norway with an immense treasure he accumulated in the Varangian Guard, the mercenary force serving Byzantine emperors. About half copper, Olav’s “silver” pennies are known mainly from a single hoard of 2,000 coins found in 1878. The obverse is a stylized dragon’s head, possibly the ornamental crest of a helmet. The reverse bears a cross, with the moneyer’s runic inscription “Gunnar owns this die”[22].

In 1957, an amateur archaeologist found a worn and pierced example of this type at Naskeag Point on the coast of Maine, 775 miles (1,246 km) southwest of the Viking outpost in Newfoundland. A recent survey of the evidence by a Norwegian numismatist rejects arguments that this find was a hoax (Gullbekk, 6).

Leif Erikson was born c. 970 in Iceland. His father, Erik the Red, established the first Norse settlement in Greenland in 986. Surprisingly, no Viking coins have been found in Greenland, although a few have turned up in Iceland. Around the year 1000, Leif led a Viking band that established the aforementioned and short-lived outpost in Newfoundland, becoming the first Europeans (probably) to set foot in North America.

In 1925, the United States Mint issued a medal[23] commemorating the 100th anniversary of the arrival of he first Norwegian immigrants in the United States. Designed by James Earle Fraser (who designed the Buffalo nickel) the octagonal medal depicts Leif wearing the historically inaccurate horned helmet (a romantic fantasy of 19th-century operatic costume designers). In 2000, to mark the 1,000th anniversary of Leif’s expedition, the US Mint issued a commemorative silver dollar with an accurate Viking helmet but inscribed “Founder of the New World”; an extravagant boast, considering the millions of Native Americans who already lived there.

[2] The Bluetooth wireless standard was named in his honor, in the hope that it would “unite devices the way Harald Bluetooth united the tribes of Denmark into a single kingdom”: https://en.wikipedia.org/wiki/Harald_Bluetooth