Coins are the most abundant relics of the Second Punic War

One of the most interesting and most challenging themes in the world of ancient coins is the Second Punic War, a monumental conflict in which Romans and Carthaginians battled each other for nearly two decades. At stake was supremacy over the Western Mediterranean. After its hard-won victory over Carthage in 201 BCE, Rome had established its regional authority beyond question.

The war was so financially demanding that the Romans struck gold coins for the first time in their long history. Shown above is a gold 60-asses piece portraying the Roman war god Mars and an eagle standing on a thunderbolt, emblematic of the supreme Roman god Jupiter.

Some of the most sought-after items of this war are Carthaginian silver coins struck for use in Sicily. Shown below is an example of that coinage, a half-shekel of c.213-211 BCE, portraying on its obverse the head of the Punic god Melkart and on its reverse a rushing elephant. The latter presumably is a reflection of the elephants that the Carthaginian general Hannibal brought with him for use in battle against the Romans. Many scholars have speculated whether or not the head of Melkart might bear the facial features of Hannibal.

Carthaginian Half Shekel silver coin, featuring Melqart on obverse and elephant on reverse

The Second Punic War formally began when the Carthaginian general Hannibal and his army crossed the Alps in November of 218 BCE and descended into Northern Italy. Though this war began in the North, it was fought principally in the southern part of the Italian peninsula. Battles raged on Italian soil for nearly 15 years until Hannibal and what remained of his army sailed for North Africa in the summer or fall of 203 BCE.

Carthaginian coinages for this war were issued in debased gold (electrum), silver, debased silver (billon) and copper. They were struck in a wide variety of locations including North Africa, Spain, South Italy, Sicily and Sardinia. Shown below is a typical example of what would have been a low-value coin issued by the Carthaginians in the early stages of the war. It shows the goddess Tanit and a horse standing beside a palm tree.

Also of great interest and variety are the ‘local coins’ of the cities in South Italy. Every city in the region had to choose sides between Rome and Carthage. This was perilous and almost always had serious consequences. Sometimes cities switched hands more than twice due to shifting loyalties and the fortunes of war. Shown below is a copper coin of Brundisium, a city that remained loyal to Rome throughout the war. Struck in about 215 BCE, it shows the sea-god Neptune and a youth riding a dolphin.

Roman coinage underwent great change during the war. In addition to having issued its first gold coins, the Romans greatly increased – and constantly modified – their output of silver and bronze coins. The principal silver coin of the early years of the war was the ‘quadrigatus’ didrachm, which paired a janiform head, perhaps of the Dioscuri, with a quadriga (a four-horse chariot) bearing the figures of Jupiter and Victory. Shown below is an example of particularly fine style and nice toning.

Seemingly in 212 or 211 BCE, the ‘quadrigatus’ was replaced with a new, lighter coin called the denarius. This innovative coin would stand the test of time as the main Roman silver coin of the next 450 years. The earliest denarii (an example below) show on their obverse the helmeted head of the goddess Roma and on their reverse the Dioscuri couching lances as they ride their horses. 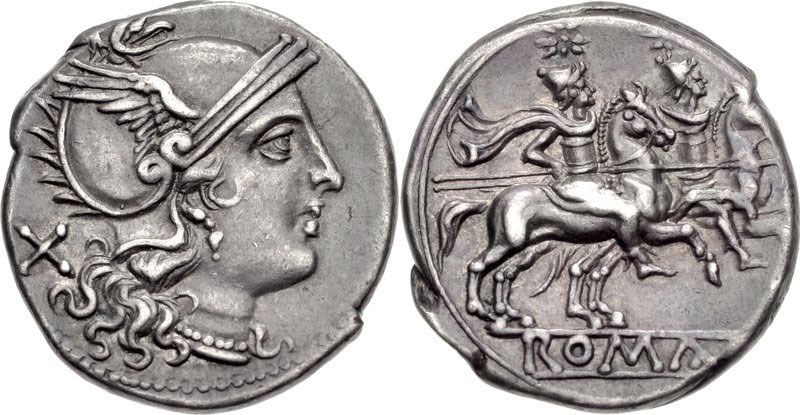 An early silver denarius of Rome

Roman bronze also underwent much change in the war years. Weight was reduced drastically, and rather than being produced only at Rome bronzes were issued at a number of mints. Perhaps even more importantly, by the time the war was over the traditional process of casting bronzes had been abandoned in favor of striking with dies. One struck Roman bronze of the war is the ‘As’ shown below, issued soon after 211 BCE. It shows the double-faced head of Janus and the prow of a war galley.

After Hannibal’s army sailed from Italy late in 203 BCE, the focus of the war shifted to North Africa. The Romans followed, landing armies and devoting themselves to defeating Hannibal and the government in Carthage. In a series of engagements, culminating in the Battle of Zama in 202, the Roman general Scipio Africanus defeated Hannibal and his other commanders. Peace terms were negotiated in 201, after which the war officially came to a close.

Shown above is a silver denarius bearing a portrait that many consider to be that of the victorious Scipio Africanus. It was struck c.112-111 BCE, about 90 years after Scipio’s victory over Hannibal and the subsequent peace negotiations with Carthage. The reverse shows the Capitoline Triad, being the Roman divinities Jupiter, Juno and Minerva.