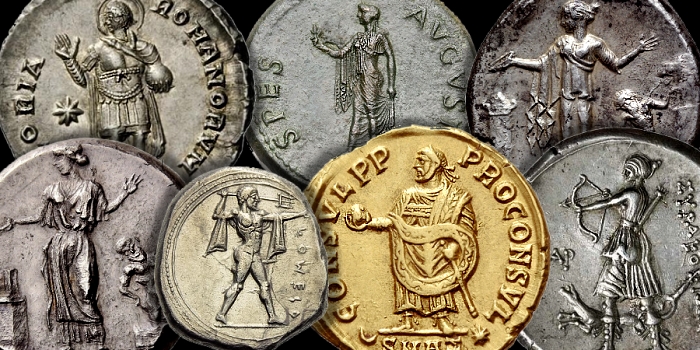 And if any man will sue thee at law and take away thy coat [Greek: chiton; Latin: tunica], let him have thy cloak [Greek: himation; Latin: pallium] also.

LIVING IN A WORLD of cheap, machine-made textiles, it is easy for us to forget that every bit of thread–every scrap of cloth–in the ancient world was spun and sewn by hand. Clothing therefore was scarce and costly for most Greeks and Romans. What we wear today is typically sewn and buttoned or zipped. Most ancient garments, in contrast, were simply draped, wrapped, and pinned. Wool and linen were the main fabrics; cotton was an exotic import from India and silk was an expensive luxury brought all the way from China[2].

Clothes carried a range of social and cultural meanings that are expressed by the garments we see on ancient coins. Coin auction catalogues and reference books describe these garments with a Greek and Latin vocabulary that can be baffling for beginners. Only a handful of actual garments survive from classical antiquity (mostly from Roman Egypt), so to understand ancient dress we rely on evidence from art history and literature. Coins cannot tell us the colors or patterns of ancient textiles; for that we rely on wall paintings, mosaics and ceramics.

But the best ancient coin engravers did have a good eye for drapery. The chiton (or kiton) was a loose, usually sleeveless ankle-length garment stitched from two rectangles of linen (front and back). It was belted at the waist (for men) or below the breasts (for women). A silver stater of Aspendus (c. 420-370 BCE) in Anatolia shows a slinger wearing an elegantly pleated short chiton that has the look of sheer Egyptian linen[3]. On the reverse of a silver 12 litrae piece of Syracuse (c. 212-214 BCE), Artemis, the Greek goddess of hunting, draws her bow wearing a long chiton and high tasseled boots[4].

The peplos (or peplum) was a typically female garment, often worn over a chiton. It was a long, tubular cloth with the top edge folded down about halfway, so that what was the top of the tube was now draped below the waist, and the bottom of the tube was at the ankle. The garment was then gathered about the waist and the folded top edge pinned over the shoulders[5].

A famous bronze statue called the Peplophoros (“peplos-wearer”) shows a young woman fastening her peplos[6]. A Roman copy of a Greek original, it was found in the Villa dei Papiri at Herculaneum. The peplos was the costume of the goddess Athena. A periodic festival at Athens involved a procession bearing a richly embroidered new peplos, woven by elite women of the city, to adorn the statue of the goddess (Hǻland, 156).

A unique silver tetradrachm of Andragoras, who led a rebellion against the Seleucid empire (c. 246 – 230 BCE) shows Athena’s peplos worn over a long chiton[7]. Himera, a Greek city on the north coast of Sicily, destroyed by the Carthaginians in 409 BCE, depicted its namesake, the nymph Himera, wearing an unusual V-neck peplos on its silver tetradrachm[8]. The chlamys was a short seamless cloak with a rounded outer edge thrown over the back and pinned at the right shoulder with a fibula ( brooch or “safety pin”)[9]. In warm weather, it might simply be draped over the arms, as seen with the striding naked figure of the god Poseidon on staters of Poseidonia (c. 445-420 BCE)[10]. In warm weather, men might wear the chlamys loosely as the only garment. It could also be wrapped around the forearm to use as an improvised shield in combat. 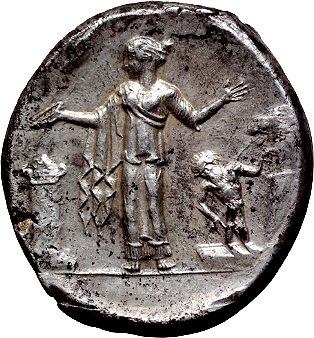 The himation (translated in the King James Version of The Bible as “cloak”) was the standard ancient Greek outer garment for both sexes. On another tetradrachm of Himera, the nymph’s himation, draped over her right shoulder, hangs in decorative zig-zag folds[11]. On a silver tetradrachm of Mausolus (ruled 377-353 BCE, the Carian ruler whose magnificent tomb gives us the word “mausoleum”), the god Zeus wears a himation over a long pleated chiton[12]. A corner of the himation is weighted with a prominent metal ring, to make it hang straight.

As the iconic garment of Roman citizens, the toga was frequently depicted in sculpture, painting and on coins. Modern party-goers will be disappointed to learn that a bed-sheet is a very poor approximation. The length of a toga was about three times the height of the wearer, and the width was about double the wearer’s height. One edge formed a long semi-circular curve, and small weights might be sewn into the hem to make the garment hang straight. Even when it was woven from the finest lamb’s wool, a toga was heavy, bulky and remarkably unsuitable for Italy’s warm climate. Folded, draped and wrapped in a complicated fashion that changed over time, the toga stayed on without any buttons or fasteners. By the imperial era, putting it on properly usually required the assistance of a trained slave. One deep fold, called the sinus, provided a convenient pocket for carrying a scroll, or concealing a dagger.

On a denarius of Marcus Aurelius, the figure of Honos (the personification of honor) wears a simple toga, while holding out a branch and cradling a cornucopia[13]. When performing a sacrifice or religious ritual, a fold of the toga was drawn over the head (“capite velato”) as seen on the reverse of a sestertius of Septimius Severus, where the emperor and his sons stand over an altar[14]. An elaborately embroidered toga was worn for the ceremonial proclamation of the emperor as consul for the year, as seen on the reverse of an aureus of Constantine I issued at Antioch c. 310-311[15]. 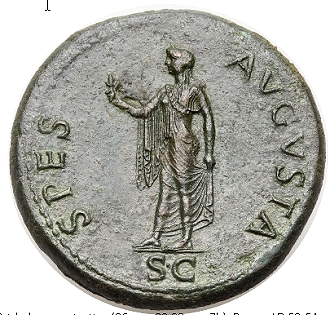 The stola was the primary garment of elite Roman women (by the imperial era, the only women required to wear the toga were prostitutes, a law that has baffled generations of classicists). The Statue of Liberty wears a long stola beneath a cloak (palla) pinned at the left shoulder (leaving her right arm free to raise the torch). The reverse of a superb sestertius of Claudius depicts Spes, the personification of hope, wearing a long, sheer, elaborately pleated stola that reveals the contours of her figure beneath the fabric. Spes always holds a flower, while lifting the hem of her garment so it will not drag in the dirt[16]. The knee-length Roman tunica was essentially the same garment as the Greek chiton[17]. Sleeveless, or short-sleeved, it might be worn under the toga, and by itself was the typical working costume of soldiers and laborers. The reverse of a bronze as of Claudius (c. 42-43 CE) shows Constantia (the personification of constancy) wearing a long cloak over a short, form-fitting tunica[18]. On a gold aureus of Galba (68-69 CE), Roma Victrix, the female personification of victorious Rome, wears a tunica while placing a booted foot on a globe, symbolizing world conquest[19].

The paludamentum or sagum was a heavy military cloak of oily raw wool, so that it was nearly waterproof. It was also typically dyed red. From the fourth century onward, Roman emperors were usually depicted on coins in full military attire, even those who never took the field or left the relative safety of the palace. A fine example is the silver miliarense of the very unwarlike Theodosius II struck at Constantinople (c. 408-420). The emperor stands holding the orb that symbolized his rule of the world. He wears a “muscle cuirass”[20], a style of metal armor (or hardened leather) molded in the shape of a muscular torso, secured by a knotted cord. Around his waist, a skirt of pteruges (overlapping “feathers” of leather reinforced with metal studs) protects the thighs[21]. The knee-length paludamentum, fastened at the neck, is casually thrown off the left shoulder (something the engraver had trouble representing on this example.) Busts of the emperor on coins, or in sculpture, are commonly described as “draped and cuirassed”, meaning the cloak is worn over armor.