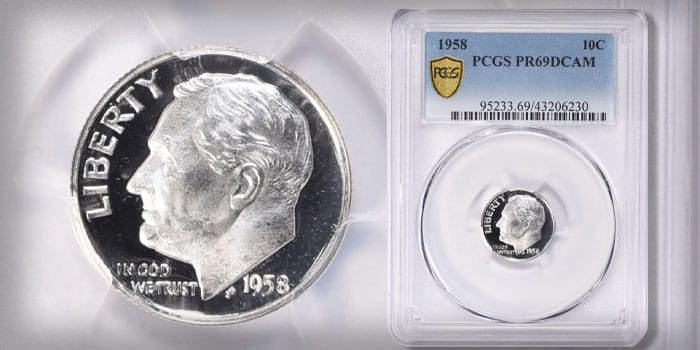 GreatCollections is offering collectors the opportunity to win a stunning 1958 Deep Cameo PR 69 Roosevelt Dime in their current online auction. Bidding on this fully lustrous coin ends Sunday, May 8, 2022, at 5:05 PM Pacific Time (8:05 PM Eastern). This rare coin is a must for any collector of modern dimes. At the time of publication, the highest of 29 bids stands at $2,551 USD, and with 10 days to go stands to shatter the auction record for all 1958 Roosevelt dimes struck at the Philadelphia Mint.

In order to create a Cameo Proof, first, the Mint either sandblasts or acid etches the entire die surface. This process creates a frosted matte appearance on the coin’s devices. Next, the die fields are heavily polished, which gives the coin’s fields a mirror-like finish. The difference between the Deep Cameo and a regular Cameo designation is the “degree of frosting present” on the devices (NGC, 2018). Since the dies are used for many coins, the roughened surfaces of the die will be slowly worn down over the piece’s life, which then results in a less dramatically frosted surface.

Because the mintage of these coins was tied to the number of Philadelphia Proof Sets sold, only 875,652 total Proof dimes in 1958 were struck. This mintage is down from down 1,247,952 in 1957. This mintage decrease represented the first decline in Proof Set sales by the US Mint since 1936.

Despite a low mintage of 875,652 Proof Roosevelt dimes struck in 1958, only a very few Ultra Cameo (NGC) or Deep Cameo (PCGS) proofs were produced and to find one in PF 65 or better is very uncommon. While PCGS CoinFacts estimates that there are only 8,000 Deep Cameo 1958 dimes in PR 65 or better. In fact, PCGS has only graded six examples in PR 69, while NGC has certified 16.

Like all current US coins except the Lincoln cent, the Roosevelt dime’s obverse design is dominated by a left-facing profile of the eponymous president. Located in the northwest quadrant, directly inside of the smooth rim, is the legend LIBERTY. Below the bust’s chin, in smaller letters is the second obverse legend, IN GOD WE TRUST. The date, 1958 is squeezed directly below the neck truncation and to the right of the initials “JS” of US Mint Chief Engraver John R. Sinnock, the coin’s designer. When this coin was struck, the Philadelphia Mint was not using a mintmark.

Completely encircling the reverse design at the top are the words UNITED STATES OF AMERICA, and on the bottom in slightly larger words is the denomination ONE DIME. The flaming torch, which symbolizes liberty, is showcased as the central feature of this coin’s reverse design. The torch is flanked by an olive branch on the left and an oak branch on the right, which represent peace and victory, respectively. America’s traditional motto E PLURIBUS UNUM is split into four parts (E PLU / RIB / US U / NUM) by the branches and torch. Since the breaks are not between the Latin words, there are centering dots in each word break.