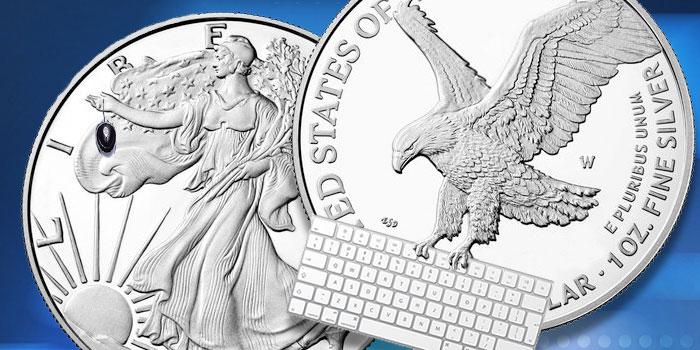 Are you ready for the next U.S. Mint sell-out?

Proof 2021-W American Silver Eagles (ASEs) with a new reverse design and enhanced security features will be available to the public on July 1 and will almost certainly sell out in minutes.

The release of the new coins comes soon after multiple blisteringly rapid product sellouts, and collector/public interest in the new design guarantees another. The new reverse is the second type of the perennially popular silver bullion coin; Type I was produced from 1986 to 2021.

Those wishing to buy a coin from the Mint will have to be both lucky and patient.

The last Proof Type I ASE, 2021-W, was released on February 11 and sold out within minutes. The Mint set the product limit at 327,440 coins yet no household order limit was imposed. At $73, the price for the Type I Proofs was the same as the upcoming Type II Proofs. About 10 minutes after the coins were put on sale, they were marked “currently unavailable”, indicating that the inventory had all sold.

On May 24, the Mint released the first two 2021-dated Morgan dollars, which featured privy marks imitating “O” and “CC” mint marks under the wreath on the release. 175,000 of each dollar were authorized to be struck. Priced at $85 each, the coins both had initial household ordering limits of 25 coins that were lowered to 10 after public backlash.

But despite the new ordering limits, the coins sold out in under half an hour.

The Mint’s website slowed to a crawl and many people were unable to place their orders. After both of these 2021 releases, angry collectors took to web forums and the comments sections on numismatic websites to express their frustration. The Mint offered guidance in advance of the release of the Morgan dollars, encouraging collectors to ensure that their payment information is up to date, though clearly this advice does not answer for the Mint’s inability to complete orders in process for some customers during the crush of orders at the launch of both programs.

Expect this problem to reoccur on July 1.

Plans for a redesign of the ASE date back years. In 2014, the Citizens Coinage Advisory Committee (CCAC) proposed a new reverse design, a flying eagle similar to the reverse of the 1836 Gobrecht dollar. The CCAC’s proposed design ultimately appeared on the reverse of the 2015-W $100 American Liberty gold coin.

The need for security features to deter and prevent counterfeiting was apparent by the mid-2000s. Reports of counterfeit ASEs sold online flooded collector forums and numismatic publications. In 2018, a survey conducted by the Anti-Counterfeiting Task Force (ACTF) found that the ASE was the “most counterfeited bullion coin,” with 43.3% of the U.S. dealers surveyed reporting that someone had tried to sell them counterfeit ASEs in the past year.

Then-Secretary of the Treasury Steve Mnuchin gave the green light for a redesign of the ASE in 2019, with an emphasis on adding security features.

Adolph Weinman’s Walking Liberty design remains on the obverse; the Mint’s listing for the 2021-W Type II says “Thanks to modern design technology, the updated obverse is a closer reflection of Weinman’s original vision and includes the addition of his traditional artist mark.” The mark “AW” appears in the lower-right field on the obverse.

The new design of the ASE was created by U.S. Mint Artistic Infusion Program artist Emily Damstra and depicts an eagle coming in for a landing clutching an oak branch. Mint Medallic Artist Michael Gaudioso sculpted it.

The new designs were unveiled in October 2020. Naturally, some expressed concerns about the design change undermining public confidence in the coins since former Mint Chief Engraver John Mercanti’s design had served for 35 years, while others were glad to see a more dynamic eagle.

The coins being released on July 1 were struck at the West Point Mint and bear the facility’s “W” mint mark. The 2021-W Type II ASEs will go on sale July 1, 2021, at noon EST. Each coin costs $73, with a household ordering limit of 25 coins.

For those trying to order this historic first issue of the Type II Silver Eagle, CoinWeek recommends that collectors make sure they have an online account with up-to-date payment information on file and be logged in before noon on July 1. Expect the site’s performance to be slow and refresh the page multiple times to successfully complete your transaction. Still, know that your order might not go through.

Collectors intent on adding the coins to their sets should be ready to pay more than the issue price on the secondary market; the coins will surely begin appearing in online auctions almost immediately after the near-inevitable rapid sellout. However, coins may become available later directly from the Mint as a result of canceled orders or payment issues.

The release of the remaining 2021 Morgan and Peace dollars was delayed as a result of their lightning-fast sellout, but as of the time of this writing, the sale of the Proof 2021-W Type II ASE is still on.