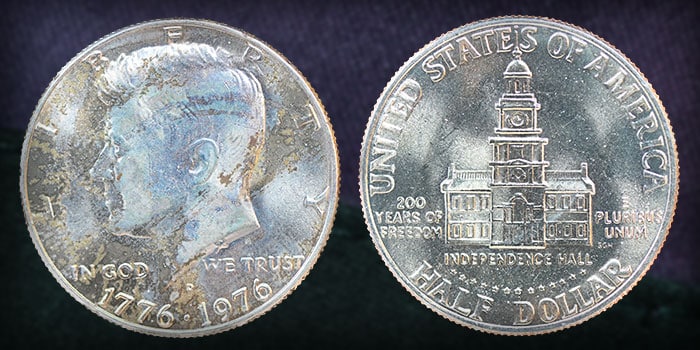 First released on July 7, 1975, the Kennedy half dollar became the first United States Bicentennial design to reach public hands. So popular were these coins that demand, both global and domestic, quickly outstripped previous years.

By September 1975, the United States Mint had shifted from only selling Uncirculated Sets directly to the public. A secondary program, which saw the Mint sell sets to private banks for secondary resale, accounted for 2.2 million of the over four million total sets sold. A year later, on September 9, 1976, Mint Director Mary Brooks announced that the Secretary of the Treasury William E. Simon ordered the discontinuance of the Bicentennial designs and the resumption of the standard eagle reverse for all denominations for 1977. To help move the remaining product, Brooks advised all interested collectors to either place orders directly with the Mint or from a local bank.

The 1976-D Bicentennial Kennedy Half in Today’s Market

Many collectors pulled these coins from circulation when they were released, so examples can still be found at face value in Mint State. The majority of examples pulled from circulation, however, will be in circulated grades of Extra Fine to About Uncirculated. In the event that uneven distribution of the coins resulted in a stock of Bicentennial halves at a bank branch, you might get lucky and find some Choice or Gem uncirculated examples.

The coin is not typically found in Superb Gem, however.

Interestingly, where the most common grade for a modern US coin is usually MS 64, it is MS 65 for the clad 1776-1976-D Kennedy half dollar. This is most likely a byproduct of extensive early picking and a little concept CoinWeek calls the “Terminal Point“.

1976-D half dollars with unusual characteristics have sold for big premiums.

The auction record for this type is held by an error coin. Sold for $3,105 in 2004 by Heritage Auctions, this off-metal error was struck on a quarter planchet and is emblematic of error pricing for this type. Practically all examples that have sold for over $1,000 are error coins. However, coins graded MS 67 generally sell for between $775 and $1,000. Due to the massive dual-year mintage, these circulation strike coins are extremely common and only command a truly significant premium in that grade. The price plummets for MS 66s, where coins are generally worth between $35 and $65. Some examples have sold for as little as $11 or for as high as $150.

Drop one more grade to MS 65, and the price is nearly halved yet again. Examples in this grade have sold recently for between $25 and $30. It is important to note that while this is an increase over several years ago when they sold for $10 to $20, examples can still sell for as low as $1.

Continuing this trend with coins graded between MS 64 and MS 63, collectors can expect to purchase an example for $10 to $25. It is also quite easy to find pieces for as little as between $1 and $5. However, the premium can be quite substantial for toned or error coins, with nicely toned pieces selling for $100 to $200 and error pieces selling for thousands.

While in low-Mint State to high AU these coins are worth $1 to $2, in all lower grades they are only worth face value.

The obverse of the Kennedy half dollar was designed by Gilroy Roberts, who served as the ninth Chief Engraver of the United States Mint from July 22, 1948, to February 11, 1965. Roberts also designed President Kennedy’s inaugural medal, which served as the basis of the present design.

The central motif is an effigy of the 35th President of the United States, the late John Fitzgerald Kennedy. A war hero and (at the time) the youngest person ever elected president, Kennedy was inaugurated on January 20, 1961, and assassinated on November 22, 1963. The nation’s grief was such that Congress and the Mint rushed through a design change on the half-dollar denomination to commemorate the bereaved president.

Atop the upper half of the rim is the inscription LIBERTY, with Kennedy’s hair covering the bottom portions of the letters “B”, “E” and “R”. The date 1776-1976 is cradled at the bottom of the coin, while the national motto IN GOD WE TRUST is inscribed in a straight line above the year but divided by the sharp truncation of Kennedy’s neck. The mint mark “D” is found on the right side of the point of this truncation.

The reverse features a symmetrical front view of Independence Hall in Philadelphia, with its clock at 3:00. It was built in 1753 and served as the meeting place of the Second Continental Congress (1775-1783) as well as the Constitutional Convention (1787). Both the Declaration of Independence and the United States Constitution were signed here. The inscription UNITED STATES OF AMERICA wraps around the top half of the rim, while the denomination HALF DOLLAR is found at the bottom. Thirteen small five-pointed stars representing the 13 original colonies are directly above the denomination, following its curvature. The phrase 200 YEARS OF FREEDOM is located on the left of Independence Hall, and the motto E PLURIBUS UNUM (“Out of Many, One”) is on the right. The name of the building runs immediately underneath.

A spire atop the hall inserts itself between the last two letters of the word “STATES” and almost touches the edge of the coin. Seth Huntington’s initials “SGH” are found at the lower right corner of the hall, below E PLURIBUS UNUM.

At the time his artwork was selected as part of the Bicentennial coin design competition, Seth Huntington was the head artist of Minneapolis, Minnesota marketing firm Brown & Bigelow.