Since my “last” installment of this series about my 1796 large cent , I have attended the EAC Convention in St. Louis, where I had the opportunity to have a table exhibiting many of my Dark Side examples! Included was this latest “Dark Corner” subject with a couple of similar examples.

And as I have in all of the previous articles, I will start with images of my certified example: This subject “coin”, described as a possible copper-plated cast, came to light due to a similar example being reviewed that had turned up in a large collection. Extra “blobs” of metal on that example, as well as on the certified coin–along with similar centering and dentillation–appeared to support the theory. 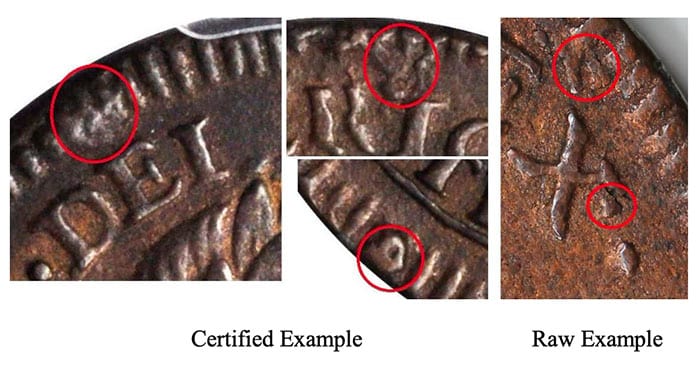 Both examples are attributed as Martin 2.7-Eb.3 with the double cut “A” of GRATIA.; comparison of the slabbed example to a known specimen is as follows: One of the main differences easily seen in the image is a feature I nicknamed the “broken ER”. Initial discussion questioned this as a possible die state, but I understand that Syd Martin’s book documented only one, from the so-called “perfect” dies, and exhaustive internet searching could not produce another similar example.

Lettering is incomplete; “curved” bottoms and several “open” tops. So, not a die state, but a striking anomaly of the source example, and the search was on for another matching example!

And another interesting example surfaced in continued internet searching from a previous Stack’s Bowers auction, but in the form of two uniface copper over lead “impressions” attributed by Stack’s Bowers as the work of Peter Rosa.

One immediately notices the same “striking” characteristics on this one. The uniface pair appear to be “die” linked with the “broken ER” and other matching characteristics (such as some of the dentils) to both the certified and raw examples: This example is also “die” linked to the others by the matching “ER” and other similar features. Having the certified example in a slab certainly prevents some basic analysis such as weight, specific gravity, etc., but I have friends at a local coin shop who have XRF scanned examples for me in the plastic before.

And the results of my slabbed example: Note: Sb- antimony, used to increase the hardness of alloys, with lead alloys for batteries, with lead/copper/tin alloys for machine bearings.

The results may well be inaccurate for trace elements but proved good enough to convince me that the coin is NOT a genuine 1723 Rosa Americana penny!

Conversations with Charles Doyle add much color and insight into the making of these replicas and I thank him for his input. In a follow-up conversation, he explained that:

“Peter used scrap typesetters Linotype to cast the coins and then sent them out to be copper plated. The composition of Linotype is lead, antimony, and tin; the copper portion is all from the plating”.

And per Charles’ note, the following pictures are of one of Peter’s cast Rosa pennies; I quickly accepted the offer to purchase it.