This article is intended as a continuing summary of the deceptive struck counterfeits documented to date, including the damaged “source” coin, the example most likely repaired and used to create the dies to strike the other copies; this source was unknown when we became aware of the first several copies offered for sale on the internet in 2015. This “variety” was included in my original article for CoinWeek–“From The Brink To The Dark Side” (published May 8, 2017)–and identified as a 1796 “S-85” large cent. The probable repaired source example was not encapsulated by the TPG who graded it “ALTERED SURFACE, PLUGGED. This “variety” was first known from a single example discovered on the internet by a fellow Early American Copper (EAC) member back in 2015 (Penny-Wise, Jan 2016 article); from in-hand observation it was correctly called a fake, while the execution of coining this example and the lack of major differences in the details compared to a genuine one make that determination more difficult until other examples are discovered. And of course, others were discovered in many different venues as we became sensitive to theses and began the search!

And after the damaged source was found it became apparent why the details matched a genuine specimen so closely. In hindsight it is much easier to find other existing examples after seeing the damaged and repaired area of the source. In this case the hole obliterated some of the hair detail and had to be engraved by hand during the repairs, a good comparison point along with the common sister marks that seem to just “pop out” as more examples are discovered and compared (example, the “broken A” crossbar common to all of the copies but not of the source; I hadn’t noticed it until I started this summary). The interesting point to note in this comparison is that the “discovery” coin carries the same main sister marks of the probable repaired source on the right. But the dentils on the obverse have been strengthened or engraved entirely, and the letters of “STATES OF” equally treated as well, making them more defined than any of the other documented examples. As previously discussed, a time-line proved helpful in trying to piece together the history of these.

Note: the shape of the last “S” in STATES of Kevin’s example was noted as differing from a known genuine one, and also appears different than the other documented counterfeit examples. 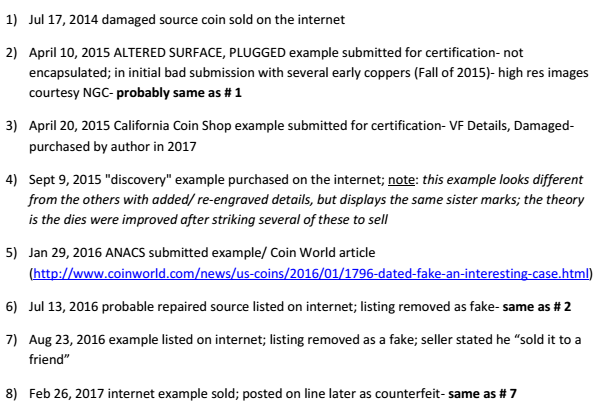 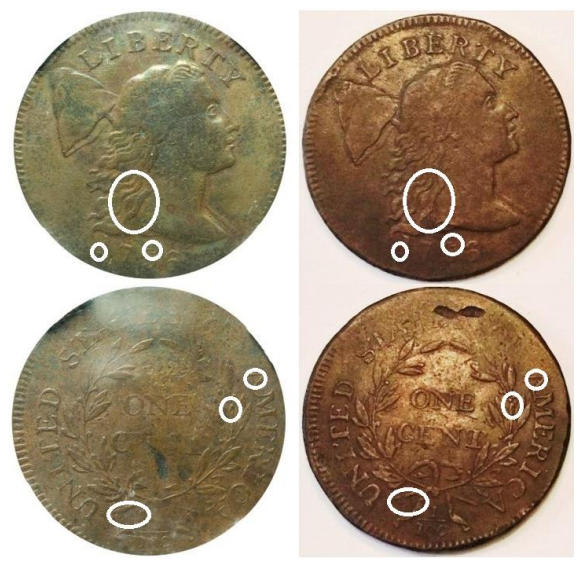 As the others we have been discussing in this forum, these have proven to be very deceptive in the marketplace, although several examples have lately been rejected by the TPG’s. The last documented example sold “raw”, with the original listing terminated by the internet venue, but unfortunately the “seller” name was changed, the “coin” relisted and sold on the second try. The hope is we are turning the tide on these through documentation and communication throughout the hobby as a whole, but have a lot of work to do to that end. 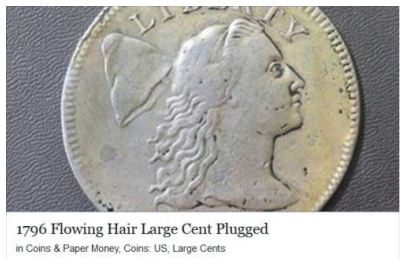 More attribution pages in process; the focused Team of watchers and researchers on our Facebook page the “Dark Side” continues to be vigilant in the documentation and communication of these latest deceptive threats to our hobby!