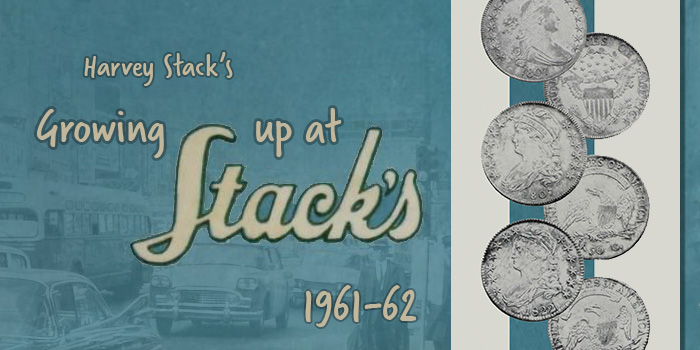 As with everything in the world, nothing remains the same. It was evident to those of us in the coin business that it had grown quite successfully in the fifties. More collectors had entered the field, once they weren’t so intent on the events of World War II. Cultural phenomena like TV developed during this period, which distracted many from finding the time to develop their coin collections. But those who still had the collecting “spirit” or were determined to finish what they started still flourished.

In 1950 the U.S. Mint made some 50,000 proof sets, and by 1961 had made over three million. People speculated in buying and storing Mint State rolls and the late-date proof sets as a ‘store of value”. Earlier in the ’50s speculation thrived, and so did the prices of later-date coinage. But the constant increase in supply, not to mention the hoarding of silver, meant that the growth bubble started to burst in 1960. Proof sets still were available from the Mint at just $2.10 each (a bit more than double face), and so the speculator put some away for possible sale in the future. But overall sales had diminished, and some had aleady liquidated what they had for under issuance price. Not too encouraging!

Additionally, the Treasury Department, in order to stop counterfeits from entering the country, had mandated that all gold coins coming into the U.S. must be licensed and examined. Criteria were established as to what could be imported and what could not.

These imported gold coins were an important source of dates and mints from all series–especially the double eagle ($20.00 gold), which had been stored by the Axis powers in hidden vaults and banks throughout Europe and the Near East during the war. Since these were used by the United States to pay our debts before World War II and the value now in gold was close to double face, foreign banks made a profit above face value when they sold them. Numismatically, the value of the coins dropped as the supply was revealed, and so for a period of time they were not as desireable to own or save. But as the market had lost interest in importing such gold coins because of the new regulations, it was a moot point.

The new regulations said that no license would be issued for any coin dated after 1933 in an attempt to adhere to the Gold Act of 1933-34. The Treasury established a guideline for importing, in accordance with the criteria that THEY created. And to top it off, neither the importer nor the public knew what these rules were since the Treasury didn’t reveal them. So anyone who wanted to buy abroad never knew what would or would not be licensed. It became a very frustrating situation.

Old-time collectors who were able to maintain their collections after the 1933-34 law grew fearful that the Treasury would try to seize all the gold coins in America, even though the law specifically exempted collector items made before 1933. This fear discouraged many who wanted to continue collecting and holding from going further. Some even feared that their collections, if revealed by a direct sale or an auction, might be subject to seizure–either then, or in the future.

At the same time, speculators worried that the hoarding of coins in rolls and bags might also be subject to regulation one day, so for this extra reason the value or these items dropped in value.

The market seemed to almost stop dead for part of the year of 1961.

Stack’s received consignments of smaller collections of early issues in lower grades but we had only two major sales in 1961. One of them was the Howard Egolf Collection, assembled by his father before him, with many of the series completed him. And because he was getting older, Mr. Egolf wanted to see it sold.

The other offering was from a collector who spent many years building a worldwide gold coin collection. Like Mr. Egolf, he gave it to Stack’s to sell while he was alive rather than leave it to be dealt with by his Estate.

Not wanting to have his name used directly, he asked us to call it the Aires Collection, which to him gave his collection an international flavor, as his collection covered gold coins from around the world.

Despite the new regulations, we were able to buy foreign gold coins already in the U.S. from dealers and collectors nationwide. This was a great help for us as we helped Josiah K. Lilly expand his world-class collection. Mr. Lilly, to his credit, was successful in getting some very good and rare coins at extremely favorable prices, often because collectors in the market at the time had concerns about ownership.

So as the year 1961 came to an end, the pressures of the market place began to ease as the hobby began to understand the new import regulations, giving hope for the revival of an interest in coins.

As collectors learned that the Mint was still producing over three million proof sets each year and that the sales of these sets left large stores in the Mints vaults, and that rolls and bags of Mint State current issue of U.S. Coins lost most of their premiums, many returned to the collecting of more “classical” coins.

Older collectors decided to sell, as they, too, saw the revival of interest in building sets of classic coins and the chance to sell at a more favorable price.

There was a surge in some of the “classical short sets”, such as Indian Head Cents and Lincoln Cents–as well as Two Cents, Three Cent Nickel and Silver coins, Shield and Liberty Head Five Cents, Twenty Cent Pieces, Washington Quarters, type sets of Commemorative Half Dollars and 11-piece sets of $1.00 and $2.50 Gold. Since many of the old-timer sets had these as parts of their collections, many were bought intact.

Collectors who already had the basic “short sets” advanced by specializing in a series that was more interesting to them. They expanded into full runs of a series, buying one coin at a time in many instances. Early U.S. coinage was a particular favorite, including Half Cents, Large Cents, Half Dimes, Dimes, Quarters, Half Dollars and the nation’s first Silver Dollars.

In 1962 we were fortunate in starting the Spring season with a few smaller collections, and then, as the auctioneer for the Greater New York Numismatic Covention, we were privileged to offer the Cox Collection of Half Dollars, 1794 to DATE. It was a date, die variety and mint mark collection covering over 500 different coins!

Though not complete in every known variety, it was complete as to all varieties then listed in the Red Book. And besides being of the finest condition, the COX collection had rarities that had been seen only rarely in the market place over the years.

At the sale we had one of the largest audiences to participate in a specialized collection that we had witnessed anywhere.

The R.E. Cox Collection was known nationwide for Cox not only collected, he prepared and exhibited his coins at many shows and schools. His dedication attracted many fans.

Cox prepared a 2″ x 3″ cardboard holder for each coin, labeling them by hand in an early illuminating type style so it is instructive to the viewer. These blocks were placed in frames measuring 2.5′ x 3.5′, in perfect order by date and mint, with the great rarities highlighted.

It was a super way to showcase the coins for public exhibition.

When Stack’s offered each coin at their sale, they were still in their individual holders and delivered to the buyers as proof of pedigree and preservation.

Many were retained in their original holders until relatively recently as collectors found other ways of showing and keeping their coins. However, to this day many of the Cox coins still remain as sold in 1962.

In late Spring we then offered the Tice Family Collection, which was a valuable and comprehensive offering of U.S. Coins.

Over the Summer, we got word that Mr. Samuel W. Wolfson wanted to sell his collection that he had devoted over a decade to assembling. Sam became interested in collecting during the later part of the 1940s after he brought his son to Stack’s to add a few coins to his son’s collection. The displays we had were very attractive to him, and Norman sat with Sam for some time, as I did, reviewing what comprises an important collection. Considering his son was so interested in collecting, Sam felt he would build a collection to have a common interest with his son and develop something for the future.

What happened was that Mr. Wolfson had an incurable disease, with only about a year to live. He felt that he needed to put his house in order and decided that his collection was so important to him personally that he wanted it catalogued and sold while he was alive. His doctors and family also felt that it would be beneficial for him to have this to look forward to.

The SAMUEL W. WOLFSON COLLECTION was sold in two catalogs. One in the fall of 1962 and the other in the spring of ’63, as it contained many rarities that might not have been sold succussfully all at once.

Following his wishes we offered his vast collection of United States gold coins–from the Gold Dollar to the Double Eagle–in the fall of 1962.

The Wolfson Collection was very close to complete, in all series. It contained virturally every date and mint for all gold coins. Many of the early $5.00 and $10.00 gold piecesoriginally came from the famous Col. Green Collection, for not only did we have in stock many examples from the “hoard” we purchased from his Estate in 1943, but also we had repurchased some of the rarities.

Because of the quality and rarity that he assembled, many collections built after the sale boasted of examples from this noteworthy collection. Among those I remember attending the sale were Bareford, Walton, Dr. Bolt, R.L. Miles, Jr., the Norwebs, Gaston DiBello and J.J. Pittman, to name but a few. We were happy with the results rewarded Sam Wolfson for the effort he made to get close to completeness and for allowing us to provide so many coins for his collection

As we at Stack’s often said, the collector who has the patience to wait for the right coin can usually find it in a collection that was built and marketed at auction.

1962 was indeed a very rewarding year.