In 2007, eBay exploded with different varieties and errors of the new George Washington presidential dollar coins. The series was the first circulating coinage to feature edge lettering in 74 years, so it was bound to have some problems. Some of those errors are still well-known today, but others have virtually disappeared and are no longer noteworthy.

The error that started it all.

On February 15, 2007, the same day the new presidential dollars were released to the public, the first “plain edge” example was listed on eBay. It sold for $612 USD, and people across the country began searching through the coins by the hundreds, looking for this new and shocking error. 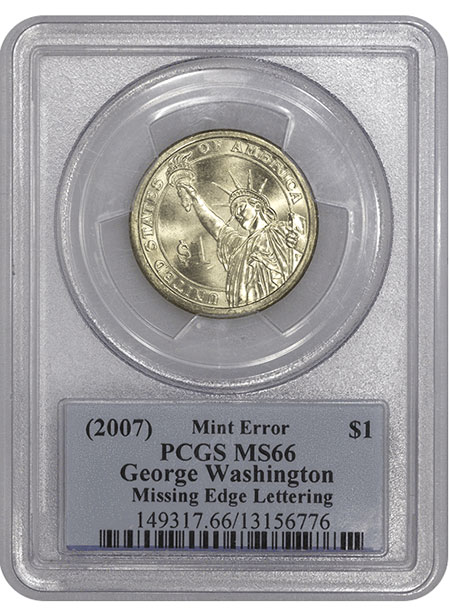 Thousands were found. It’s estimated that somewhere around 200,000 were minted, and the majority were found in Florida. It was an unprecedented error; the date, mint mark, “E Pluribus Unum”, and “In God We Trust” were all left off of the coins. Due to the sheer scale of the error, certified examples now go for only $30-$40 in average grades.

Since the mint mark isn’t present on these coins, no mint is specified when graded. However, the edge of the planchet can be a clue about the mint of origin. Those from Philadelphia seem to show the copper core, as was intended. Many from Denver have an edge that appears entirely golden, like the obverse and reverse surfaces. This in itself was unintentional, and grading companies don’t view it as reliable enough to certify them by mint. It’s believed that the plating bath in Denver was mixed incorrectly, causing it to adhere to the copper on the edges as well as the surfaces.

But with so many people searching through so many coins, other kinds of errors were soon found and capitalized upon. This quick influx of searchers and the expected first-year-of-issue difficulties combined to create a plethora of errors, perceived and rare, to flood the market. When first released, it was believed that the edge lettering had a “correct” orientation. On proof issues, this is true: when the coin is sitting face-up, the edge lettering should be upright. They are struck using three dies – the obverse, reverse, and edge – simultaneously. It was assumed that the same was true for circulation strikes, so pieces with edge lettering in the opposite direction were sold as “Upside Down Edge Lettering”.

However, we’ve since learned more about how the circulation presidential dollars are minted. The obverse and reverse designs are struck, then they are later put into a separate machine to strike the edge. The orientation of the coin at this point is random. Statistically, half should have edge lettering the “correct” way, as proofs do, and half should have it “upside down”.

Just like design elements on any coin, the edge lettering on presidential dollars can be doubled. These have run through the edge lettering process twice, resulting in two entirely separate legends. As a result, they can be in different orientations and start or stop at completely different areas of the coin. This is more commonly seen on John Adams dollars, but Washington examples have been found.

Washington dollars can also be found machine doubled on the obverse and reverse. The clearest indicator of this is that some of the folds from Lady Liberty’s dress can be seen on the rim.

Two other inconsistencies with the edge lettering have been noted, both of which are caused by the coin slipping during the striking process. Some have only partial legends, where portions are missing entirely. Others exhibit full legends, but with improper spacing.

The “Pez Head” errors, also known as the “Severed Head”, are missing a very small part of the reverse design: Lady Liberty’s neck. The line that should indicate the front of her neck isn’t present, leaving her head looking something like a Pez dispenser. It’s believed that this occurred due to over-polishing of the die. The highest points of the die were worn down too much, causing quite a few visible differences on the reverse. Many have weak details on the bottom of Lady Liberty’s robe and are missing detail around the book she holds. In addition, some folds of her dress are “missing”, struck even with the fields of the coin.

These were popular on eBay at the release of the George Washington dollar but are virtually unheard of today. A search on the auction website turns up no direct results, and it’s not an error recognized by any major grading services. At the time they were relatively inexpensive and easy to find for sale.

Clipped planchets are a widely known numismatic error. And while they’re less common on presidential dollars, they do exist. It should be noted, however, that they cause an unexpected effect on the edge lettering.

Naturally, there’s no lettering where the clip occurs, but the portion of the rim directly opposite it is also blank. The missing edge results in insufficient pressure to strike the lettering on the opposite area of the coin, known as the Blakesly effect.

Like any coin, George Washington presidential $1 coins can be found with numerous die flaws – cracks, gouges, etc. Some even have the good fortune of being in locations that have earned them interesting nicknames.

The “Wild Whisker” die crack starts on the left edge of Washington’s neck and extends up onto his chin, then out into the left field. It’s very small, giving it the appearance of an unruly facial hair that the Founding Father forgot to shave. Many different dies are known with similar cracks, making it an amusing but not overly rare variety.

The “Wounded Liberty” die gouge starts near the $1 inscription on the reverse and extends across Lady Liberty’s chest. Unlike a die crack, these occur when something was dragged across the die’s surface, resulting in what looks like an irregular dotted line of raise metal along the coin. There are at least three different known dies with similar gouges in this area.

Finally, some examples exhibit a die break that appears to give Lady Liberty an extra curl in her hair. However, good luck finding any online with the names attached – none are well-known enough to have really caught on. These “errors” have streaks encircling Washington’s head, radiating out toward the rim like a starburst. Similar streaks shoot out from Lady Liberty’s head on the reverse as well. The cartwheeling mint luster does not appear in these areas, which look rougher than the normal surface.

And like the “Pez Heads”, Starburst presidential dollars were very popular in 2007 but have since fallen from favor. It’s uncertain what exactly caused the radiating lines; it could have been a die abnormality, or perhaps post-mint damage from counting machines.

The opposite of the coins without edge lettering, some planchets found their way out of the Mint with only edge lettering. Sometimes called “Faceless Dollars”, the surfaces show quite a few marks and dings from being tossed around with other coins.

Planchets are usually fairly marked before striking, but the minting process removes most of the markings. In the case of this error, a coin was never struck, so the marks stayed. The edge lettering, however, is present, so a presidential dollar can be authenticated by third-party grading and assigned a date and mint mark designation.

All modern coins run the risk of an assortment of errors, and the Washington presidential dollars are no exception. They have been found missing the clad layer, resulting in one side appearing a bright copper color. The clad layer can also be split or only partially missing.

Washington presidential $1 coins can have a filled die or be struck through grease, both of which remove detail from one side. Only significantly affected coins are recognized as an error by third-party grading companies, as small filled areas are fairly common.

Some coins are improperly annealed, though they’re difficult to authenticate. When the planchet is overheated, it develops a coating and appears toned. The color can range anywhere from black to a copper-red.

Finally, Washington presidential dollars can also exhibit a die clash. On the reverse, this is seen in a line that goes from Liberty’s crown to her torch, and from the torch to the denomination “$1”. Due to its positioning, the clash gives the appearance of an extra spike on her crown but is actually from the outline of Washington’s head on the obverse.

Overall, there are many, many errors and varieties of this first-year coin. The new step in the minting process led to a lot of them, but the influx of collectors searching through thousands of coins in search of “Godless Dollars” led to the identification of many errors in a short amount of time. It was inevitable that collectors would pick out anything that caught their eyes and could possibly be considered an error. This led to a few “errors” at the start, but as the frenzy calmed down, we’ve weeded out the truly noteworthy errors from the minor ones.