As the end of 2018 nears, it is a good time to consider which modern coins and sets were the best performers on the secondary market – an approach first used here in 2015.

Once again, there were more world coins that were profitable to those who purchased them at or near issue price than was the case for U.S. coins – where opportunities to flip for a profit, or to purchase items that still sell for well over their issue price, have continued to diminish.

For buyers of U.S. Mint products, there were just two standouts: one at a $54.95-price point accessible to most buyers, the 2018-S Reverse Proof silver set, and another – the 2018-W American Palladium Eagle Proof coin – priced at $1,400.

Released on July 23, the Reverse Proof sets first became “unavailable” on September 1, but after some customers canceled orders, additional sets were made available online in batches. By the time the October 21 sales report was issued, the Mint had sold 199,115 of the 200,000-mintage, and the set was declared sold out not long after that. 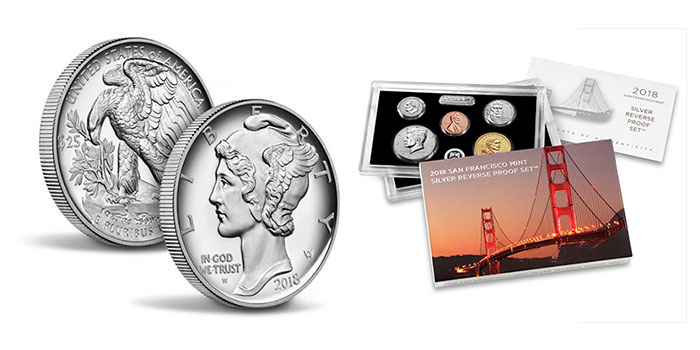 Issued to mark the 50th anniversary of the San Francisco Mint’s first production of Proof coins in 1968, these sets had a lot going for them. The 10-coin sets were the first to feature reverse Proof versions of several coins, including the Lincoln penny, Jefferson nickel, America the Beautiful quarters, and Native American $1 coin – which collectors of those series need for a complete set.

Sets in original government packaging currently bring on average $110 (Recent eBay sales), which probably surprised those who noticed the sets did not sellout immediately and perhaps thought they would perform more like last year’s Enhanced Uncirculated sets. But those sets were clad, not silver, and had a higher mintage at 300,000.

Buyers who had their Reverse Proof silver sets graded and were fortunate enough to have all 10 coins come back as 70s, which was challenging (especially for the quarters), did even better as those are selling for several hundred dollars. In addition, those whose JFK half dollars are the light finish variety also did well. The other big winner was the 2018-W Proof American Palladium Eagle launched as a bullion issue in 2017. In part, these coins have benefited from the rising price of palladium, which is currently identical to that of gold at about $1,250 per ounce but was about $1,000 at release time.

In the immediate aftermath of the roughly five-minute sellout of these coins, pre-orders for graded-70 pieces soon reached over $3,000, and retail coin sellers have continued to sell them for $3,500 (even more for certain labels), with raw coins priced around $2,400.

But with time, 70s and ungraded coins have converged in price in online auctions typically in the $1,800-$2,300-range (Recent eBay sales). As usual, it is best to wait for the hype to pass before purchasing unless you bought directly from the Mint.

Next year the Mint will release a Reverse Proof version of this coin.

The authorizing legislation calls for the collector versions of Palladium Eagles to carry a different finish with each release.

Modern coins frequently “pop and drop”; i.e., they sell for a premium while they’re hot (typically right after they sellout from their issuing mint or distributor), and then prices recede as interest in the item cools down.

But there are always some releases that retain solid aftermarket premiums months and even years after their release. Good examples include the Tiffany Art series of two-ounce and one-kilo silver pieces and the Austrian 25-euro niobium-silver series.

In 2018 there were as usual both collector and bullion world coins that did well, though in general, they saw smaller gains than pieces from previous years. On the numismatic coin front, the clear winner was the second release in the Polish Mint’s series for Niue called “Gods”, which debuted in 2017 with a coin for Ares that continues to sell for $1,100 or more and which was initially available for about $250-300, depending on the retail seller.

Like the Ares piece, the 2018 Poseidon coin is an ultra-high relief coin with an antique finish struck from two ounces of silver with selective gold plating and a mintage of 500 coins. There are many coin series on Greek and other mythological figures issued in a similar format, but these pieces stand out for their superb level of craftsmanship and detail. They clearly struck a chord with collectors.

Poseidon started off in early 2018 for about $300 and has recently brought between $541 and $950 on eBay (Recent sales). Many sellers list both the Ares and Poseidon issues for high fixed prices with the ability to negotiate a better price, and actual sales are generally more in line with auction prices.

Another new series issued for Niue in the same format debuted this year called “Four Horsemen of the Apocalypse”, which was produced by the Polish Mint for The Coin Shoppe, a leading Canadian retailer of modern world issues. The series began with the 2018 White Horse coin and will continue with the Red Horse in 2019, the Black Horse in 2020, and the Pale Horse in 2021.

The White Horse coin was initially available for around $400 earlier this year and recently brought between $500 and $800 (Recent eBay sales). A third collector coin that has done well, though it is off its peak, is the 2018 Australia Swan five-ounce, high-relief silver Proof from the Perth Mint with a mintage of 500 coins. Briefly available for about $300 on the day it was released, the coin sold out instantly and has recently been bringing about $400 with sales ranging between $325 and $500 (Recent eBay sales).

Featuring the second design in the Swan series, this coin is the first of the series in this attractive format — with the others being one-ounce silver bullion with a 25,000-mintage, silver Proof coins with a 2,500-mintage, and a one-ounce gold bullion version with a 5,000-mintage.

As far as world bullion coins, there have been a number this year that have seen spikes in their aftermarket value, but two standouts are the one-ounce silver bullion version of the Swan series and the first release in the Chinese Mint’s series of restrikes of famous Chinese rarities: the 2018 Kiangnan Dragon Dollar, which is a round or medal with a 5,000-mintage. The second release in the latter series, the Tientsin Dollar, was released recently and saw an immediate sellout and price increase.

Given the lower price points of these coins compared to the three collector issues, those who did the best with them bought significant quantities. Compared to previous years, having 2018 Perth Mint releases graded was less profitable. There seems to be less interest in graded versions of those coins, and they tend to grade well.

Some additional 2018 world collector coins that have done well include the recently-released 2019 Australian New Map of the World – Captain Cook’s Tracks, the first of a new domed silver Proof series from the Royal Australian Mint, and the same mint’s 2019 Earth coin, the first of its newest series of domed astronomy-related silver Proof coins called “Earth and Beyond.”

With so many interesting and unusual world coins coming out, today’s collector has a wider and more diverse range of coins to choose from than at any point in the past. But in this saturated market, picking winners continues to become more challenging.

This review of 2018’s top seven performers will hopefully aid you in finding tomorrow’s winners. But as always, the key is to buy what appeals to you and not to get too caught up in the coin of the moment. If you really love a particular coin, you won’t feel so bad if it loses some of its value.

His work has appeared in CoinWeek since 2011. He also currently writes regular features for Coin World, The Numismatist, and CoinUpdate.com and has been published in Numismatic News, COINage, and FUNTopics, among other coin publications. He has also been widely published on international political, military, and economic issues.

In 2015, his CoinWeek.com column “The Coin Analyst” received an award from the Numismatic Literary Guild (NLG) for best website column. In 2017, he received an NLG award for best article in a non-numismatic publication with his piece, “Liberty Centennial Designs”.

In October 2018 he received a literary award from the Pennsylvania Association of Numismatists (PAN) for his 2017 article, “Lady Liberty: America’s Enduring Numismatic Motif” that appeared in The Clarion.