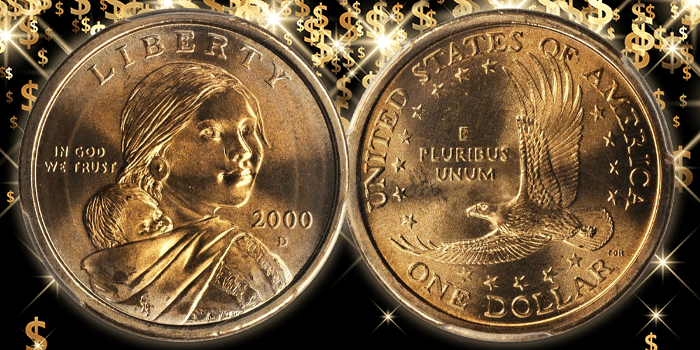 By 2000, the United States Mint was facing a dramatic upswing in the demand for circulating coinage. Consequently, the Denver Mint installed a series of new modern bulk coin bagging machines to help accommodate the overall increase of over 8.5 billion coins.

Officially released into circulation on January 27, 2000, with great fanfare after a massive marketing push, it only took a few years for the Sacagawea dollar to flounder. In 2000, Denver struck almost 519 million Sacagawea dollars – 40.3% of the total mintage for that year. However, this number dropped to just under 80 million in 2001 and to 3.73 million in 2002. A 99.3% decrease over just two years!

While the Philadelphia Mint struck the famous Goodacre and Cheerios types and the San Francisco Mint struck the Proof coins, Denver was responsible for the 75,000 Millennium Sets. Sold for $39 USD ($67.22 adjusted for inflation as of the time of publication), these sets contained the 2000 American Silver Eagle, the 2000-D Sacagawea dollar, and a one-dollar bill with the number 2000 included in the serial number. These Sacagawea dollars were released with a special burnished proof-like finish. To receive the “Millennium Set” designation on a graded and slabbed Sacagawea dollar, the coin needs to be submitted in the original packaging. Today, these sets sell for between $80 and $100.

Due to the mintage of over half a billion coins, the 2000-D Sacagawea dollar is a common coin. Below Mint State, these coins are worth face value and can be spent freely without concern. With only 2,235 examples graded in MS 67, 476 in MS 68, and four in MS 69, this type becomes scarce only in high Mint State.

In MS 67 and below, however, these coins are not worth grading, since their value is less than the submission cost. Collectors should be confident that their coins are MS 68 or above if they are looking to grade them for a profit. Currently, MS 68s command a price between $40 and $100. Since coins of this grade are all very similar, this price fluctuation depends on the seller’s photos and the interest of the bidders. For example, in January 2022, an MS 68 sold on eBay for $119 with relatively nice pictures, while a coin with near-identical eye appeal yet terrible pictures sold seven months later for only $60.

In accordance with Treasury Department guidelines, the obverse design of the golden dollar portrays Sacagawea, a member of the Lemhi Shoshone tribe who acted as the guide for the famed Lewis and Clark Expedition in 1805-6. While her bust is facing right in a classic three-quarter profile, Sacagawea looks directly at the viewer and carries her infant son Jean-Baptiste on her back. Since the design guidelines requested that all submissions “be sensitive to cultural authenticity and try to avoid creating a representation of a classical European face in Native American headdress”, Sacagawea is depicted in a naturalistic style. Designer Glenna Goodacre used a modern-day Shoshone woman named Randy’L He-dow Teton as her model.

Above Sacagawea’s head is the legend LIBERTY, in the left-hand field is IN GOD WE TRUST, and in the right-hand field below her chin is the date (2000). The mintmark (D) is below the date. The designer’s initials (G.G) can be seen on the infant’s swaddling cloth at the bottom of the design.

The reverse, like many US coins, is dominated by an eagle. With outstretched wings, the eagle soars to the left. Above the eagle’s head is the US motto E PLURIBUS UNUM. The entire design is ringed by the inscription UNITED STATES OF AMERICA and the denomination ONE DOLLAR. The eagle’s right wing tip overlaps slightly with “OF” at the top of the coin. Within the legend is a ring of 17 stars. These 5-pointed stars represent all of the states belonging to the Union at the time of the Lewis and Clark Expedition. The designer’s initials (T.D.R.) can be seen below the eagle’s tail feathers and to the right of the denomination.

The edge of the 2000 D Sacagawea dollar is smooth or plain.

The Sacagawea obverse was designed by sculptor Glenna Goodacre. When Goodacre passed away at the age of 80 in 2020, she was widely acknowledged as a highly skilled artist. Before her 1999 design for the Sacagawea dollar, Goodacre was known for creating the Vietnam Women’s Memorial on the National Mall in Washington, D.C. and the Irish Memorial in Philadelphia.

As a sculptor and engraver for the U.S. Mint, Thomas D. Rogers was responsible for the design of several modern U.S. coins. After joining the Philadelphia Mint in 1991, he designed the obverse of the commemorative 1996 silver dollar for the Smithsonian’s 150th anniversary and the original reverse of the American Platinum Eagle in 1997. Rogers later designed the reverses of the Massachusetts, Maryland, and South Carolina 50 State quarters. He retired from the Mint in 2001.