Coin production at the United States Mint had become erratic in the years leading up to the War of 1812, with no half cents struck since 1811, half dimes off the production roster since 1805, and silver dollars and gold eagles absent since 1804. And while gold and silver bullion for planchets came from various domestic resources, including melted foreign coins that were still circulating legal tender in the United States, copper planchets came from England. The origin of the copper planchets from Boulton & Watt of Birmingham, England proved problematic during the War of 1812, which saw the United States declare war on Great Britain after the British and French established economic sanctions against the U.S. during the Napoleonic Wars. The U.S. Mint continued making large cents from on-hand surplus for 1812 and 1813, but in 1814, the United States Treasury ordered the Mint to stop production of one-cent coinage until further notice – a drastic directive since copper planchets were still on hand.

Furthermore, the Treasury did not authorize Mint Director Robert Patterson to pay wages to the United States Mint work crew. It was a situation that went on for nearly a full year before Patterson took matters into his own hands in December 1814 and directed Chief Coiner Adam Eckfeldt to use all copper planchets on-hand for minting large cents. These coins went into pay envelopes for mint workers and, most assuredly, were promptly spent.

No large cents were minted in 1815, the year the war came to an end. None were minted until the embargo came to an end in 1816, making 1815 the only year the cent was not struck. A coin shortage ensued, and copper tokens from private mints in the United States–as well as pieces from overseas–were used in commerce to fill the void. Many of these pieces remained in circulation even long after the Mint resumed large cent production.

The 1814 Plain Versus Crosslet 4 Cents

With the embargo lifted, copper planchets from overseas flooded the mint’s supplies. But that doesn’t mean presses began rattling off a slew of 1816-dated large cents.

During the early days of the United States Mint, dies were often used for as long as they were physically viable, even if that meant striking coins with dates that had already passed. This helps explains why so many overdates were made during the first decades of the U.S. Mint, though it is often the situation that coins bear dates older than their years of manufacture. 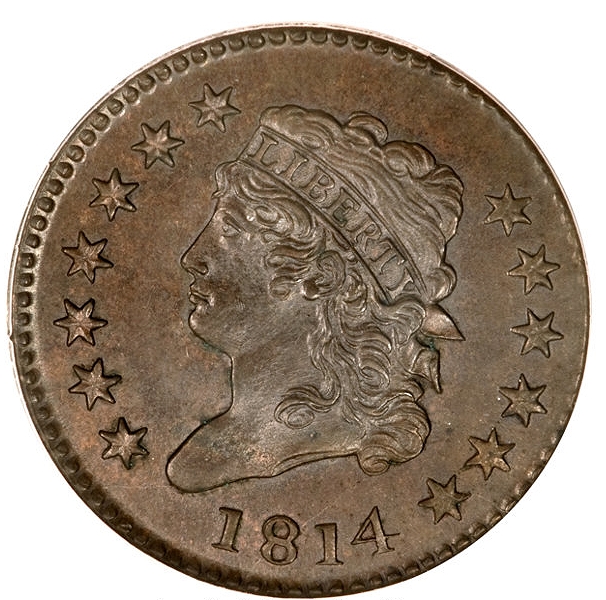 That was the case with the 1814 Plain 4 large cent, which numismatists have determined in recent years was struck during the early months of 1816. Early American Coppers (EAC) President Bill Eckberg shared in a 2020 CoinWeek interview that part of what clued experts toward this conclusion was a seeming overabundance of 1814-dated cents as compared to relatively small numbers of 1816 cents.

“There are way too many 1814 large cents and way too few 1816 large cents relative to the numbers that we thought had been made, but if all of those delivered in February of 1816 were dated then the numbers work out correctly,” Eckberg told CoinWeek. A critical anti-counterfeiting message must precede any further discussion of the 1814 cent: no 1815 cents were ever struck. Yet a flurry of counterfeit and or altered pieces made to resemble 1815-dated large cents has nevertheless been encountered over the years and are still seen by collectors today. Unfortunately, some non-collectors or those new to the hobby do not know that all 1815 cents are fake, only finding out the unfortunate news after the fact – and after paying large sums of money for a coin that isn’t real.

The United States Mint reported a mintage of 357,830 across both varieties of 1814 cents. The 1814 Crosslet 4 large cents is the more common of the two types of 1814-dated cents. PCGS CoinFacts estimates that approximately 3,000 1814 Crosslet 4 cents exist today in all grades, while about half as many of the Plain 4 are known – approximately 1,500.

As all Classic Head cents go, the two types of 1814 cents are both relatively scarce and expensive. Even in well-worn circulated grades, the 1814 cent trades in the low-to-mid three figures. Specimens of the 1814 Plain 4 and Crosslet 4 trade for similar amounts in PCGS G4 and PCGS F12, with both taking $110 and $475 in those two grades, respectively.

Price spreads become more evident in higher grades, with the Plain 4 trading for $2,250 in PCGS XF40 and the Crosslet 4 fetching $2,100. In Uncirculated grades, the conditional rarity of the Plain 4 is clear, with only 17 estimated in a grade of MS60 or better and merely three in MS65 or better. There are no known Fully Red (RD) specimens and just one Red Brown (RB), which sold for $32,900 in a grade of PCGS MS64RB. The finest-known Plain 4 is graded PCGS MS67BN.

The Crosslet 4, an extremely scarce coin in MS grades but far more common than the Plain 4, offers some 50 specimens in uncirculated grades and four in grades of MS65 or better – none of which are certified RB. The record price for an 1814 Crosslet 4 belongs to a PCGS MS65BN that crossed the block for $55,812.50.