Central Europe’s largest forested area, Kalkalpen National Park is home to 30 different ecosystems. Of the park’s 15 endemic vascular plants, the Austrian bellflower is the standout. A familiar sight in the park, the plant’s bluish-purple drooping flowers are a rare sight elsewhere. But you can find one on Alpine Forests, the second coin in the Alpine Treasures series, which highlights the rare species of plants and animals native to the Austrian Alps.

Located in Upper Austria, Kalkalpen National Park was established in 1997. Still largely untouched by human habitation and relatively unpenetrated by transport routes, the dark and dense woodland found in this northern branch of the Limestone Alps is a precious reminder of the pristine, primeval forest that covered the continent for millions of years. The plan is to gradually return the Kalkalpen forest to its completely unmanaged, natural state by letting nature take its course. This will not only provide deep insights into the natural world during prehistoric times but also shed light on the environment in which our distant ancestors lived. Dating from 1474, the oldest beech tree in continental Europe can be found in the park’s primeval beech forest.

The Austrian bellflower is shown in the foreground of the coin’s obverse. A lynx features on the coin’s reverse, behind it the main ridge of Kalkalpen National Park’s Sengsengebirge massif and its densely wooded slopes. Six lynx currently reside in the park but, given the wild cat’s wary nature, sightings are relatively rare.

The coin is struck in 986 fine gold in proof quality to a maximum mintage of 20,000 and comes in a case complete with a numbered certificate of authenticity. The gold content of this gold coin is a ¼ ounce. 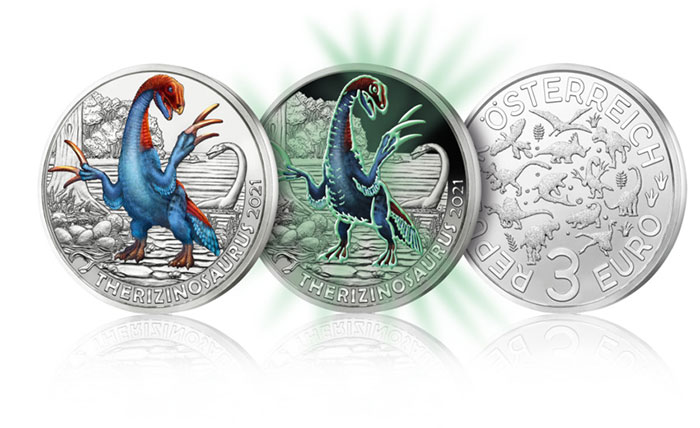 Appearances can be deceptive. Weighing five tons, up to 10 meters tall, and boasting sharp claws that were longer than those of any other land animal that has ever existed, the Therizinosaurus was not as dangerous as it looked. The subject of the sixth coin in the superlative Supersaurs series was actually a vegetarian and its claws more suited to detaching vegetation than attacking the other animals that roamed the planet some 70 million years ago.

As a theropod, Therizinosaurus cheloniformis was not only distantly related to predators such as Tyrannosaurus rex but also to present-day birds. Originally carnivorous, over time the Therizinosaurus changed its diet and became a pure herbivore. During the late Cretaceous period, it lived in areas of the northern continent of Laurasia that now correspond to North America, China, and Mongolia. Up to one meter in length, flat, curved, and pointed at the end, the dinosaur’s claws are responsible for its nickname, ‘scythe lizard’. They were used primarily to reach high branches in trees as well as perhaps for self-defense. Well-preserved remains of one of its close relatives have suggested that, rather surprisingly, the Therizinosaurus was also partially feathered.

Therizinosaurus features all 12 of the extreme prehistoric animals in the Supersaurs series in silhouette on its obverse, while a color-printed Therizinosaurus is shown in its native prehistoric habitat next to a nest full of eggs on the coin’s glow-in-the-dark reverse. The 3 euro Supersaurs coins are legal tender in Austria.