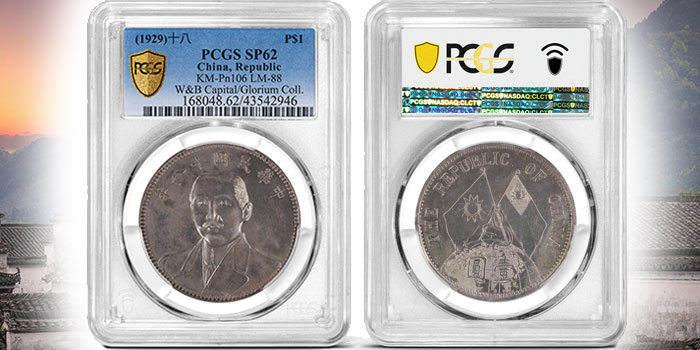 The Chinese 1929 pattern dollar of Sun Yat-sen featuring the globe reverse design is a desirable rarity out of the reach of most numismatists and collectors, and it might be one of the most legendary republic coins for China. While it is unknown how many exist, the total mintage is believed to be 15 coins.

The desire was to produce a new dollar coin featuring Sun Yat-sen to replace the (1927) issues featuring his likeness. In 1929, the task for the mint requested possible design adaptations for this new circulating dollar coin. The bulletin called for four different design possibilities, three of which featured Sun Yat-sen. The vast majority of concept patterns that were struck featured a bust of Sun Yat-sen in profile on the obverse and a junk on the reverse.

Many of these concept pattern designs were produced by international mints hoping to land a contract from China to produce its coinage. However, one of the concepts requested was a map of China and the national flags. According to Chinese coin expert Eduard Kann, who lists this coin in his catalog as Kann-610, this concept pattern was struck at the Tientsin Mint. However, it is unknown and unpublished whether the design and dies were produced by China or another country.

The concept features a forward-facing bust of Sun Yat-sen on the obverse paired with a reverse that reveals a half globe featuring Asia, Europe, and part of Africa, with crossed flags of the Republic of China above this globe. The globe design concept was only struck as a pattern and in a very small number. It is believed that the failure of the design was due to the obverse, which didn’t look enough like Sun Yat-sen to many. The adopted design of the Junk Dollar featuring Sun Yat-sen would be produced for circulation in 1932.

Recently one of these incredible pattern dollars was submitted to PCGS through the Hong Kong Express service. This example, which had been in an alternative service’s holder, had come from the W&B Capital Collection, and was featured as number 12 of Top Chinese Coins – Silver Coinage, by Michael Chou, Ron Guth, and Bruce Smith. It was graded SP62 by PCGS.