The theme of this year’s event is “Dynamic Designs, Artistic Masterpieces.” This morning, as I emerged from slumber and made my way to my workspace, I was greeted with another blustery and rainy day here in New Hampshire. But by midday, Mr. Sun has made his welcome appearance and, by gosh, I actually saw green grass by my window and forsythias nearly blooming. Spring, my friends, is a glorious time indeed.

Another celebration for us coindexters to revel in is at hand, too, for as this installment posts, we are in the midst of National Coin Week, April 17-23. While not a guarantee that frequenters of local banks and credit unions will yield significant finds in rolls of coins bought and change received at your local merchant, you never know as some dealers are still known to “salt” special coins back into circulation for this event. To borrow the old catchphrase of New England’s favorite, Dunkin’ Donuts: “It’s worth the trip.”

For the budding numismatist, this is yet another unique approach to starting a collection, which goes for my firmly established fellow coindexters, as well. If you are stumped about what to collect, let your eyes be your judge and finalizer. With that in mind, I have selected a trio, along with a new coin you can pick up in circulation, that should be in line with the budgets of the average or new collector — from $10 to $900.

When I was around 10 years old, I was bonded to my Red Book everywhere I went. I figured at that point, figuratively, I actually “owned” all the coins!

Nothing Half-Hearted About This Half Eagle

Yet, the first coin I was excited to see in hand and to own was Bela Lyon Pratt’s incuse-designed Indian Head $5 Gold, or Half Eagle. Just a miniature gold masterpiece in design, I remarked, even as a youth. The spirits of America emblazon both sides of this gold coin. While sometimes a particular coin has an obverse that is tantalizing, in many instances, at least to my taste, the reverse of many coins leaves a lot to be desired. This is not the case with the $5 Indian Head, which features a powerful and accurate rendering of an Indian chief in headdress on the obverse and on the reverse, our national bird and American symbol of freedom, the great bald eagle.

I will admit that I am still infatuated with this coin. So, whenever I have the opportunity to handle one, it is with respect. It still evokes more than a little thrill. I own a lightly circulated “raw” 1909 that rests on the top of my living room windowsill. So, each day when I raise the shades in the morning, I am greeted with that great coin. My, how that gold coin sparkles in the sunlight. Presently, obtaining an MS 61 will take about $900.

Of course, the little brother $2.50 (or Quarter Eagle) coins bear the same design. But for me, the larger $5 coin displays the design much better to my eyes.

Another of my favorites is the Buffalo, or Indian Head, Nickel. Designed by James Earle Fraser, this coin, while only in circulation for 25 years, is an institution in numismatic (as well as non-numismatic) circles. Such is the staying power of the powerful design elements. Minted from 1913 to 1938, this wildly popular coin ushered us through Prohibition and the Great Depression. When you think of the song “Brother Can You Spare a Dime”, that 10 cents often evoked an image of rubbing a pair of Buffalos together.

Once again, for me, this is a true double play design. A coin that can be enjoyed while spying either side of the coin, with a lifelike bold Indian acting as guardian on the obverse and a bold and majestic buffalo dominating the reverse.

Amazingly, in this market, you can find a superb NGC MS 65 example of the last year of issue, the 1938-D, for around $65. If that is too rich for the young numismatist’s wallet, you can secure a lightly circulated one for under $10.

A Coin from a Husband and Wife

Then, there is this spectacular example of US coin design, the impressive Oregon Trail Memorial. Although perhaps overstaying its welcome (1926-1939), this long-running series was created by two prolific American sculptors, the husband-and-wife team of James Earle Fraser and Laura Gardin Fraser.

Through their combined efforts, the couple produced several of our country’s commemoratives and various congressional medallions. Mr. Fraser created perhaps the most popular and endearing circulating coin in US numismatic history — the Indian Head (or Buffalo) Nickel above.

Laura, putting forth her artistic brilliance, generated the designs and models for several issues, including the 1921 Alabama Centennial Half Dollar and 1922 Grant Half Dollar and Gold Dollar, along with the 1925 Fort Vancouver Centennial issue.

She was the first woman to have her work produced on US coinage. This keen experience laid the foundation for the Frasers’ joint collaboration on the Oregon Trail Memorial project.

This coin is just a marvel to view and is still very affordable to own. Emotions begin to stir as we consider the Native American Indian warrior proudly and boldly sculpted in the middle of an outlined map of the continental United States. Armed with a longbow, he gestures to the pioneers leading that Conestoga wagon train toward the glorious sunset and new freedom that awaits them in the West.

Finally, a tremendous hurrah! Due to obstinateness and politics, the original “announced” winner of the 1932 Washington Quarter design contest will finally be presented as it should have been. Yes, my fellow coindexters, Laura Gardin Fraser’s glorious winning design will supplant John Flanagan’s familiar institution, which has donned the workhorse quarter for the past nine decades, until 2025. 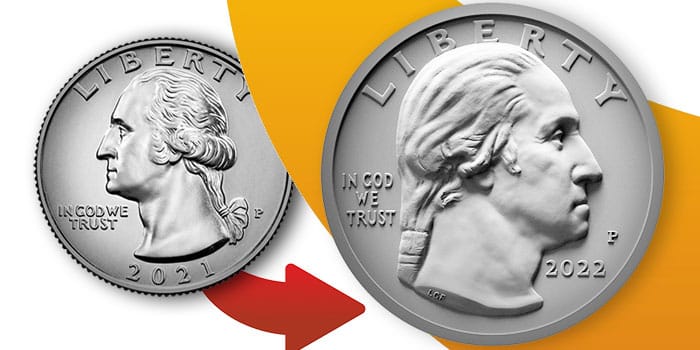 2022 ushers in the American Women Quarters series and it will be special. I can’t wait to finally see Ms. Fraser’s spirited and robust design in actual circulation.

For the record, Ms. Fraser’s design had been used once before, on the 1999 $5 Gold Commemorative honoring the 200th anniversary of George Washington’s death. Yet, of course, that gold coin did not ever circulate. That is why this is such a treat, until 2025.

All three of the classic coins I selected, and their designers shared a common bond. Pratt and James Fraser worked under the tutelage of Augustus Saint-Gaudens and Laura Fraser won an award in his name. So, of course, new collectors looking for dynamic inspirational design need look no further. And while each type coin will be above the original budget I set earlier, they must be included here.

Why? Because Saint-Gaudens’ $20 and $10 Gold coins are perhaps the most remarkably beautiful coins ever created for general circulation.

Both offer a wonderful visual double play. Each series has a bounty of true rarities that will set back even the deepest wallets. However, common type coins in MS 63 can still be found at relatively reasonable levels

As this article posts, you still have a few days left to take advantage of the chance to win a Mint State $20 Saint-Gaudens coin. APMEX is honoring the ANA week with some interesting coins that met the Dynamic Designs challenge and they are also offering free entries for a chance to snare a 1924 $20 Saint-Gaudens Gold coin here.

You have until April 23 to enter. Good luck!

The list, of course, goes on. My fellow coindexters, I would be very interested in hearing about your favored US coin, too.