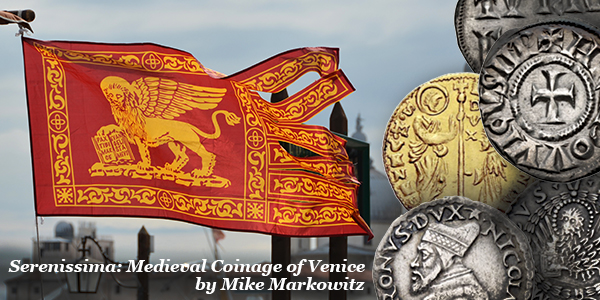 BETWEEN THE YEARS 1200 and 1600, a handful of feisty Italians created one of the greatest commercial and maritime empires in history. Venetians wrecked the Byzantine state, fought the Ottoman sultans to a standstill, defied a series of Popes and German emperors, and adorned their city with masterpieces of art and architecture that still leave tourists gasping in wonder. There are many explanations for their achievements, but the quality and integrity of Venice’s medieval coinage was a big part of the story.

Fleeing barbarian invaders in the sixth century, refugees from the North Italian Plains found a home on marshy islands in the Venetian Lagoon, a shallow inlet of the Adriatic Sea covering some 210 square miles (550 sq/ km.) Trading in salt and fish, they owed nominal allegiance to the distant emperor in Constantinople. In 828, some Venetian merchants stole the remains of St. Mark the Evangelist from Muslim-controlled Alexandria in Egypt. In the medieval world, relics were widely thought to have miraculous powers, and St. Mark became the patron of a thriving city that emerged on the islands in the lagoon.

The ruling elite of Venice balanced precariously between the Byzantine Empire and the squabbling Carolingian emperors of the West (successors to Charlemagne[1]). Early in the ninth century, Venice became a mint for the Carolingian denaro[2], a high-quality silver coin that was struck in many Western European towns. Venice minted coins in the names of Louis the Pious (814-840) and Lothair (840-855). In subsequent decades, the coinage gradually became cup-shaped (denaro scodellato) and the ruler’s name was often replaced with abbreviated Latin religious invocations, such as +CRISTUS IMPER’ (“Christ Rules”) or XPE SALVA VENECIAS (“Christ Save Venice”).

In the 12th century, there is a gap in the coinage (1125-1156); apparently the mint closed down. Vitale Michiel II (the 38th doge, ruled 1156-1172) was the first Venetian to put his own name on coinage. The very rare coin, a fractional denaro (mezzo denaro or bianco scodellato) weighing only about a third of a gram, is inscribed +MICHIL DUX. It bears a cross on one side and a crude bust of St. Mark on the other. Under the following doges, these tiny coins were struck in increasingly debased alloys. “Doge” is Venetian dialect for “dux” (in English, “duke,”) a ruler elected for life by an assembly of the ruling elite. These wealthy merchants, some 150 families (or about 1,200 adult males) were inscribed in a “Golden Book” officially closed to new families in 1297. Generation after generation, the same names appear in the list of doges: Dandolo, Mocenigo, Gradenigo, Ziani. Venetians called their state La Serenissima, “The Most Serene Republic.” The medieval history of Venice, however, was anything but, marked by endless wars against the Genoese, the Ottoman Turks, and even the Pope.

By the beginning of the 13th century there was a clear need for a high-value coin that would be widely acceptable in international trade. We know that Doge Enrico Dandolo (ruled 1192-1205) introduced the grosso[3], or matapan, but we’re not sure exactly when. One theory states that the coin was created to pay workers building ships and forging weapons for the “Fourth Crusade,” which sacked Constantinople in April, 1204. More recent studies (Stahl, 21) indicate an earlier date, probably 1194. With a theoretical weight of 2.2 grams, the coin was struck in .985 pure silver – the best medieval refiners could produce. Based on its silver content, the grosso (or “big one”) was valued at 24 of the small, debased piccoli (or “little ones”). The design was strongly influenced by Byzantine iconography, with an enthroned Christ on the obverse and the standing figures of St. Mark and the doge, both men holding a banner between them, on the reverse.

If imitation is the sincerest form of flattery, the grosso was widely flattered. For example, the medieval Kingdom of Serbia (established 1217) struck nearly identical coins differing only in the inscription. Even the declining Byzantine empire minted a similar type, known as the basilikon, with the reverse showing two co-emperors standing together. Around 1250, as trade in the Mediterranean world flourished and expanded, Genoa and Florence–commercial rivals of Venice–minted new, high-value, pure gold coins (the genovino and fiorino, or “florin”) on a standard of about 3.5 grams. Conservative Venetians resisted the return of the gold standard for a generation, but finally joined the trend in 1284 with the introduction of the ducato d’oro or gold ducat.

The coin was 3.53 grams of gold, 23-3/4 carats fine (.9896). The obverse bears a standing figure of Jesus surrounded by stars, with a Latin inscription that translates: “May it be dedicated to Thee, O Christ, this duchy which You rule.”[4] The reverse shows St. Mark handing a banner to the doge.

Widely imitated throughout the eastern Mediterranean, the gold ducat was also known as a zecchino, from the word zecca meaning a coin mint. Despite its explicit Christian imagery, the coin circulated widely in trade throughout the Muslim world for centuries.

Venice minted ducats to the same standard until the end of the Republic in 1797.

To meet the need for small change in a growing urban economy, Venice minted fractions of the grosso–including the half, or mezzanino, and the quarter, or soldino. The mezzanino bore a rather startling obverse image of Christ emerging in triumph from the tomb, reflecting a new interest in pictorial storytelling. The soldino depicted a kneeling figure of the doge on the obverse, with a lion on the reverse.

After 1353 the grosso was no longer issued, the soldino proving to be popular and convenient.

In 1471, a wealthy merchant named Nicolo Tron was elected as the 68th doge.

Influenced by the Italian Renaissance fascination with portraiture, he commissioned Antonello della Moneta[5] to engrave his stern, bearded visage for a new 6.5-gram, .948 fine silver coin–the first Italian coin to bear the name lira. The reverse showed the winged lion of St. Mark in a wreath. The coin was a success, but the portrait was not. The Venetian Senate was deeply suspicious of any attempt to promote a “cult of personality”. After the death of Tron in 1473, the Senate enacted a law forbidding any individual portrait of the doge on the coinage.

The discovery of the New World, with its subsequent flood of Spanish silver and gold into European markets, was a disaster for Venice. The massive inflation of the 16th and 17th centuries saw a proliferation of new denominations that struggled to keep up with rising prices – the humble copper soldo becoming Venice’s common small change. One type bears particular notice, however: the copper gazetta of two soldi. In the early 17th century, when the world’s first printed newspapers appeared in Venice, they sold for just one gazetta, from which many languages acquired the word “gazette”.

Collecting the Coins of Venice

A real challenge for collectors of this series is to collect at least one example of a coin from each of the 83 doges who issued coins. Because these men served for life (and were often elderly when elected), there are some very short reigns that produced rare coins.

Although the first issue of the grosso is quite rare, many types from the 14th and 15th centuries are common and affordable; very fine specimens can sell for about US$100 or less. Because the gold ducat was a trade coin that saw heavy circulation, finding high-grade medieval or early modern examples can be difficult. VF specimens of common types typically sell for under $500, while Mint State pieces go for $1000 – $2000 or more depending on rarity. 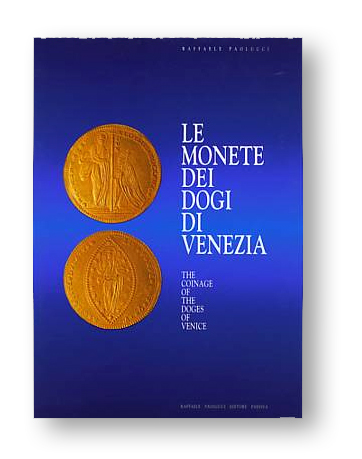 The standard reference for Italian coinage is the monumental Corpus Nummorum Italicorum published in 20 volumes between 1910 and 1943 by King Victor Emmanuel III[6], who modestly described it as a “first attempt at a general catalog of medieval and modern coins minted in Italy, and by Italians in other countries.” The Italian Ministry of Culture has generously placed this massive work online in PDF format. Volumes VII and VIII cover the coinage of Venice.

For English-speaking readers, a more accessible work is Paolucci’s Le Monete dei Dogi di Venezia (The Coinage of the Doges of Venice, 1990). With text in Italian and English, it is out of print but sometimes available from numismatic book dealers.

[3] Grosso simply means “large.” The Venetian grosso gave its name to many other coins, including the French gros, the English groat and the German groschen. There are various theories on the origin of the term matapan; the consensus seems to be that it derives from an Arabic word for “seated”, due to the enthroned figure on the obverse.

Bacharach, Jere. “The dinar versus the ducat”, International Journal of Mideast Studies. 4. (1973)