Let’s take a tour through the auction records to get a sense of the value of an ancient coin. The coin in question is quite interesting. It is an arresting denarius of Augustus struck between 18 and 19 BCE at the Spanish mint of Caesaragusta, modern-day Zaragoza. On the obverse is a youthful laureate head of Augustus facing right (although there are several examples with the bust facing left), surrounded by a simple legend stating CAESAR AVGVSTVS. However, Augustus isn’t wearing the traditional laurel wreath. Instead, he is wearing the Corona Civica, or Civic Crown – a much rarer oak wreath awarded to an individual who had personally saved the life of a Roman citizen. In the case of Augustus, this was referring to the entire Roman citizenry.

The “star” of the coin, so to speak, is the reverse design. A large, seven-tailed comet with the tail facing upwards dominates the reverse. In the summer of 44 BCE, the same year that Julius Caesar was assassinated, a comet appeared in the sky, signaling to the Romans that Caesar had become a god. This comet helped Augustus persuade the Senate to officially declare his uncle as being a deity and creating the Imperial Cult. Splitting the star’s rays is the legend DIVS IVLIVS, which means “Divine Julius”. The legend shows clearly where the importance of the reverse design lies–especially since on January 1, 42 BCE, Caesar was the first in a long line of historically real Romans to be officially deified by the Senate.

Visible for seven days, this comet came to be known as Caesar’s Comet, or the Sidus Iulium (“Julian Star”), and was used as a pictorial reference to Caesar’s divinity. While Romans such as Publius Sepullius Macer and Marcus Sanquinius used the star (as demonstrated on these two denarii), it was only as a small field device and not the main element. 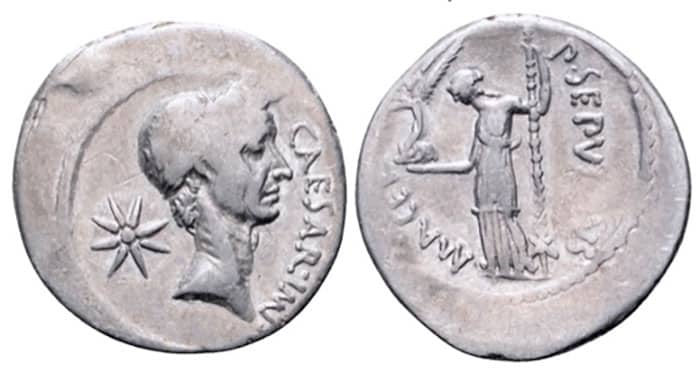 The shift to employing the Julian Star as the main reverse design element reinforced the familial and dynastic links between Julius Caesar and Augustus. Since Augustus was posthumously adopted by Caesar, he needed to use every tool available to reinforce his legitimacy. The Julian Star was also used by Augustus to promote the Secular Games (Ludi Saeculares) of 17 BCE, especially in connection with his uncle’s memory. In fact, this specific design was struck for the two years (19-18 BCE) leading up to the games.

Like many ancient coins, this design has a range of values based on the condition and eye appeal of the specific example in question, with extremely high-grade pieces commanding a significant premium and low grade or damaged coins selling for lower if not bargain value prices.

For example, in 2017, this heavily smoothed coin from the Dr. Michael Popoff Collection was sold by Stack’s Bowers in their May Collector’s Choice Online Auction for just under $400 USD. While the coin received a 5/5 for strike when graded by NGC, the smoothing greatly detracts from the piece’s eye appeal.

Interestingly, a broken and repaired piece sold by Agora Auctions in 2015, only sold for $210 even after several bids. Most likely due to the areas of corrosion and the large portion of the flan that had broken off and been reattached, as can be seen in this picture below. This is proof that a relatively high-grade coin that has nevertheless been tooled still holds more value in contrast to a low-grade damaged piece.

While the piece sold by Agora Auctions had a particularly low price, it is not unusual for other damaged, worn, or counter-stamped examples to range between $300 to $500. In fact, a heavily damaged and tooled piece with a starting price of €300 ($320 USD) that was up for auction by the Italian company Bolaffi in their December 2021 sale (pictured below) didn’t sell. Previously, prices were much lower, with a “fine” example sold by Classical Numismatic Group (CNG) in their February 2004 Electronic Auction for only $75. It was, however, in relatively poor condition, with the reverse design being heavily worn. It perhaps did not deserve the “fine” designation.

If one’s budget allows, a collector can move up slightly to target pieces in mid-grade condition that have significant eye appeal but are not truly lustrous or in Mint State. These pieces, worth between $600 and $1,000, would make a fine addition to any collection. For example, despite the countermarks on the reverse, this piece that was auctioned by Tauler & Fau in their November 2021 auction for €550 ($588 USD) has some truly spectacular toning on the obverse. If it were not subject to the premium added by the toning tax, this piece would have sold for maybe up to $150-$200 less.

Moving on from the low to mid-range, we find ourselves in the mid-high range. These coins are almost always in nearly Mint State condition with comparable prices.

Even though definitely not from the same dies, this coin is very similar to the toned and counter-stamped example displayed above. When struck at the Caesaragusta mint, the dies were slightly off-center, and the flow lines show how the material slid sideways between the two dies. Even with the off-center strike, the piece is still of fine style and in extremely good condition. It hammered for $1,700 in CNG’s 2020 Electronic Auction 477. Interestingly, when you factor in auction fees, despite the minor condition differences it would have actually cost almost the same as the next coin. While this coin was preserved in a very similar condition to the previous example, with comparable scratches on the reverse and wear on the hair of the obverse bust, it sold for $2,250 on CNG’s Web Shop – $550 more than the example above. This was due to several factors.

Firstly, the reverse design is better centered, with all-important design elements completely present and most of the beaded border included as well.

Secondly, on the obverse, the legend is better defined. Also, the bust is of a slighter better style. Since these are all very slight issues, it is evidence that in high grades, the price of these coins is extremely dependent on eye appeal!

Continuing on, at the far end of the quality and price spectrum are extremely high-end coins worth thousands of dollars. The piece below, for example, was sold last year by ROMA Numismatics in their June 2021 auction, where it hammered for £3,200 (about $4,025 USD). With both faces perfectly centered, practically no wear, and just a hint of iridescent blue toning, this coin is a showstopper.

Another high-end example sold in Heritage Auctions May 2022 Central States Signature Sale, for $5,750 (about €5,458). This may indicate a general increase in prices because, as can be seen below, this attractive coin–while still highly lustrous–is not quite as well preserved as the previous example. Despite not being perfectly centered and showing some wear on the obverse bust of Augustus, the coin sold for over $1,700 more than the previous example.

Even though coins of this quality can get quite expensive, they will always be popular since they are among the highest quality examples of this type currently available. While nicer examples have sold for over $6,000, these pieces rarely come to auction and are difficult to acquire.

But one of the nice things about coins that are rare(ish) but not unique–unlike, for example, an Eid Mar silver denarius of Brutus–is that they are obtainable by most collectors. Regardless of what price point you can afford or in what condition you collect, there is an example of this coin out there for you.