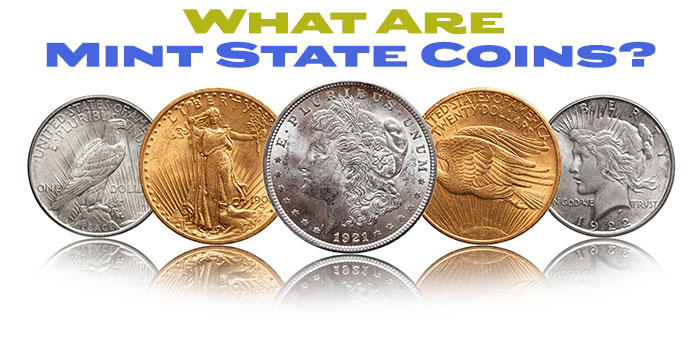 Even if you are relatively new to coin collecting, you probably already know that the value of a coin is directly tied to its condition. When it comes to assessing a coin’s condition, the most important distinction is between coins that are circulated, or worn, and those that are uncirculated, or have no visible wear.

A “Mint State” coin is one that is uncirculated and looks much like it did when it was made. In other words, it has at least some degree of luster, though it may be dull, and the details of the design are distinct.

However, for some coin series not all the details will appear clearly struck, and examples that have those qualities are more desirable and valuable.

Determining whether a coin has any wear is not always an easy task, and Mint State coins can vary a great deal in terms of their quality, with many lower-end Mint State coins having lots of distracting marks on their surfaces. In addition, some coins that are almost uncirculated, or that have been cleaned to make them appear brighter, may appear as if they are Mint State pieces but are not.

Mint State coins do vary–especially as far as what is known as eye appeal, which is how appealing the overall appearance of a coin is to the observer. This is something that will always remain subjective.

It is also important to understand that depending on how the coin was made and how it was handled during its production, a Mint State coin’s appearance can vary greatly from one coin or one coin series to another. And modern coins will almost always look much better than those made in the past.

For example, Morgan silver dollars that were sold in $1,000 face value bags that contained one thousand such coins – hundreds of thousands of which were discovered in vaults of the U.S. Treasury Department in the 1960s to the great delight of collectors – typically had substantial bag marks on them because the coins inside knocked against each other as the bags were moved around. An uncirculated example can be seen below. Note the bag marks on the cheek.

As for modern coins, consider silver bullion coins like the American Silver Eagle issued since 1986. Those coins are sorted into 20-coin rolls at the United States Mint, and then 25 of those rolls are placed inside a large green plastic box known as a monster box, which contains 500 coins. Those coins have tended to be of high quality from the beginning.

And over the course of time, the quality of these coins has improved substantially as the minting technologies of the U.S. Mint have continued to be upgraded. This is why top-graded examples are more frequently seen for later issues than they are for the earlier releases of this series. This situation led in the 1980s to the rise of third party grading companies – the two most influential ones today being Professional Coin Grading Service (PCGS), founded in 1986 by a group of dealers, and Numismatic Guarantee Corporation (NGC), founded by other dealers in 1987. Both PCGS and NGC have always guaranteed the authenticity of coins they certify.

Mint State coins can grade anywhere from Mint State (or MS60) to MS70.

Modern U.S. Mint coins, especially those made for collectors that are handled carefully during production, will often grade MS69 or MS70. In a classic series like the Morgan silver dollar, however, coins that grade higher than MS67 are seldom seen.

Nevertheless, modern circulating coins – especially those made since 1965 that are composed of an alloy of copper, nickel and other materials and cents made mostly of zinc– are seen much less often in the top two grades than are modern silver bullion and collector coins. This is why MS70 examples of modern circulating coins sometimes sell for thousands of dollars. As far as Mint State classic coins, the key to determining if a coin is Mint State is checking for signs of wear on the high points for that particular coin. For example, on the Walking Liberty half dollar, this means the center of the obverse (including the folds of Miss Liberty’s dress and the left hand) and the feathers of the eagle on the reverse (again in the center).

The key Mint State grades are MS60, which is a coin that has no traces of wear but does not have much eye appeal due to things like numerous contact marks; MS63, which has an attractive eye appeal but may have some distracting marks or hairlines in the key fields of the coin; and MS65, a very attractive coin with full original luster and only some light marks that are not in the prime focal areas.

Learning to grade is a process, and to do it well for the coin series that interest you will take time. Working closely with a trusted dealer like Bullion Shark can be very beneficial as is having some good books on grading that typically include high resolution photos of coins in different grades.

The best way to learn to grade is to see as many coins as possible such as at major coin shows; to take a course in grading – most notably the ones offered by the American Numismatic Association (ANA) and the major third party grading services; and to learn as much as you can about the particular type of coins that interest you and the grading characteristics of those coins.