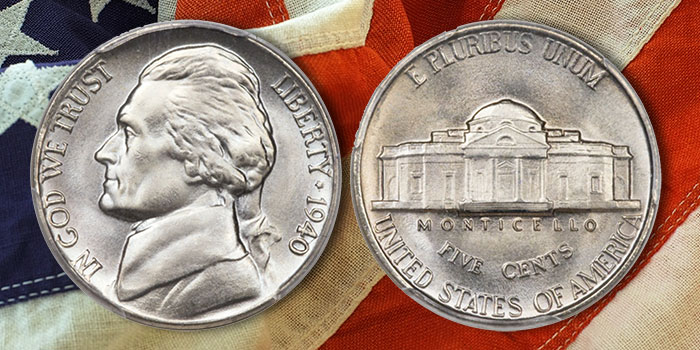 The Jefferson nickel debuted in 1938, replacing the Buffalo nickel in the 25th year of its production run. A design contest to commemorate Founding Father and third president of the United States Thomas Jefferson, open to “all American sculptors”, was held in 1937. German émigré and American artist Felix Oscar Schlag was the winner, receiving $1,000 for his effort.

Schlag’s concept for the obverse, which art scholar Cornelius Vermeule claimed was similar to Jean-Antoine Houdon’s 1789 bust of Jefferson, appeared essentially the same on the five-cent nickel for 66 years. His original reverse concept, however–featuring an innovative three-quarters perspective of Jefferson’s mansion Monticello–was rejected by the Treasury Department. Various changes were requested, the most significant of which being the flat, head-on portrayal of Monticello that is found on Jefferson nickels minted to this very day (though commemorative issues with different reverses have also been released). According to the rules of the design competition, the winning artist would receive no additional compensation for this extra work.

The Four Categories of the 1940

In order to break down the different pricing tiers of the 1940, we must break the coin down into four categories: circulated coins (like those typically found in change); uncirculated examples (like those typically sold in uncertified grades at coin shops); numerical Mint State coins (those in PCGS or NGC holders); and numerical Mint State coins with Full Steps designations (the most desirable of all Jefferson nickels for specialists).

Circulated to well-worn examples sometimes turn up in change. Due to the issue’s large mintage and the relative ease at which one can secure attractive uncirculated examples, circulated 1940 Jefferson nickels are not worth more than face value.

“Raw” Uncirculated specimens are a fair value, from about $1.50 for an example in Brilliant Uncirculated condition up to about $15 for one in “gem”.

Gem uncirculated grades translate to MS65 and above in certified grades. The terminal grade (meaning the lowest grade in which it is feasible to submit a 1940 nickel to a grading service for certification) is MS67. Even in certified holders, the $15 “gem” retail price holds for certified examples in MS65. In MS66, the market yields slightly more, but it isn’t until you get to MS67 that premiums of $100 or more are paid for 1940 nickels. An attractive example certified MS67 by PCGS brought $104 (with Buyer’s Premium) at a February 2017 Heritage Auction.

In viewing the certified populations at NGC and PCGS, Full Step examples of the 1940 (P) are more frequently encountered than nickels without this attribution. Nevertheless, one should not deduce that Full Steps nickels are more plentiful. In truth, Full Steps nickels carry roughly twice the premium as their regular counterparts and are therefore more profitable to submit. We believe that a significant number of non-Full Steps nickels were submitted in hopes of earning the designation. By comparison, a November 2017 Heritage Auction saw a PCGS MS67 1940 Jefferson nickel with Full Steps realize $234.

On the extreme end of the pricing spectrum is the price paid for one of three examples certified at the highest level graded by PCGS. At the March 2016 ANA National Money Show in Dallas, Heritage sold a PCGS MS68FS Jefferson nickel for $6,462.50. This example is virtually flawless, save for a tiny hit below Jefferson’s eye.

Finally, we get to the most coveted category of Jefferson nickel, fully-struck pieces with Full Steps. A number of references have been written about the Full Steps designation, but an easy explanation can be derived from the following graphic:

In this graphic, you see the steps, located on the design between the stylobate (a flat pavement section on which rest the four front columns of the design) and the foundation block at the base of the steps. Factors such as die condition, striking pressure, and incidental contact with other coins play a significant factor in whether a Jefferson nickel will earn the Full Steps designation.

PCGS uses the attribution FS, as did NGC until 2004 when that company split its designation into 5FS (for five full steps) and 6FS (for six full steps).

A left-facing bust of President Thomas Jefferson, including a colonial-era pigtail and strikingly similar in detail to the profile of Jean-Antoine Houdon’s 1789 bust, takes up the majority of the obverse. The top of his head almost touches the rim, and the barest of truncations is visible at the bottom where Jefferson’s left shoulder meets the edge of the coin. The motto IN GOD WE TRUST–which became the national motto in 1956–arcs clockwise along most of the length of the left side of the coin, starting from Jefferson’s chest and extending to his hairline. The inscriptions LIBERTY and the date 1940 run clockwise along the right side behind Jefferson. A small five-pointed star divides the two inscriptions 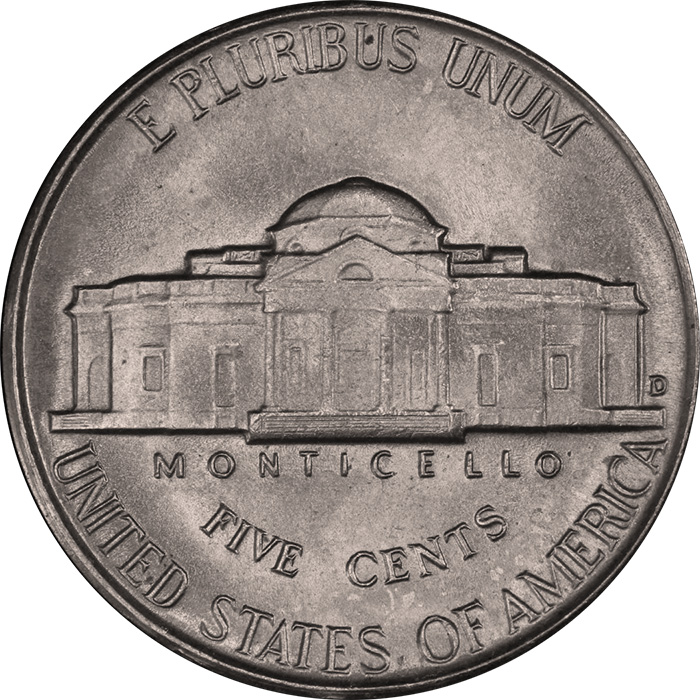 The edge of the 1940 Jefferson nickel is plain or smooth.