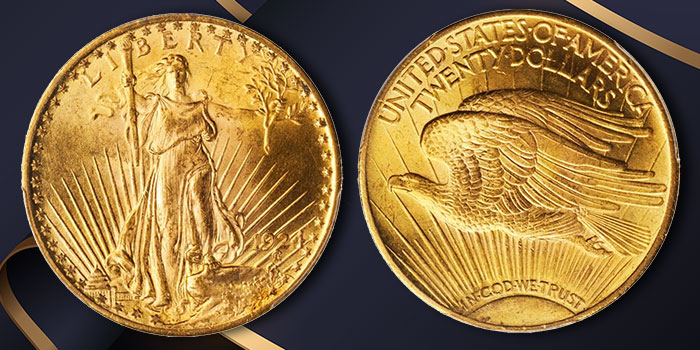 Acclaimed as one of the most beautiful and artistic numismatic designs ever realized in the United States, the Saint-Gaudens $20 gold double eagle is one of the most famous of all American coin types. Its existence came only at the insistence of President Theodore Roosevelt, who sought for years to beautify America’s humdrum coin designs.

Saint-Gaudens’ involvement in the process was meant to be more far-reaching than it ultimately turned out. The artist set out to redesign every denomination of America’s circulating coinage but fell seriously ill before this plan could come to fruition. In fact, what we have in the form of the Saint-Gaudens-designed $10 and $20 gold coins was made possible only due to the work of Saint-Gaudens’ assistant, Henry Hering.

The Mint’s first strikings of this $20 design came in the form of two dozen Proofs struck in March of 1907, each coin requiring nine impressions to realize the full detail of Saint-Gaudens’ high-relief design.

The Mint’s engraving department, led by Chief Engraver Charles Barber, was adamant that the high-relief models were completely impractical for use in striking circulating coins. Barber is often slandered in numismatic circles as being entitled, hard to deal with, and unprofessional to his peers in the U.S. Mint engraving department and to outside artists.

This could not be farther from the truth. And in the case of the double eagle design, he was absolutely correct! After a few versions of the double eagle proved too difficult to strike, Barber modified Saint-Gaudens’s design, lowering the relief so the coin could be struck with only one blow.

There was one more significant modification of the double eagle before President Franklin Delano Roosevelt ended circulating gold coinage in 1933. In 1912 the number of stars encircling Liberty on the obverse was increased from 46 to 48, marking the addition of New Mexico and Arizona to the Union.

While you will never find a Saint-Gaudens $20 double eagle gold coin in circulation (or any U.S. gold coin, for that matter), the 1924 issue is not a rare coin. In total, the United States Mint struck 4,323,500 examples. Most of these were recalled by the federal government through Roosevelt’s executive order, but hundreds of thousands of examples escaped confiscation.

When it comes to this date, coin dealers and telemarketers refer to it as “generic gold”.

The term “generic” may be offputting to some but in the rare coin industry, “generic” is routinely applied to a coin that has only a basic numismatic value over the coin’s intrinsic worth. In the raw, an About Uncirculated or Brilliant Uncirculated example would routinely trade at the prevailing spot price. In certified grades of MS63 and MS64, these generic Saint-Gaudens issues carry a premium of approximately 15% over the spot price.

In typically-found grades, the market value for 1924 Saint-Gaudens $20 double eagles is about on par with what we’ve already seen in our analysis of the 1923. A big difference, however, is that the quality of coins struck in 1924 tends to be much higher.

Whereas only a handful of examples of the 1923 issue have been certified by either PCGS or NGC in MS66, the 1924 issue is plentiful in MS66, readily available in MS67, and only becomes rare in higher grades. To date, only one example has been certified MS68 by PCGS. That coin last sold at public auction in January 2006, where it brought $63,250. NGC has certified three examples in MS68. One of these three coins brought $48,875 when Heritage offered it for sale in November 2005. At the time of publication, no 1924 Saint-Gaudens double eagle has been approved by CAC. Our read on the current rare coin market would put an estimated value of $80,000 for an MS68 and $120,000 for an example with a CAC sticker.

The date in Arabic numerals is near the bottom on the right; a monogram of the designer’s initials ASG is below the date.